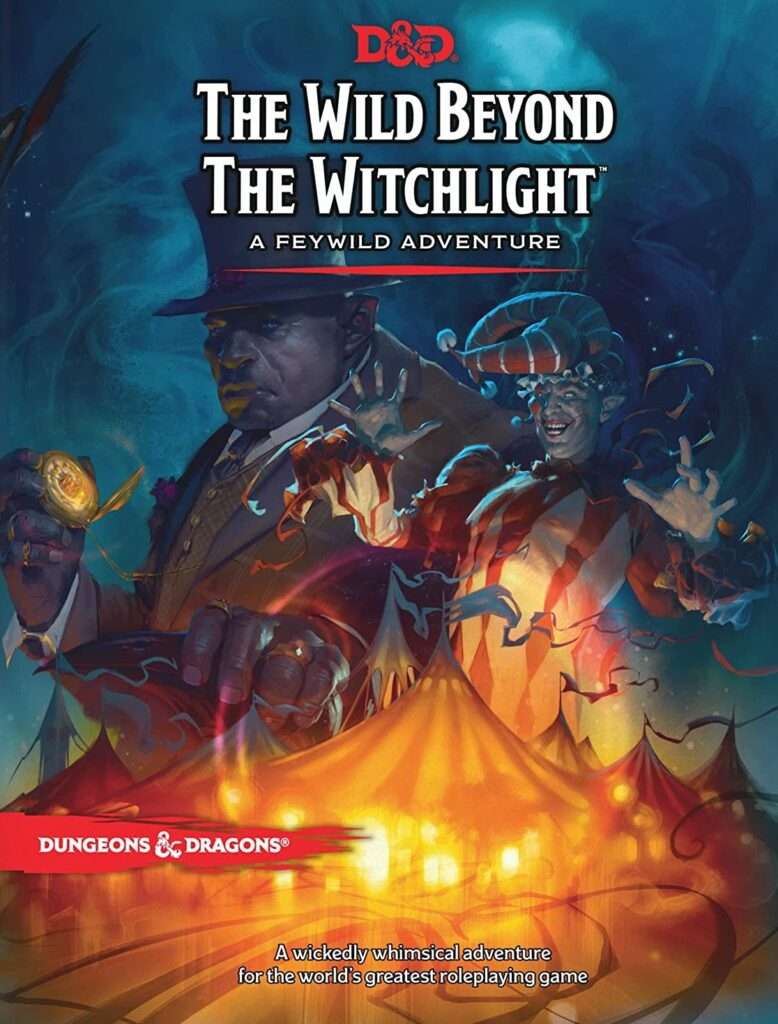 It is no secret that the fanbase for Dungeons & Dragons has changed dramatically in the last several years. When I was kid just learning the ropes, the majority of D&D players were old wargamers who were more interested in number crunching and dungeon crawling than in actual role playing. These days, thanks to services like Youtube and Twitch, the hobby has reached a newer audience. This younger generation of D&D players have a bigger interest in storytelling and theatrics. Wizards of the Coast is aware of this shift and The Wild Beyond The Witchlight makes that very obvious.

What we have here is an adventure module that caters more towards roleplaying and grandiose narrative than anything that’s come before. In fact, it’s become quite popular to mention that players (if they are crafty enough) can actually complete this adventure without engaging in a single round of combat. The adventure is intended to take characters from level 1-8 and it’s not specific to any particular campaign setting. But unlike most adventures, this one seems to be very self contained. What I mean by that is, the story assumes that the players will all be using fresh characters. These characters have a background that ties directly to the adventure in a specific way. The basic gist is this, every eight years a mystical carnival appears somewhere in the game world. It has just returned and each of the players are eager to visit. At one point in the past, when the carnival previously appeared, each of the player characters had snuck in without paying for a ticket. As punishment, the characters each lost something of value (maybe an item, or a personality trait). You see, this is no ordinary carnival it’s operated by a variety of magical fae creatures. Once the characters revisit the carnival they will likely find themselves swept up into a number of various adventures that will take them into the Feywild, a magical plane.

The Feywild is not a new concept by any stretch of the imagination. It has existed in D&D lore for decades. But this product is the first time we’ve had a detailed look at it since the release of 5E. The carnival mentioned above serves as a steppingstone to introduce the characters into this new realm of adventure.

The first chapter of the book serves as an introduction to the carnival itself. It’s essentially a playground of activities for DMs and players. The next four chapters detail specific areas of the Feywild and the adventures that take place there. One thing worth noting about this adventure is its very open structure. Both the carnival and the various areas of the Feywild introduced here are presented in a sandbox fashion. Some DMs are bound to like this format while others are likely to hate it. Either way, I have to admit that the presentation does suit the contents of the adventure quite well.

As expected, there are new background options for players that directly relate to the adventure. There are also two new playable races: Fairies and Harengon. But the big bonus for me was the inclusion of a slew of fae-based monsters. There’s a number of classic D&D monster stat-blocks here! The majority of which have never seen an official 5E treatment. So I was elated to see so many monsters included.

I’m sure that long-time D&D fans are going to have mixed opinions on this product. As far as adventures go, this one is structured very differently than anything we’ve seen thus far. But, I don’t think that’s really a bad thing. Still, it’s hard to recommend this one to an inexperienced DM. Honestly speaking, I’m not sure I’m skilled enough to to run this with the degree of success that it deserves. But, I can’t wait to try!