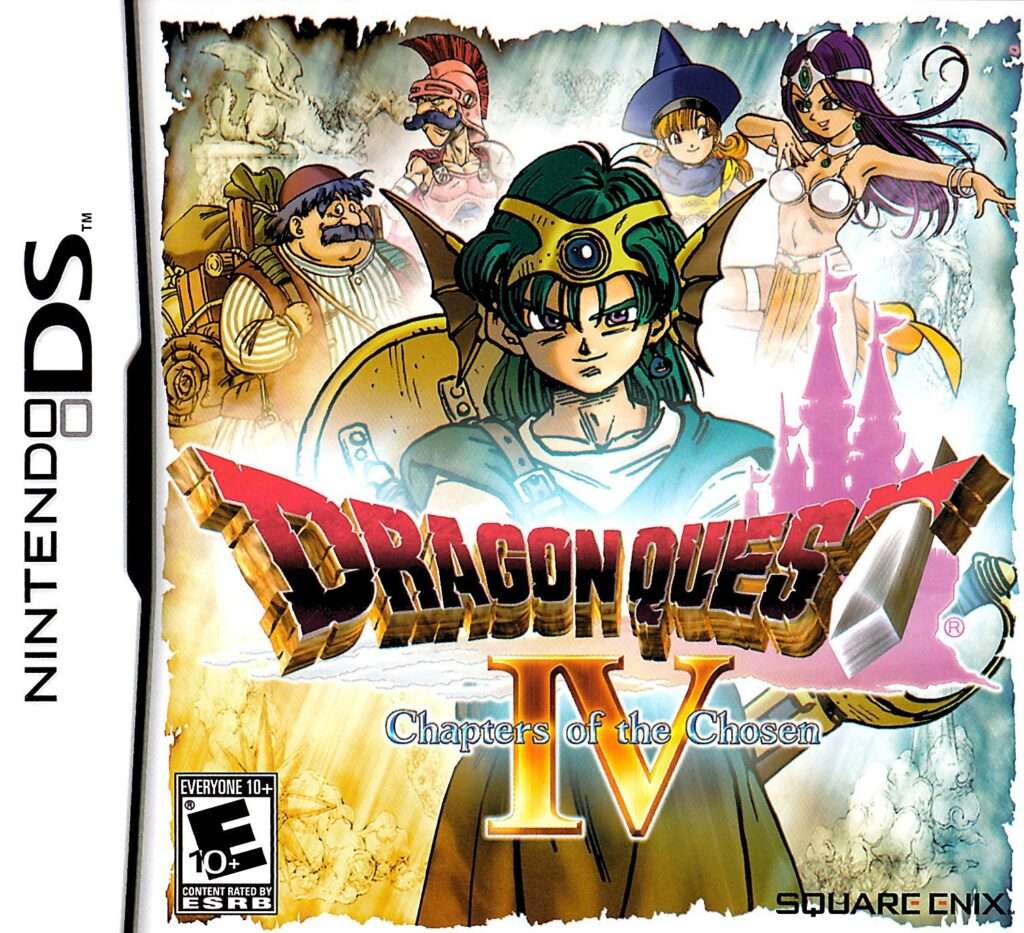 My backlog of RPGs has finally brought me to the fourth entry in the Dragon Quest saga, Dragon Quest IV: Chapters of the Chosen. I started playing this game back in early September and due to my busy schedule, it took me until mid-November to finish it. I think I clocked in right at about fifty hours of playtime with this title. So, I have a lot to say about it. But before I get into the meat of my review, let me start off with a little history lesson about the game itself.

Like the first three games in the Dragon Quest series, Dragon Quest IV was originally released on the NES. It was initially available in the west under the name of Dragon Warrior IV. An updated version of the game was later released for the Playstation in Japan. But sadly, this version never saw the light of day in the west. The NES release was the only official North American version of the game until 2007 when another update became available on the Nintendo DS. This updated version included a whole new English translation, an improved soundtrack, improved visuals, and additional content. (A revised version of the DS release was also later ported to mobile devices). I tend to shy away from mobile ports, so for my review, I played the Nintendo DS version of the game. I would love to see this game re-released on the Nintendo Switch with the same treatment that was given to the first three games in the series. But so far, there’s been no mention of any such plans.

This game marks the beginning of a new trilogy in the series. As it turns out, the original three games have come to be known as the Erdrick Trilogy (as they all focus on the bloodline of Erdrick the original hero). Dragon Quest IV is the first title in what is known as the Zenithia Trilogy (named after a floating castle that appears in the fourth, fifth, and sixth entries in the series). The subtitle of the game “Chapters of the Chosen” eludes to the fact that Dragon Quest IV is broken up into multiple chapters. Each chapter focuses on a specific hero or group of heroes.

Chapter 1: Ragnar McRyan and the Case of the Missing Children: This chapter introduces the character of Ragnar, a knight from the Kingdom of Burland. Players control Ragnar on his quest to find a number of children who have gone missing from the kingdom.

Chapter 2: Alena and the Journey to the Tourney: This chapter focuses on the character of Alena, a tomboyish princess who runs away from home in order the experience the world outside of her kingdom.

Chapter 3: Torneko and the Extravagant Excavation: Here we are introduced to the character of Torneko, a merchant who has aspirations of being one of the best salesmen in the world. To accomplish his goal, he sets out on a journey to find a mythical treasure.

Chapter 4: Meena and Maya and the Mahabala Mystery: Meena is a fortune teller and her sister Maya is a dancer. The two sisters team up to hunt down their father’s murderer.

Chapter 5: The Chosen: This chapter ties all of the others together. Here the game reintroduces the hero that was created by the player during the prologue. In the early parts of this chapter, the hero’s town is attacked by a powerful demon. The attack levels the village and leaves no one alive except our hero. It is during this chapter that the hero meets up with the other characters from the previous chapters and forms an alliance to hunt down the demon.

Chapter 6: This bonus chapter serves as an epilogue of sorts. It was added to the game as part of the Japanese PS1 remake. It includes a bonus dungeon and also helps to tie up a number of loose ends lorewise. 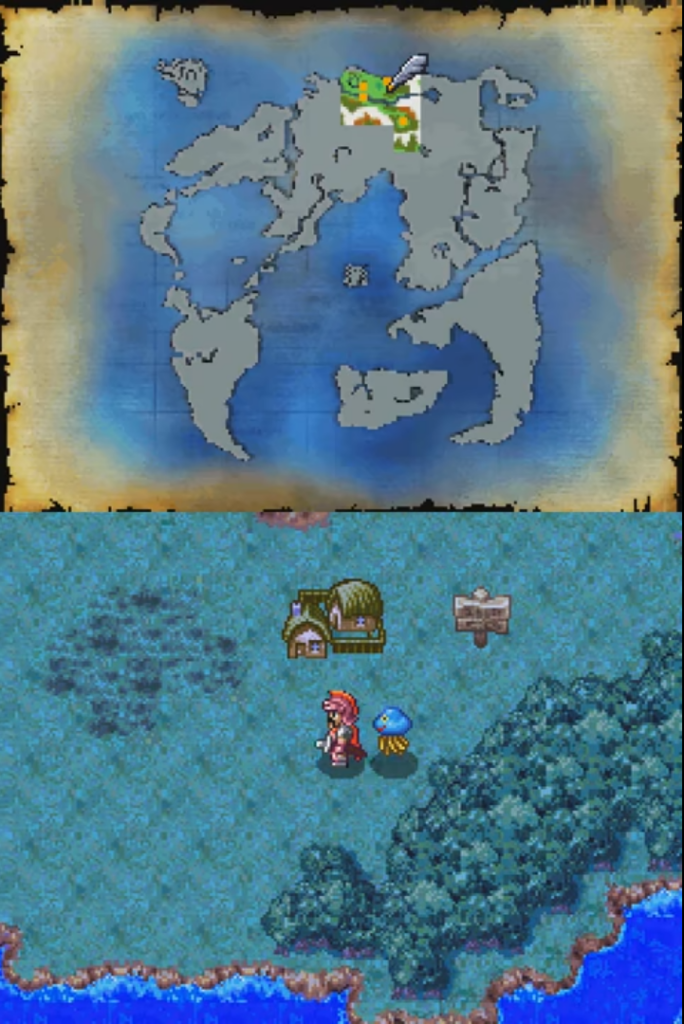 Your experience with the game will vary greatly depending on the version you choose to play. There is a certain charm to the classic 8-bit version. But due to all of the updates and improvements, I can easily declare that the DS (or mobile) version is probably the definitive experience. Still, this version is not without its flaws. For starters, unlike the Switch versions of the Erdrick Trilogy, any western release of the Dragon Quest IV contains a little bit of censorship. Admittedly, there’s nothing removed that detracts from the storyline. But don’t expect any “puff puff” references in this game. Also, the DS version suffers from the occasional stutter and lag (especially true when in town with lots of characters on the screen). Still, the DS version does include some absolutely beautiful artwork.

The biggest change that this game brings to the series is the introduction of the characters using individual chapters. At first, I was thrown off by this format. The game started off normally enough in the prologue. But then suddenly, I’m starting a new story with a completely different character. Of course, by the end of the game, all of the characters come together and everything ends up making sense. In retrospect, it ends up being quite a clever way to present the game.

Of course, the presentation isn’t the only thing that’s new. Dragon Quest IV also introduces a new tactics-like AI system for additional party members. This allows the player to control the main character, while letting the other members act on their own. However, this is optional and players can still choose to have complete control over every character. 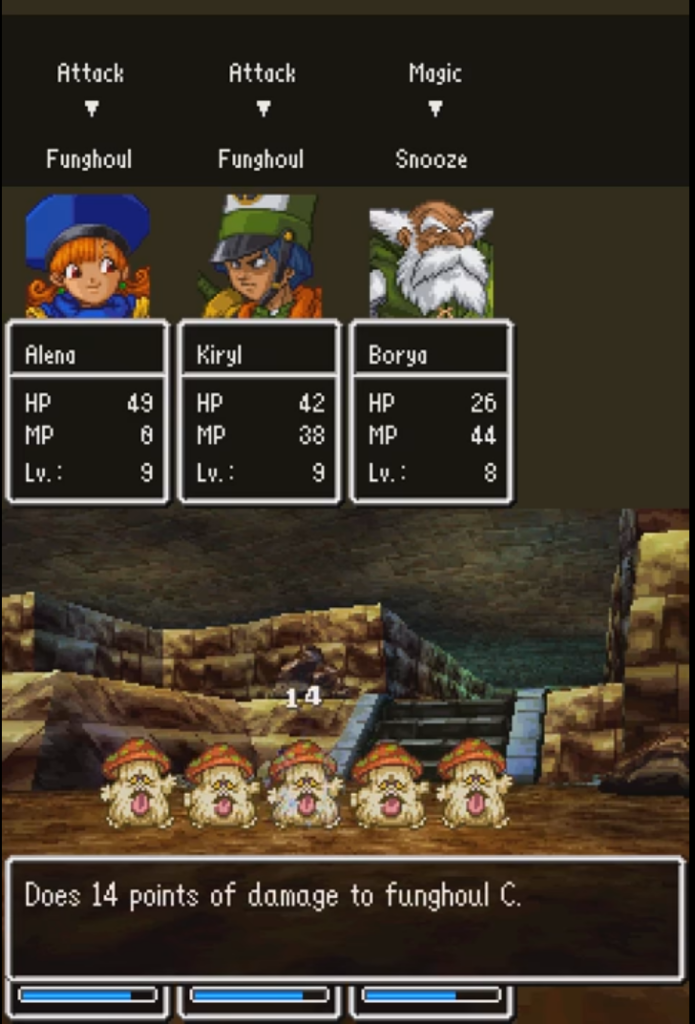 When compared to the Dragon Quest games that came before it, Dragon Quest IV is a bit of an odd duck. I can certainly see a number of ways that this entry tried to evolve the series. But for every step forward, there’s also quite a bit of regression. For example, Dragon Quest III allowed players to create party members from scratch. (Something that’s long been a staple in western RPGs). This mechanic combined with rich storytelling and an anime art direction, really helped DQ3 to feel unique. This game backed away from that level of customization and reverted back to premade characters. Now, I’m not saying that’s a bad thing per se. But it does make me wonder just what the developers were shooting for.

There’s no denying that Dragon Quest IV was a revolutionary title for its time. I wish I had experienced it back when it was still new. Playing it today for the first time, I have to admit that it’s hard for this game to stand out amongst all of the other JRPGs of the age. At least with the first three games in the series, there were enough unique elements in them that they were able to stand out from the crowd. This game isn’t really able to make that claim. Still, there’s plenty here to enjoy, especially for fans of the genre. 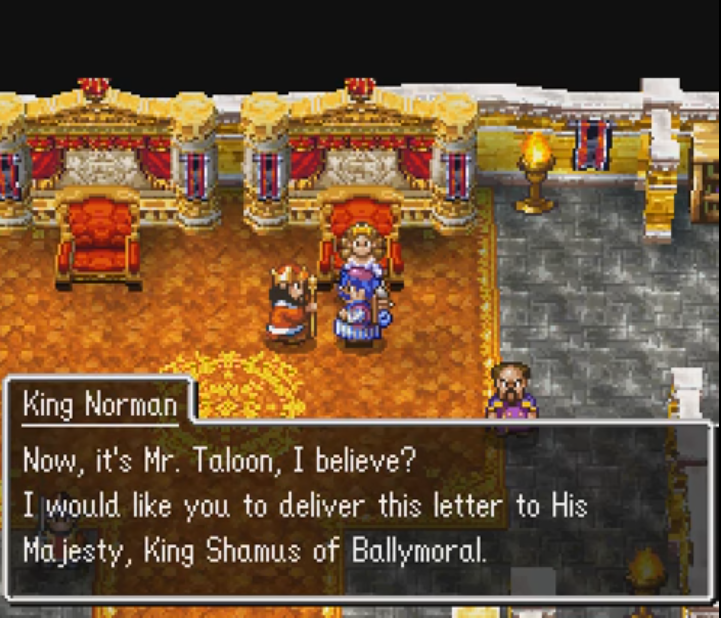 Difficulty: Medium –  It’s really tough to gauge the difficulty of this particular game. The first few chapters in DQ4 are actually fairly easy. But from the fourth chapter onward, the difficulty spikes considerably. Still, it’s easy enough to grind away some levels and gear to overcome most difficult encounters. The game’s biggest challenge actually comes from the optional dungeon in the bonus chapter. But again, a little preparation goes a long way.

Story: The presentation of multiple characters and storylines is a big selling point for this game. It’s also fun to see how all of these characters tie together in the last half. All of DQ4‘s chapters are very well done and are quite entertaining.

Originality: Many of the core gameplay concepts in this title have been seen before. But what makes this game a little different is the presentation. By presenting the storyline in multiple chapters, players are able to get a sense for the unique backgrounds of each individual character. This makes Dragon Quest IV seem more like an series of interactive legends, which has a nice appeal to it.

Soundtrack: As expected, this game contains some amazing classical-style compositions. It’s been true for every game in the series so far, and this one is no exception. The soundtrack is a pleasure to listen to.

Fun: Players who relish JRPGs are likely to find this game enjoyable. There’s more story and lore than you can shake a stick at. Plus, the game itself is quite entertaining.

Graphics: DQ4 continues Akira Toriyama’s art direction. This is seen in all of the promotional materials for the original Japanese release and it carries over into the game itself. The original 8-bit release looks pretty rough at times, even for an NES game. It’s not bad, but it certainly could have been better. The DS/mobile release, is hands-down the best looking version of the game. Most of the monster/character art actually looks hand drawn in this version and the rest of the graphics are vibrant and colorful as well.

Value: Getting your hands on a copy of this game is going to be a little tough. DS titles are getting difficult to come by and any place that still has a sealed copy is likely going to sell it at an inflated price. I’ve seen some new copies go for $100-$300. Used copies can run anywhere from $30-$100. Even copies of the old NES version tend to be overpriced. Hopefully, we will see an affordable digital release of the game at some point in the future.

Overall score (1-100): 85 – Dragon Quest IV is a solid JRPG with some pretty novel concepts. As far as the game itself goes, it’s a pretty standard JRPG. That’s not a bad thing at all. But, at least to me, it doesn’t shine quite as bright as other entries in the series. The gameplay is well designed, but it doesn’t really offer much that we haven’t seen before. It is the storyline is real the gem in this title.