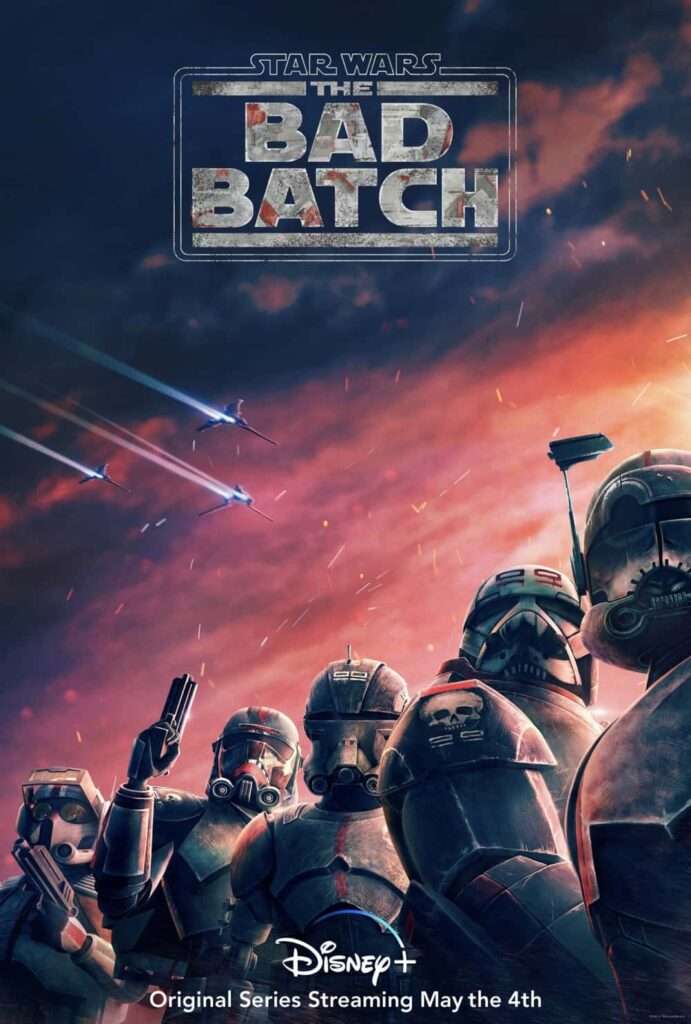 It look a little longer than I wanted for me to get this post out. But as they say, better late than never! It’s been over a year since I shared my thoughts on Star Wars: Resistance. Resistance was a show that didn’t really tickle my fancy. Maybe it’s because it was aimed at younger viewers, I don’t know. But for whatever reason, I just had a really hard time getting into it. That being said, I was very apprehensive when I learned about Disney’s next animated Star Wars series, The Bad Batch. In fact, I put off watching the show until the first season was complete. But I did finally settle down and binge watch the whole show. And now I’m ready to provide my critique.

If you watched the final season of The Clone Wars, than you are already familiar with the Bad Batch. The Bad Batch is a group of semi-defective clone troopers, each with their own unique traits. Initially, these clones were considered rejects, but it soon became apparent that when working together, their unpredictability was more of a blessing than a hindrance. In fact, this unit of troopers became legendary for their unorthodox tactics that always seem to prevail against insurmountable odds. Well, the Bad Batch proved to be extremely popular with fans. Disney noticed this and eventually they were given their own show.

The Bad Batch is very much an extension of The Clone Wars. In fact, the first episode starts off with The Clone Wars title card. But this only lasts a few seconds before it is replaced it with “The Bad Batch”. The series begins with the execution of Order 66. We get to see this event play out from the perspective of the Bad Batch (who due to their genetic imperfections, seem resistant to the order). In fact, it is at this moment that we actually get to see an important piece of Star Wars lore from a new perspective; the killing of Jedi Depa Billaba. In case the name escapes you, Depa Billaba was the teacher to a padawan named Caleb Dume (aka: Kanan Jarrus) – one of the stars of Star Wars Rebels. I mention this because we’ve seen this moment described before in the Kanan comic book. Interestingly enough, this time around, the event is portrayed a quite a bit different. Yes, the gist of it is the same, but we now have The Bad Batch injected into the moment. I mention this mainly because this retelling of the event is actually a pretty major retcon in the new canon. Until now, the Lucasfilm Story Group has done a fairly decent job at keeping the Star Wars canon running smoothly. But now, we actually have two official stories that contradict each other. I know I’ve gone off on a bit of a tangent here, but I can’t help but worry about what this means for the future of canon consistency.

All that aside, the show itself does a pretty fantastic job of providing insight to earliest moments of the Galactic Empire. Many long-time questions are finally answered. For example, why did the empire decide to conscript storm troopers instead of keeping a clone army? Well, the answer is found in this show. But for all The Bad Batch gets right, there’s still and handful of things that really annoyed me. This show, like so many other forms of Star Wars media seems intent on trying to link every aspect of the Star Wars universe together even when it’s completely unnecessary. Specifically, I’m talking about an episode where the Bad Batch encounter a young rancor. But instead of just letting this creature be some random unimportant rancor, it naturally has to be THE RANCOR from Return of the Jedi… why?!

Still, the show does introduce us to a new and very interesting character, Omega. Omega is intriguing because she is a female clone. That’s right, she’s just as much of a clone as all the others except her DNA was modified to make her female instead of male. The Bad Batch encounter her early in the series and take her under their wing. Omega ends up being a major character in the show, but due to her age she’s often a liability to the group. Still, I’m excited to see just what becomes of this character in future seasons as she matures.

I will say that I enjoyed this show much more than Resistance. It certainly had its epic moments. But it didn’t seem to capture my attention like the later seasons of the The Clone Wars did. Still, I’m very curious to see what happens next. With that in mind, I’m definitely looking forward to season two. Let’s see if Disney is able to polish this series up enough to give it the shine it really deserves.