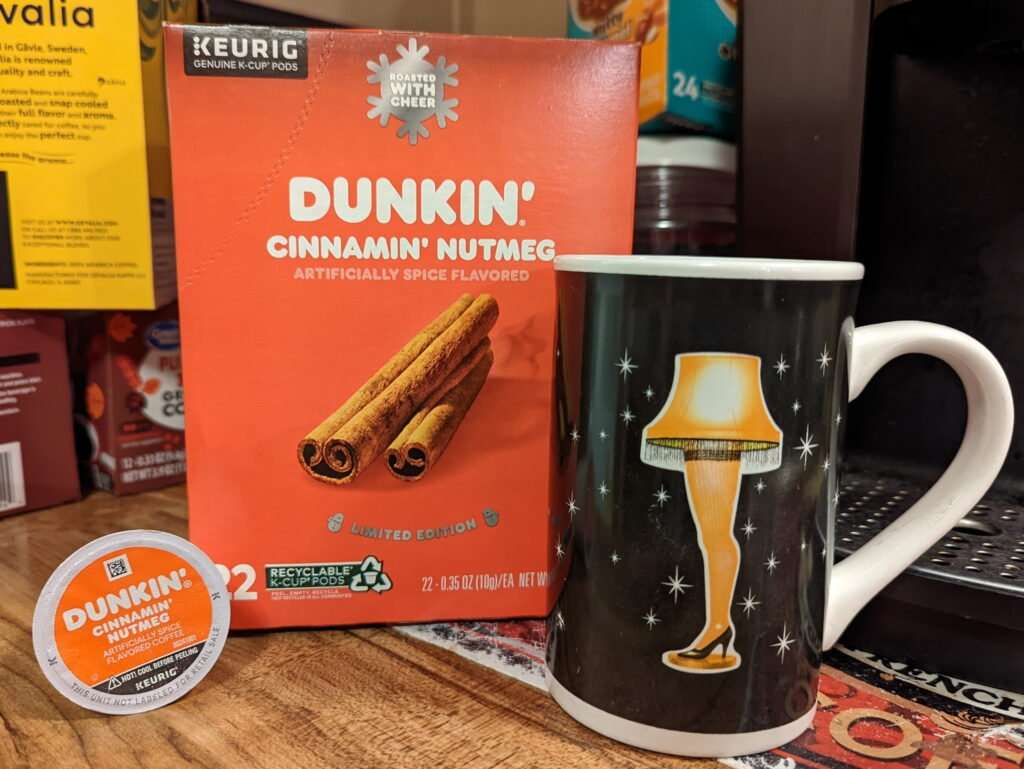 Last year I tried just about every holiday-themed coffee I could get my hands on. This year, I’ve decided to dial it back a bit. Since my last seasonal coffee review was for a Dunkin’ product, I figured I’d continue the trend and check out their Christmas offering for 2021; Cinnamin’ Nutmeg. Generally speaking, I’ve always had pretty good luck with cinnamon flavored coffees. Maybe it’s because it is an easy flavor profile to capture without having to resort to a lot of artificial nonsense. Whatever the reason, the majority of cinnamon coffees I’ve tried, I’ve always given really high praise to. That being said, let’s see how this one fares.

The first thing I noticed when I picked up the box was the “Artificially Flavored” tag under the name. This struck me as odd because like I mentioned above, real cinnamon is a pretty inexpensive ingredient (as is nutmeg). So why go through the trouble of developing or buying a phony flavor? Regardless, this revelation only made me even more curious. The coffee itself is a medium roast with a very strong cinnamon aroma. This is especially true during the brew process. I have to admit, the kitchen smelled pretty good while this coffee was being prepared. There was no hint of the sickly sweet smell that can sometimes accompany cheaper flavored coffees. So that’s a good start.

The coffee itself is very light tasting. It’s smooth with hint of nutmeg and and a strong cinnamon finish. To the astute drinker, it will be obvious that there’s no real cinnamon present in the blend. It doesn’t have the “bite” that often accompanies a brew flavored with the real thing. But to be honest, that doesn’t have to be a bad thing. For many, that actually makes this coffee a little more approachable.

The coffee was pretty good on its own. But I should also note, that I feel the flavor here was considerably enhanced by adding a bit a of cream to the cup. This is a good indicator that this would probably be an excellent candidate for an iced coffee (although I didn’t try it over ice).

In the end, this is a fairly decent offering from Dunkin’ for this holiday season. But I didn’t enjoy it as much as other cinnamon flavored coffees I’ve tried in the past (Cinnabon for example). Still, that isn’t intended as a negative. Dunkin’ certainly has nothing to be ashamed of with this flavor.

Would buy again?: No. While this is not a bad coffee at all. I feel that there are better alternatives.