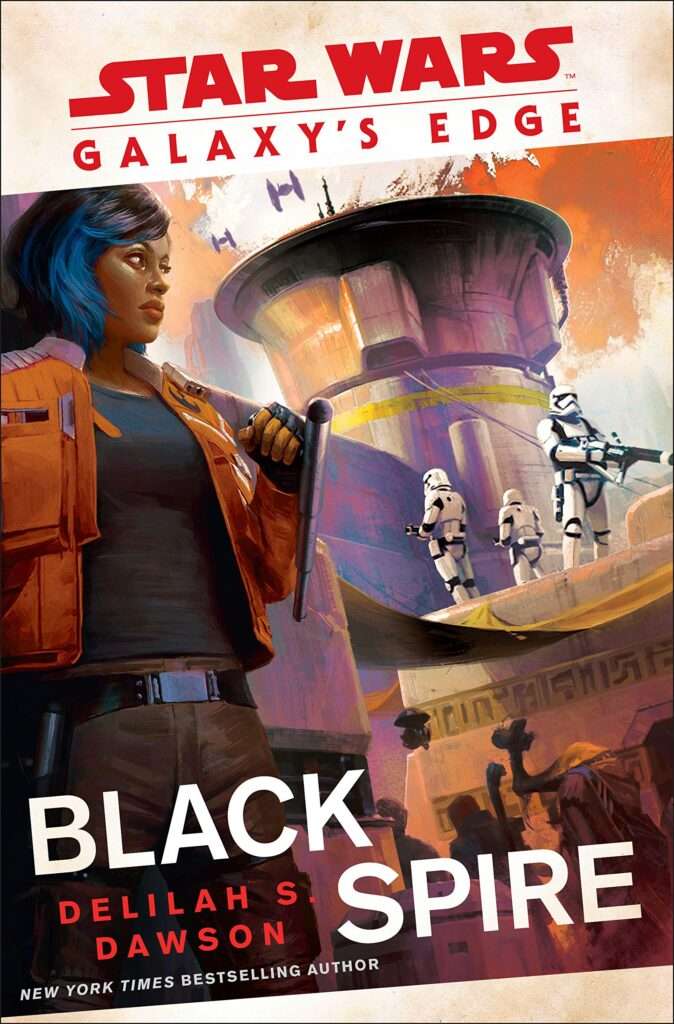 The last time I reviewed a Star Wars novel it didn’t go very well. The book in question was A Crash of Fate. This was a novel created for the sole purpose of drumming up hype for Disney’s new Galaxy’s Edge theme park. The story itself wasn’t terrible, but it wasn’t particularly good either. In the end, the book appeared to be nothing more than a cheap tie-in with no real value to the Star Wars universe. This brings me to the next book on my list and it is another one with the “Galaxy’s Edge” banner; Black Spire.

Like the previous Galaxy’s Edge book, this one was also commissioned as a theme park tie-in. The biggest difference here is that this book is aimed at adult readers, whereas A Crash of Fate is geared towards a more youthful audience. Still, just knowing it was a tie-in immediately made me a bit wary. But, the more I learned about this book, I began to feel a bit hopeful. For starters, it is written by Delilah S. Dawson. This is the same author that gave us Phasma – an absolutely wonderful book. In fact, Black Spire actually a sequel to that book!

Black Spire focuses on the character of Vi Moradi, a member of the Resistance. If you read Phasma, you may remember this character as the resistance spy that was captured by Captain Cardinal of the First Order. In that book, she relays Phasma’s backstory to her captor. At the conclusion of the novel, Moradi manages to not only escape custody but actually returns to the resistance with Cardinal as her prisoner. This book takes place shortly after the events of both Phasma and The Last Jedi. The New Republic has been crushed by The First Order. Only the Resistance remains. In the wake of this tragedy, General Leia Organa sends Vi Moradi on a mission to the far away planet of Batuu. Her goal is to assess the world and see if might be a suitable location for a secret Resistance base. Moradi is more than happy to take the assignment until she learns that she is to be accompanied by Cardinal (who has since defected to the Resistance and is now going by his birth name Archex). From here the story focuses on Vi Moradi’s struggle with accepting Archex as trustworthy, while also scouting out an unfamiliar world and trying to win over the locals. Her efforts are further complicated when the First Order arrives on Batuu…

Right off the bat I can tell you that this novel is much more interesting than A Crash of Fate. For starters, the book itself is very well written. Plus, it focuses on a number of established characters. Even if these characters aren’t fan favorites, at least they’re still names some of the more hardcore fans will recognize. The pacing of the book starts off slow. It struggled to grab my interest in the first half. But, by around the halfway point, things began to improve immensely. In fact, I found the last quarter of the book to be quite engaging.

It is my understanding that a number of Galaxy’s Edge locations and characters are present in this book. Places like Oga’s Cantina and Savi’s Workshop are focal points in the novel. But, I’ve never actually visited Galaxy’s Edge at Disney so to me, these were just places detailed in a story. Still, this leads me to believe that maybe there is something to all this tie-in business after all. Someone who has visited these places at Disney, might end up getting a little a smile on their face when reading about them here.

So far my biggest issue with the book is the pacing in the early parts of the story. If I had to pick another criticism, it would have to be the overall bleak atmosphere of the story. From the very beginning everything is dismal. The New Republic has been decimated, Moradi is sent to backwater planet with the man that tortured her – you get the picture. On top of that, the lead character tends to whine. But, I’m nitpicking at this point. If I’m being honest, this book exceeded my expectation. But it’s still probably a little too obscure for anyone but the more rabid fans.

Story: Very well written, but suffers from some pacing issues. Excellent characters and a surprising level of detail about the culture of Batuu.

Recommended: For fans of the Galaxy’s Edge theme park or big sequel-trilogy nerds. Probably not for casual fans.