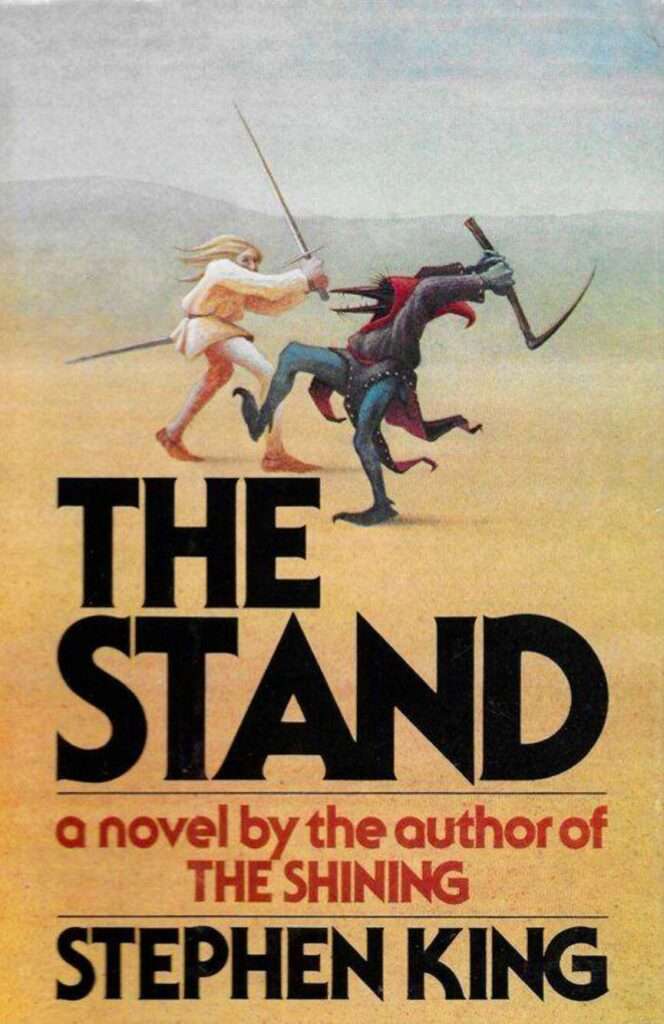 I know I typically save my Stephen King book reviews for the month of October. But last month, like so many other people, I found myself diagnosed with Covid-19. Thankfully, it was only the mild Omicron variant, so I recovered rather quickly. But still, it got me thinking about just how quickly Covid spread across the globe. It started out in a small seaside town in China and now there’s not any place in the world that’s safe from it. When I think about it I can’t help but draw comparisons to one of Stephen King’s most epic works; The Stand.

The Stand has gone down in history as Stephen King’s magnum opus. It was originally published in 1978, but revised and re-released in 1990. It is the story about the fall and rebuilding of society after a major plague. The virus featured in The Stand is known as Captain Trips. It is a man-made flu that escapes into the wild after a lab accident. The early parts of the book follow the story of patient zero as he tries to flee the lab (unknown to him, he is already infected). It details everyone that he comes in contact with and explains how the virus continues to spread, person-to-person. Over the course of several weeks, the virus continues to infect and slowly but surely, people all over the country begin to die. For whatever reason, a handful of individuals seem to be completely immune. The majority of these people seem to have nothing in common, they come from different backgrounds and share different values. But one thing brings them together – dreams. After the plague has run its course, the survivors all start dreaming of the same things; a friendly old woman and a mysterious dark man. Those people with pure hearts seem drawn to the woman and they begin to seek her out. Likewise, those individuals who are evil or self-centered seem dark to the dark man.

The bulk of novel deals with the relationships of the survivors. How they struggle with both their pasts and the uncertainty of the future as they work to rebuild society. But things quickly turn into a clash against the forces of good and evil. This of course, is a very cursory glance at the subject matter of The Stand. I could write for hours about the various themes founds in this novel. In fact, many have. People have argued about this book for decades. There’s whole discussion forums on the internet dedicated to it. But instead of diving that deep , I suggest that you simply read it for yourself.

The Stand is truly one of the greatest novels I’ve ever read. Sitting down with it this time probably marks my fifth or sixth read of it. Over the years I’ve owned both versions of the book. Having read both, I do recommend the 1990 Complete and Uncut edition. This version is significantly longer, and while it isn’t that much different, it does modernize the book a bit and includes some additional and interesting characters. Without a doubt, this is the definitive version of the work.

Until recent times, the subject matter of The Stand seemed impossible and far-fetched. But today, in a Covid-stricken world, it actually hits home in a big way. Imagine the same scenario we find ourselves in now, with the exception that Covid-19 is one-hundred times deadlier. What a frightening thought! But one that’s very possible. This fact only makes this book that much more terrifying.

Many people look at the size of this novel and immediately feel put off. The Stand is a BIG book. But don’t let that fool you. It’s quite a quick read because it sucks you in and doesn’t let go. Before you know it, you’re halfway through and full fixated on this frighting new world. Yes, it’s really that good. In fact, if you only read one Stephen King novel in your life, this is the book I recommend.

Recommended:  This is one that I recommend to nearly anyone. If you enjoy reading at all, this book should be on your shelf.