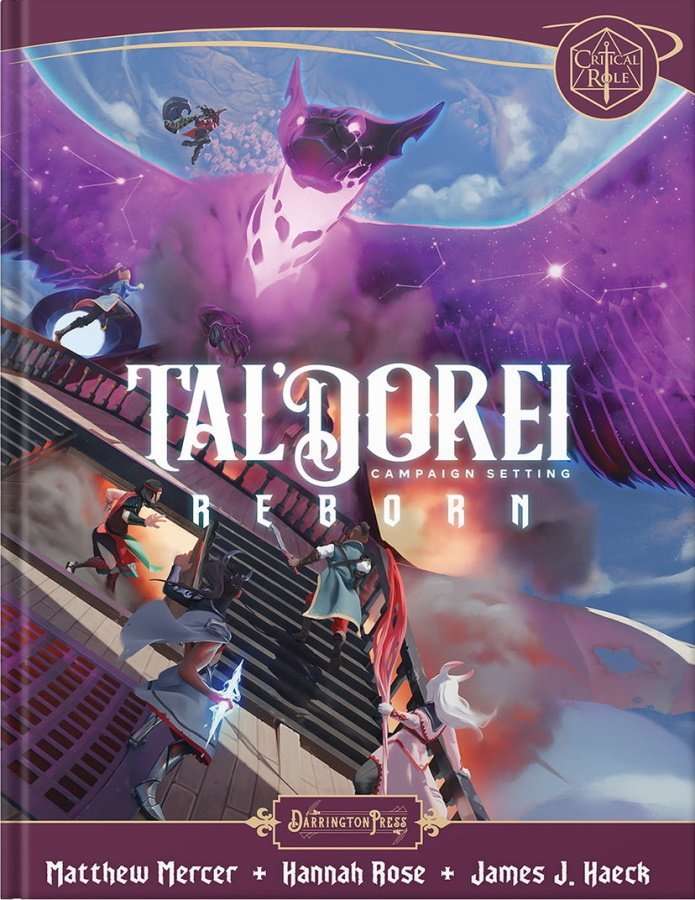 I’ve said it before but I’ll say it again; it seems like you can’t mention Dungeons & Dragons these days without someone bringing up Critical Role. The web show/podcast has taken the world by storm and introduced a legion of new fans to the hobby. This is something that every D&D fan should be grateful for. Personally speaking, I was a little late to the Critical Role party. But once I caught wind of what it was all about, I quickly became a fan. I don’t regularly watch the videos, but I do enjoy the audio podcasts. And once I got a taste of Matt Mercer’s world of Exandria, I was hooked.

A couple of years ago I posted a review for the original Tal’dorei Campaign Setting book. This was Mercer’s first attempt to bring his homebrew world to the table of other D&D and Critical Role fans. Publishing a new campaign setting is no easy task. But, for a first attempt, I think Matt Mercer knocked it out of the park. I was extremely impressed with both the quality of the book itself and the contents found between the pages. Well, quite a bit has happened since that book was released. The ongoing Critical Role campaigns have resulted in some pretty big changes to Exandria and Tal’dorei. For this reason alone, it is arguably time for an update. This argument is compounded by the fact that the original book has been long out of print. Well, for those of you wanting an update, your prayers have been answered. Now, five years after the release of the original Tal’dorei Campaign Setting, Matt Mercer is back with an updated and expanded version; Tal’Dorei Reborn.

The first thing I noticed about this book was the high quality of the product itself. In my opinion, there was really nothing wrong with the the first book. To me, the original seemed to be on par with most official D&D products. But after getting my hands on this release, let me tell you, it is a cut above. The quality of the cover, binding, and pages are unmatched. It’s something I noticed as soon as I removed the book from it packaging. This is without a doubt premium product. But enough of that, let’s get into the contents.

Let me state that even if you own a copy of the original Tal’dorei Campaign Setting, there’s still something for you in this book. For starters, it takes all of the events that happened during and after the original Critical Role campaign and works them into the existing world lore. This means that Tal’dorei Reborn features the world of Exandria approximately twenty-five years later. Not only that, but there’s plenty of content in this book that was not found in the original. In fact, it’s more than double the size.

The first part of Tal’dorei Reborn provides an updated look at the history of Tal’dorei and various lore tidbits (factions, religions, etc). The information presented here provides much more detail than what was found in the last release. The biggest section of the book is the gazetteer. Here we have a detailed look at various location found in Tal’dorei. Essentially everything a DM would need to know is here in excellent detail. As an added bonus, each area includes a number of possible plot hooks. This is something that I find very valuable and I was absolutely delighted to see it included.

The last half of the book includes a number of character options, DM tables, optional rules, important NPC details, and of course, monster stats. All of which are masterfully presented. A number of the character backgrounds are pretty campaign specific. But there’s also a handful that could easily be adapted for use in any D&D campaign.

If you missed out on the original book, have no fear. Tal’dorei Reborn supersedes that release in just about every way imaginable. If you’re looking to run a Tal’dorei based campaign, this book is your one-stop shop. In fact, the only reason you might still need the original Tal’dorei Campaign Setting is if you wanted to run a campaign based during the events of original Vox Machina timeline. But even then, it would be easy enough to take the material presented here and adapt it.

As Critical Role and WotC continue to partner up and release products together, third party releases like this book are going to become invaluable. If you are fan of Critical Role and you want to run a campaign based in Tal’dorei, this book is a must have.