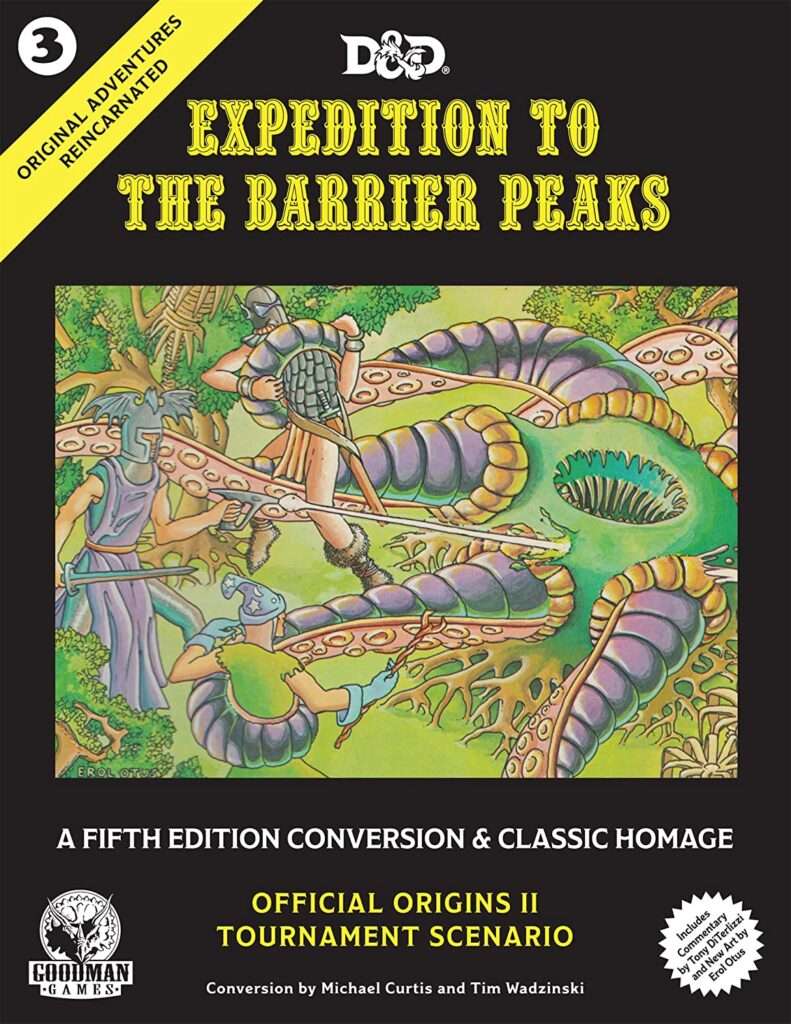 Its no secret that I’m a big fan of the Original Adventures Reincarnated line by Goodman Games. To date, I’ve discussed the first two installments in this series. Both of which were legendary D&D modules of great renown. I’m happy to report that the trend continues with the third entry in this line up: Expedition to the Barrier Peaks.

If you’re an old school tabletop gamer, then you probably already know why this module is so iconic. But if not, let me issue a warning. If you’re a player who has yet to experience this adventure, it’s probably a good idea to stop reading this article now. The plot of Expedition to the Barrier Peaks has a pretty massive surprise twist to it. And I’m going to be discussing it in great detail. So if you don’t want the premise of the adventure spoiled, you should not read ahead… you have been warned.

The original Expedition to the Barrier Peaks was a tournament scenario created by Gary Gygax for the 1976 Origins II wargaming convention. The adventure was later adapted for AD&D and released as a retail product. It is the retail version that this book is based on. Like all other OAR releases, this book contains both the original 1E module (both the first and second printings are included) and an official 5E conversion. The book itself is very well put together. The covers are sturdy and the binding is well constructed. This time around, Goodman Games also includes a ribbon bookmark that is secured to the binding of the book. This may sound like a trivial inclusion. But for a book this size, it’s a very nice touch!

On the surface, this adventure may look like just another old-school dungeon crawl. The players are sent to a wayward cave to investigate a series of unusual monster sightings. But after locating and exploring the cavern, it quickly becomes apparent that the “dungeon” within is very unusual. In reality, the cave is actually home to a crashed spaceship. Upon discovering the polished metal walls, alien corpses, and various laser guns strewn about the halls of the ship, most players will naturally figure out that this is no ordinary dungeon crawl. Once players discover that this adventure is a mixture of classic fantasy and science fiction, opinions will naturally be very colorful.

I had the pleasure of experiencing this adventure back in the early nineties during my first stint with AD&D. Once it dawned on me just what type of environment my party was exploring, I was fascinated. Swords and sorcery mixed with starships? What an awesome combination! But not everyone at the table felt that way. There was one player in particular who didn’t enjoy the idea. Moderns DMs running this adventure are likely to encounter the same division of opinion. For this reason, I don’t recommend dropping Expedition to the Barrier Peaks into your average ongoing campaign. The revelation alone of an alien civilization from outer space will more than likely change the direction of your campaign’s focus and lore. If you’re prepare for that sort of thing, then by all means, go for it. But if not, this adventure is probably more suited for a sandboxed campaign. Still, the look on players faces once they realize what’s going on is priceless. That alone makes this adventure worth playing.

As is the case with the other OAR releases, there’s plenty of extras included in this book besides the module itself. The book opens with a number of essays and articles concerning the legacy of Expedition to the Barrier Peaks. There’s also a number of player handouts as well. New additions for 5E includes options for setting the adventure in various campaign worlds, additional options for areas surrounding the entrance, new encounters within the ship, and a few updates that help correct errors found in the original publication. Some purists may not like these changes, but personally I find them welcome and very well done.

Overall, I’m very pleased with this release. My only real complaint has to do with the player handouts. These are scatted throughout the book and often times are grouped together on a single page. It would be much easier to have them isolated from everything else instead of just sandwiched in the middle of the book’s contents. As it currently sits, if you really wanted to “hand out” these images as intended, you’d have to find a copy machine and make photocopies to distribute to players. This is a big pain in the neck. I feel like Goodman Games could have done better. But I also understand the cost of manufacturing. This book already retails for $50.00. The average DM probably isn’t going to shell out much more.

I love these old school adventures. And Goodman Games is doing a fantastic job of making 5E compatible versions. Some people complain because these releases are really nothing more than simple stat-switches. They are taking old 1E rules and swapping them to the 5E equivalent. Aside from that, the rest of the adventure is largely untouched. Whereas many of the official WotC re-releases (Tales from the Yawning Portal for example) take much greater liberties and give these older adventures a more modern polish. Personally, I don’t understand the complaint. These OAR releases are classic modules that WotC is unlikely to tinker with themselves. As a DM running an adventure, you have free reign to change whatever you wish. OAR is simply taking these old modules and doing all of the conversion work for you. If you want to add, change, or exclude something – feel free! That’s what D&D is all about. I’m just grateful to know that someone else out there cares about these old classics as much as I do.

Expedition to the Barrier Peaks is available on Amazon and most retail bookstores where D&D material is sold. 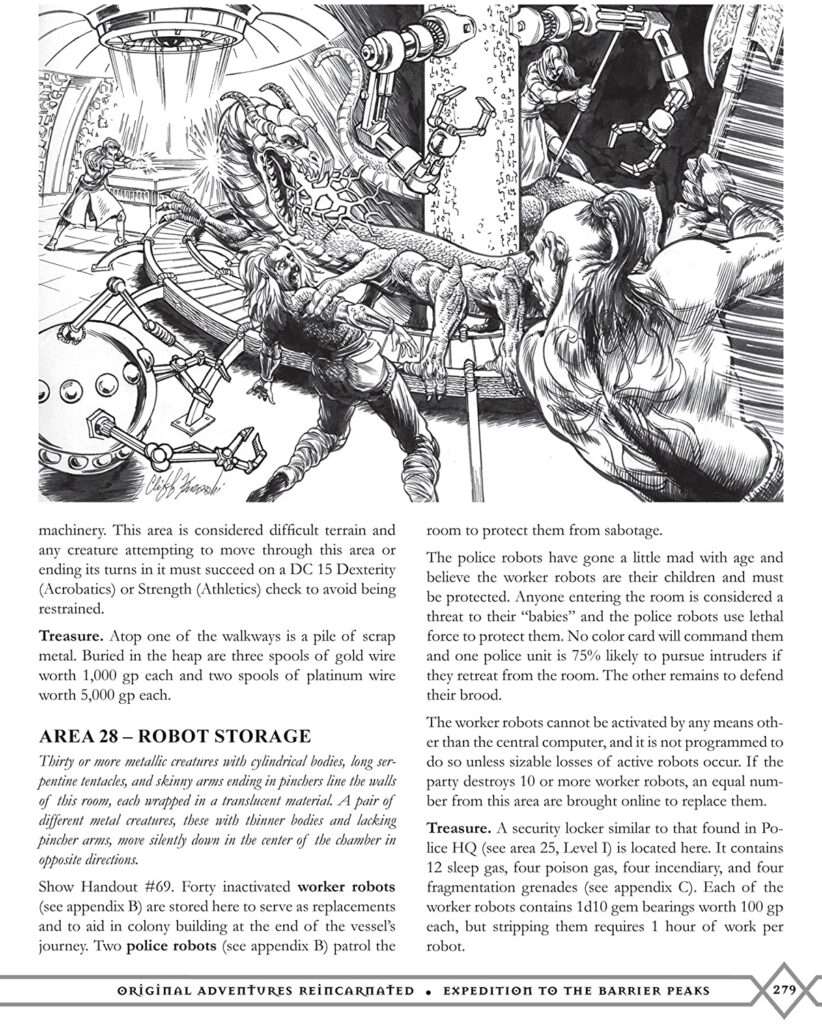