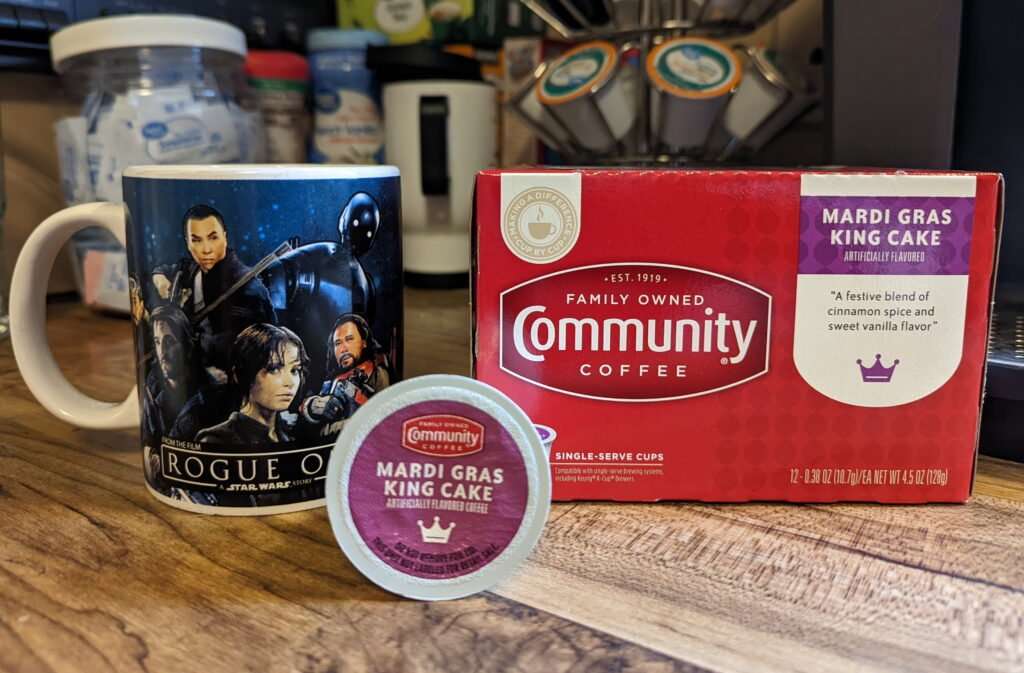 One of my favorite things to do is try different seasonal coffees. Fall is probably the best when it comes to variety. Winter is a close second. But the warmer seasons of the year don’t get quite as much love. Maybe this is because coffee is traditionally served hot, I don’t know. Spring and summer coffees are often blended with coconut or cream cheese flavors and, quite frankly, I’m getting tired of them. But this year I found something a little different. Community Coffee: Mardi Gras King Cake.

I know that Mardi Gras is over already. But we’re still in the Lenten season and king cake is a favorite of mine. So when I saw this on my local store shelf, I knew I had to snatch it up. I don’t drink it very often, but my previous experience with Community Coffee has always been positive. In fact, their Cafe’ Special is one of my all-time favorites. So with all this in mind, I was very excited to try this new find.

The coffee itself is a medium roast. The aroma during brewing was not particularly strong. But what I could detect seemed a bit blunted- which is odd. The scent of the coffee seemed to come out a little more as I added my favorite creamer. But what I was smelling wasn’t the coffee beans. Instead, my nose was detecting sweetness. This concerned me a bit because coffees that smell overly sweet often end up tasting syrupy. So it was with a little hesitation that I took my first sip…

The artificial flavor of this coffee is definitely front and center. Vanilla is the most prominent taste, but the cinnamon notes are certainly detectable. The syrupy aftertaste is certainly present. But it’s not as offensive as some of the other coffees I’ve had in the past. The flavor itself is not terrible. But it is a bit over the top for my taste. I say this because the natural taste of the coffee is drowned out almost completely by the artificial flavoring. This is something that I dislike.

It really is a shame too. I’ve had plenty of vanilla or even cinnamon flavored coffees that were well-balanced and tasted very natural. This one, was neither. Still, I’ve definitely taste worse coffees. And this one might make a great latte or iced brew. But I can’t really recommend it as a day-to-day drink.

Would buy again?: No. This is one that just doesn’t tickle my fancy. It’s not the worst coffee I’ve ever had. But it’s not particularly good either.