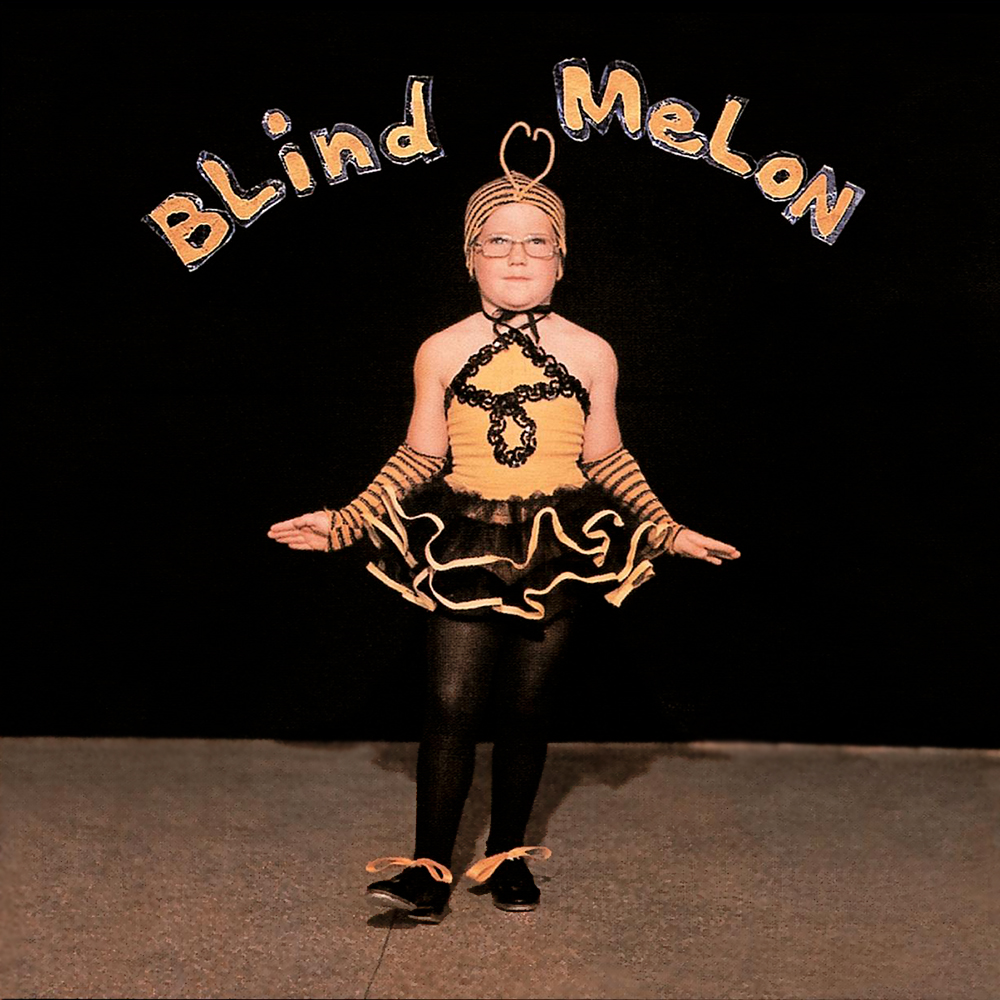 Today I’m going to discuss one of my favorite rock albums of all time, Blind Melon. If you’ve been following my Record Shop posts over the years, you might be surprised to learn that I hold this record in such high regard. And I do – seriously. In fact, calling this one of my favorite albums is probably an understatement. I know that it is vastly different than any of the other records that I’ve discussed before. But my musical tastes are pretty diverse. And this record is a testament to that.

In the minds of many, Blind Melon was a one-hit-wonder. Almost anyone you come across on the street can sing along with their hit single “No Rain”. But you’d be hard-pressed to find a random person that could even name any of their other songs. This is a shame because over the course of their short career, Blind Melon made some really amazing music. Interestingly enough, “No Rain” is a terrible example of what Blind Melon was all about. Trying to describe their sound to someone who is unfamiliar with the band is difficult. Even though Blind Melon hit the scene at the height of the Alternative Rock era, their music has roots in 70’s southern rock. Their debut album is very much a “pure rock” album. But it is one with a twang all its own. Not only that, but the record is VERY well produced. In an age when DYI lo-fi recordings were becoming somewhat acceptable, Blind Melon gave us a crisp, polished sound that (in my opinion) is unmatched to this very day.

No discussion of Blind Melon is complete without mentioning their lead singer, Shannon Hood. Like Kurt Cobain, Shannon Hoon will be forever known as an artist who passed away long before their time. His voice is often described as high-pitched and scratchy. But to anyone who actually takes the time to listen, it’s obvious just how talented he really was. Unlike so many of this grunge-era peers, Shannon could actually sing, often time hitting notes that are simply unobtainable to most. His voice, combined with the extreme talent of his band members, makes Blind Melon one of the all time favorite rock groups. And this album is the perfect example of what they had to offer with music world. If Nirvana is the band that made want to learn how to play the guitar, Blind Melon is band that made me want to master the instrument.

I realize that’s a pretty bold statement. So, perhaps it’s best that I get right into my track-by-track breakdown so I can explain where I’m coming from.

1: Soak the Sin –  The record starts out with an amazing southern-fried style intro that immediately sets the tone for the entire album. This introduction lasts for about ten seconds, pauses, and then the song immediately kicks into high gear. “Soak the Sin” is a very much a riff-driven song. But it’s filled with a layered complexity that almost non-existent today. I like everything about this track and it does a great job of setting up the listeners expectation for the remainder of the album.

2: Tones of Home – This song was actually the first single off the record, but one that few people remember. Which is a shame, because this song is a masterpiece. In many ways, the overall feel of this song is reminiscent of “Soak the Sin”. It has the same southern-rock vibe to it but with a little burst of extra energy. The guitar solo in the middle of the track is pure bliss. Amazing.

3: I Wonder – This is a contender for my favorite Blind Melon song. For this third song, the band dials things back a notch. The song starts off with only an acoustic guitar and Shannon’s melancholy vocals. But it isn’t long until the rest of the band joins in – the end result is a trippy sonic dreamscape of sound that I am at a loss to describe. Truly an iconic song. One that needs to be heard to be appreciated.

4: Paper Scratcher –  This track rolls things back to the beginning of the album. It finds the band back in their now-familiar southern-rock inspired sound. It’s another solid track and another favorite of mine.

5: Dear Ol’ Dad – By now it’s becoming apparent just what Blind Melon is all about. This song is another example of the band’s signature sound, yet it manages to still feel fresh.

6: Change – This track is another favorite of mine and possibly my very favorite song from the band. This track brings back the acoustic guitar and the contemplative vocals. It’s mellow, thoughtful groove that features some really amazing slide guitar licks. Great stuff!

7: No Rain – Here’s the song that everyone knows. Often described as “hippie rock”, this track is a mellow, poppy romp. It’s catchy and agreeable to just about any listener. I too, enjoy this song. But I also make the bold claim that it’s probably one of the more forgettable songs on the album.

8: Deserted – This track starts the second half of the record. And while it resembles some of the earlier tunes on the album, it also has a somewhat unique feel to it that’s a bit hard to pin down. It’s not a favorite of mine, but it’s still a pretty solid jam.

9: Sleepyhouse – This track is a dreamy, relaxing tune that never ceases to capture my imagination. The song was essentially the soundtrack to the summer leading up to my freshman year of high school. Any time I listen to it, I’m immediately taken back to those slow, sleepy days. It’s truly a magical tune.

10: Holyman – Another groovy, southern-rock style tune. What else can I say at this point? Great stuff!

11: Seed To A Tree – A riff-driven tune with some rather tongue-in-cheek lyrics. A decent song, but not one of the best.

12: Drive – This song has the same vibe as “Sleepyhouse” for me. It’s a masterful track with a powerful spark of nostalgia. At times, portions of this song reminds me of Hendrix (and that’s never a bad thing). Even for the first-time listening, there’s just something about this song that makes you remember a simpler time.

13: Time – The last track on the album starts with a catchy little riff that soon breaks out into the band’s signature style. This goes on for a bit before finally fading out into a mellow drone that ends the entire experience. It’s a powerful finisher to the album and one that’s always left me yearning for more.

I realize that much of my review of this album seems somewhat biased. But that’s only because this record really is THAT good. I seriously feel like this is one of the greatest rock albums of the 90’s. But sadly, it’s a record that’s often overlooked. With all this in mind, I would urge you not to sleep on this album. Get a copy of the record, a good pair of headphones, close your eyes and just go along for the ride. I’m not a drug guy, but if you’re a stoner – this is probably the record you didn’t know you needed.

When listening to albums, I always suggest enjoying them on a nice Hi-Fi stereo system, or on a portable device with a good pair of headphones. When listening to classic records like this, I usually prefer the original release to many of the “remastered” editions. Often times, remasters are overly loud and actually contain a lower level of quality than the original album. Surprisingly, the 2013 remaster of this record doesn’t really suffer from this issue. It is a tad louder than the original, but there’s still plenty of spatial headroom. Still, I tend to prefer the original release.

When listening to a record, always listen from start to finish. Unlike pop albums, many good rock records are sequenced in a certain order. Some songs tend to be more enjoyable when following the song preceding them. That’s not particularly true with this album, but that’s still my general practice. To me, this album is best enjoyed while engaging in some other activity. Put the record on while you’re driving, or doing house work. Let it play in the background. Listen it to a few times. As I’ve said many times before, some records need to grow on you. This is a fine example of one of those records. The first time I listened to it, I wasn’t impressed. But today, it’s one of my all time favorite albums. I urge everyone to give this album a fair chance. If it doesn’t strike a chord with you at first, give it a few more listens, your opinion may change. No matter what you think about this particular album, it’s certainly not boring.