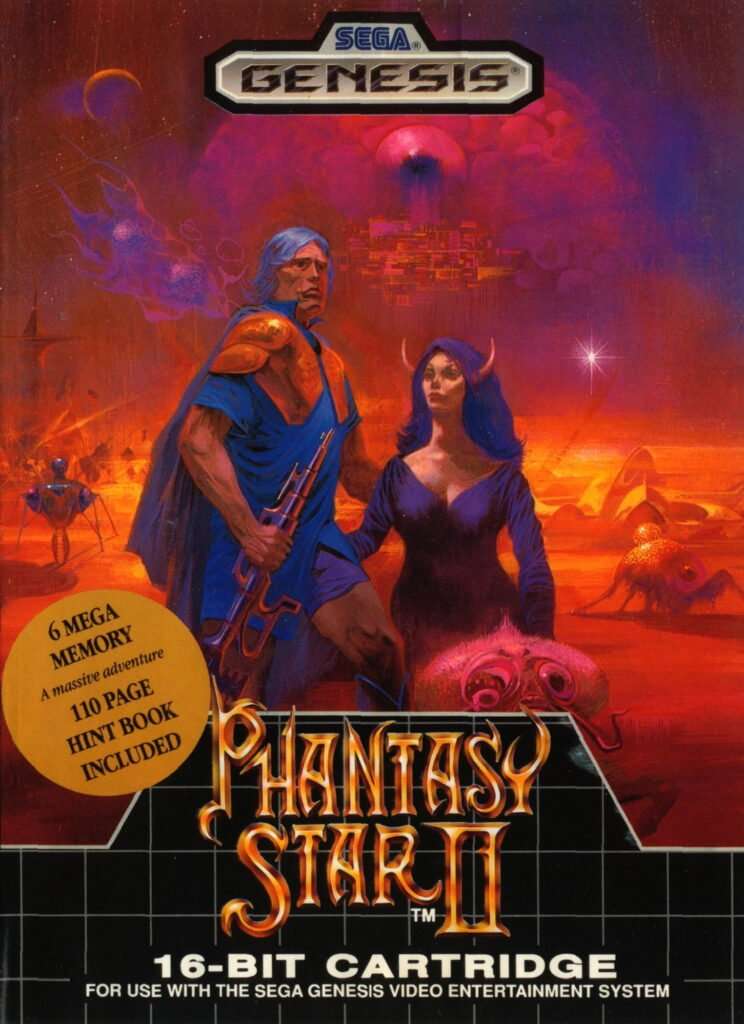 It’s hard to believe that it’s been almost three years since I reviewed the original Phantasy Star. Right around the time for that review, the game was re-released under the Sega Ages banner for the Nintendo Switch. This re-release featured an enhanced version of the original game with a few quality-of-life updates included. I was quite impressed with the treatment Sega gave Phantasy Star with that re-release. Since that time I’ve been patiently waiting to see if Sega was going to give the same love to the remaining games in the series. But, as of the time of this writing, it doesn’t seem like that’s going to be the case. Still, updated version or not, Phantasy Star II is a game I knew that I wanted to experience.

Originally released on the Sega Genesis, Phantasy Star II has a reputation for being an absolutely fantastic RPG. Of course, these days not many people still have an old Genesis console laying around. If you happen to have a Gameboy Advance, the Phantasy Star Collection is a viable option. But, these days even GBA’s are getting somewhat hard to find. Thankfully, there’s a much simpler way to play this game; the Sega Genesis Classics collection. This compilation is available on PC (Steam), Xbox One, Playstation 4, and even the Nintendo Switch.  Aside from Phantasy Star II, this collection contains over fifty classic Sega titles all for around $30.00. Needless to say, this is an amazing deal. The collection is identical regardless of the platform you choose. However, it is worth noting that the Steam version does contain Steam Workshop compatibility. This is a valuable feature because it enables players to install mods and custom patches to a number of these classic games. For example, there’s a slew of helpful mods available for Phantasy Star II alone. These can range from simple translation corrections all the way to complete game rebalances. For my review, I played the Sega Genesis Classics version of the game on Steam with the Phantasy Star II Improvement workshop content enabled. This mod provides several QOL updates such as an improved English translation, faster walking speed, and some balancing tweaks. In my opinion this makes the experience on par with the Sega Ages version of the first Phantasy Star. 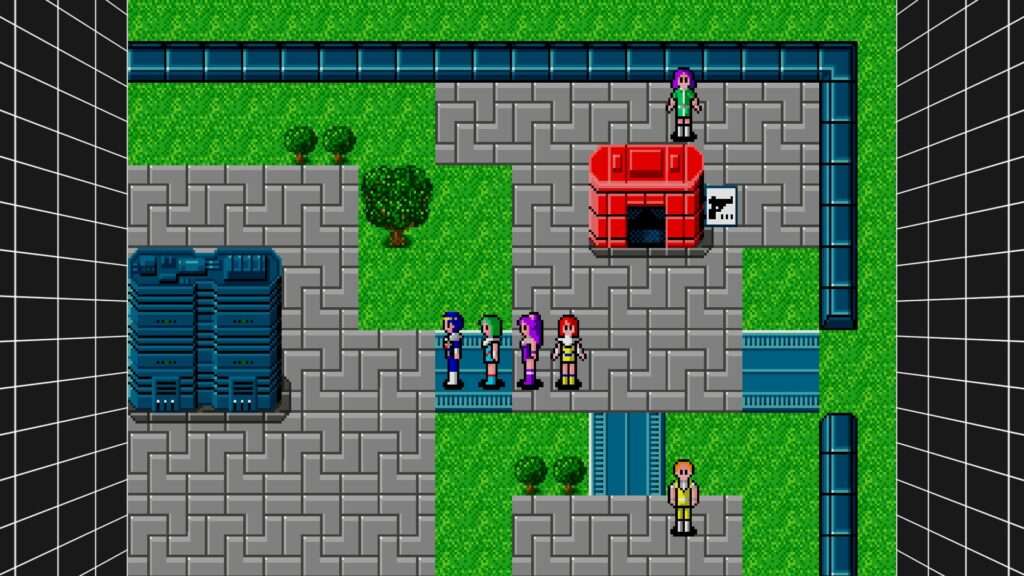 Phantasy Star II is a direct sequel to the original game. The story takes place nearly a thousand years after the events of the first Phantasy Star. Since that time, the world has been terraformed and the planetary climate and biology is now controlled by a powerful A.I. known as Mother Brain. This system has worked flawlessly for hundreds of years. However, things have started to go awry. A large portion of the planet’s water supply has suddenly dried up and strange creatures have began appearing in the wilderness. To diagnose the problem, the government has sent a special agent, Rolf, to retrieve a diagnostic device from a top-secret Biosystems Lab. It is hoped that a solution to the problem can be found by using the data retrieved from the lab. On his journey, Rolf encounters a number of potential allies. Together, they slowly uncover the mystery behind Mother Brain’s sudden dysfunctional behavior. The true answer is a danger almost beyond comprehension – one that harkens back to events that occurred almost one thousand years ago…

For the most part, the gameplay of Phantasy Star II is very similar to that of the first game. It starts with players controlling a single hero. However, it isn’t long until a second character joins the party.  Each time the player discovers a new town on the world map, a new playable character is unlocked (there’s a total of eight in the game). These characters can then be added to the existing party (with a maximum of four party members). Like most RPGs of the era, the game is presented in an overhead format with random battles and turn-based combat. The biggest difference between this game and the first Phantasy Star is the elimination of first-person dungeons. Everything about Phantasy Star II (except the combat and some NPC encounters) is completely presented in an overhead view.

At first, I was saddened to see the removal of the first-person grid-based dungeons. Old school dungeon crawls are a passion of mine. But, I do understand why the decision was made. For the sake of consistency, it only makes sense to keep the presentation of the game static. Plus, at the time this game was released, grid-based dungeons were becoming an old concept of the past.

Like most RPGS, combat is turn-based. Specific commands can be given to each party member individually. But oddly enough, players are unable to decide which monsters are targeted. I found this to be a puzzling choice as strategy is usually a very big part of RPG combat. 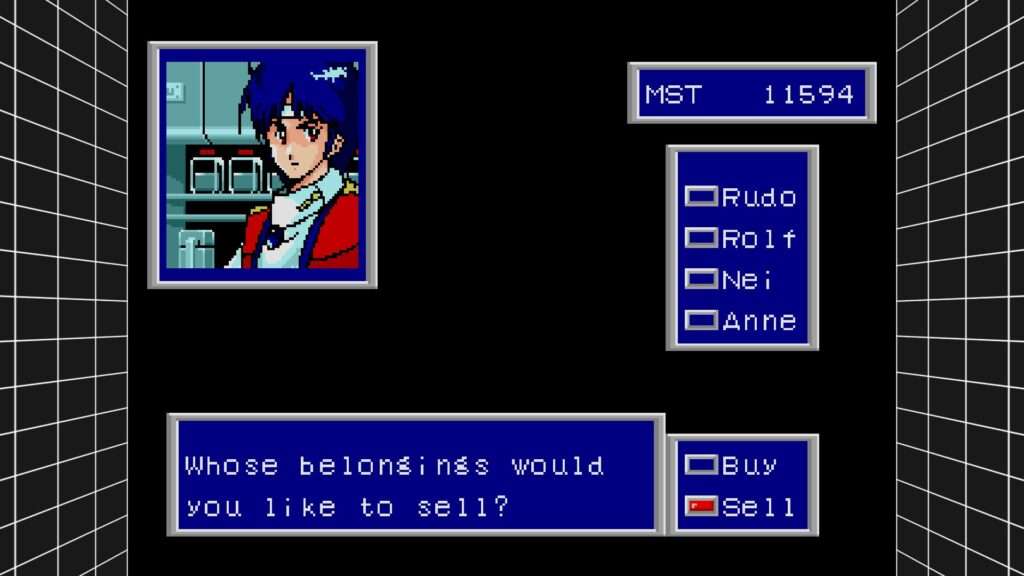 In terms of aesthetics, Phantasy Star II meets the benchmark of a late 80’s/early 90’s RPG. Being a 16-bit title, the game is colorful and presented in a slick anime style. Nearly all of the fantasy elements from the first game are gone, leaving a strictly sci-fi look and feel.

But artwork aside, the best thing about Phantasy Star II is the story. The tale told in this game is nothing short of amazing. In fact, it completely blows the first game out of the water. Even though it’s not apparent at first, the storyline of the two games are very much entwined. If you’re a player who is familiar with the events of the first game, you’re going to get a bit more out of this one than someone who isn’t. Still, the game is easily accessible for a new player.

By today’s standards, Phantasy Star II is a very old style RPG. It’s grindy at times and can be pretty punishing (especially in the early stages). Still, for players who enjoy that type of thing, it’s still quite a treat to play. This was my first foray with the game and I absolutely loved it. If Sega ever sees fit to revisit this title in the future, I look forward to the opportunity to play it again. 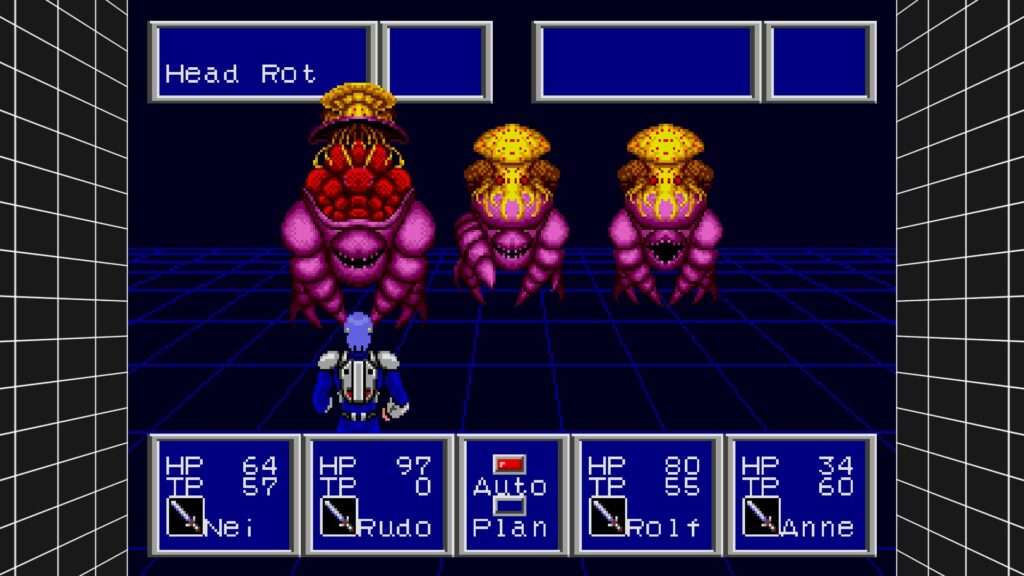 Difficulty: Hard –  In my opinion, this game is a just a tad harder than the first Phantasy Star game. The biggest source of the difficulty here is the inability to target specific enemies during combat. Also, the difficulty ramp is pretty extreme in some parts of the game. Naturally, patient players are able to grind past most of the difficulty fairly easily. But the overall experience here does seem to be a bit more brutal than necessary.

Story: This time around a lot of thought went into the backstory. A lot of interesting concepts regarding A.I. and morality are explored in this game. This is done in a pretty shocking and deep way. The story starts off strong and continues to unfold as you progress through the game. Eventually, many loose ends from the first game are also brought into play.

Originality: Even with the unique sci-fi environment, there’s really nothing in this game that hasn’t been seen before. Still, the excellent depth of the in-game story on top of a number of refined concepts does keep this game feeling fresh and unique.

Soundtrack: This game features some really catchy and memorable tunes. My only complaint is that they do tend to get a little repetitive at times. Still, there’s plenty of groovy toe-tappers tucked away in the soundtrack.

Fun: As a fan of RPGs, I found this game to be very enjoyable. The characters are unique, the story is top-notch, and the visuals are compelling. It is a bit dated and that’s likely to be a turn off for some. But for gamers who enjoy this type of thing, there’s lots of enjoyment to be found here.

Graphics: Phantasy Star II is a good example of early 16-bit art. It’s colorful and pretty to look at. But, not as refined as later games of the era. Still, the anime-style presentation is fairly well done. Overall, I have no complaints.

Playcontrol: Fair warning here – I’ve never played this game on its native hardware. So I have no idea how it may feel with a SEGA controller in your hand. I played using both an Xbox One and Switch Pro controller on my PC and encountered no issues whatsoever. The game controls were responsive and accurate no matter what hardware I used. Standard RPG fare here.

Value: Your best bet for playing this game is by getting a copy of the Sega Genesis Classics collection. This collections sells at full price for $30 but can often be found on sale for considerably less. For this price you not only get Phantasy Star II, but a slew of other classic Sega titles. If you’re looking for a copy of the original Genesis release, be prepared to pay over $50.00 for a used copy.

Overall score (1-100): 85 – This game is a fine example of an early 90’s console RPG. It’s unique enough to stand apart from other games of the era, while still being familiar enough to enjoy without a steep learning curve. It takes nearly everything good about the original game and improves on it. It’s not perfect by any means, but it’s a stellar example the classic RPG experience.