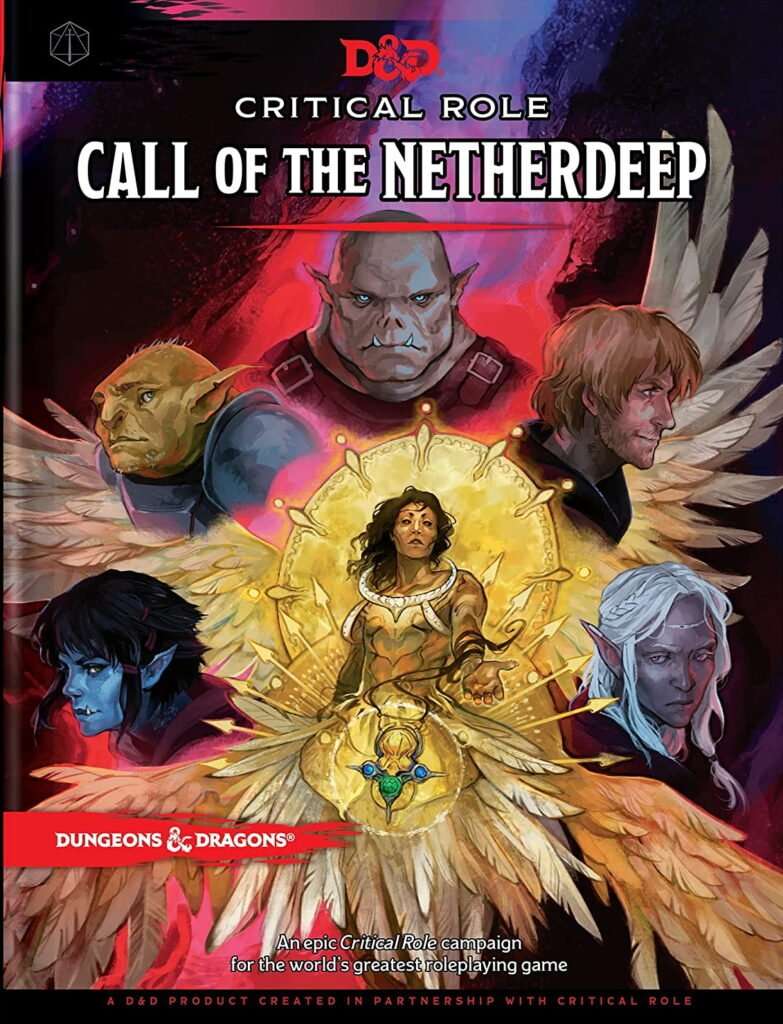 I’ve said it before and I’ll say it again, Critical Role has become a big deal for D&D. To date, we’ve seen the publication of one official and two unofficial Critical Role campaign books for fifth edition. This is no small accomplishment! The Explorer’s Guide to Wildemount brought the world of Critical Role into the official D&D cannon – something that homebrew DM’s all over the world can only dream of. Well, it seems that WotC is not finished bestowing blessings upon Matt Mercer. With the release of this latest book; Call of the Netherdeep, we now have the first official adventure module set in the world of Exandria.

One thing that I like about this book, it the fact that it is an adventure – plain and simple. There’s no player backgrounds or optional races contained between the covers. This is something that I appreciate. All too often, adventure books will contain extra tidbits to try to entice players into buying them. The motive in this tactic is nothing but pure profit. While I enjoy player options just as much as anyone else, I think they are best left for supplement books. I know many will disagree with me on this, but that’s simply my outlook. So, in the case of this release, I appreciate the straightforward nature of the product. If you want those other things, they can be found in The Explorer’s Guide to Wildemount. In this way, these two products compliment each other.

The adventure in this book is designed to take players from level 3-12 – that’s quite a range! The story in this book can be viewed as a continuation of the starter adventure found in The Explorer’s Guide to Wildemount. But it’s entirely possible for the DM to start characters off at 3rd level if they choose. The adventure is broken down into seven chapters and features a comprehensive look at the world of Exandria. In this way, the adventure does a fantastic job of giving players a taste of everything the campaign setting has to offer.

Over the course of the game, the players are occasionally pitted against a rival party. This other group is undergoing the same quest. So by the end of the adventure, it very much becomes a race to see who comes out on top. I find this to be a fairly interesting concept. It has to potential to really enhance the story and create tension and urgency when needed. But, on the other hand, if managed poorly by the DM it can also be a major buzzkill for players.

As far as adventures go, there’s a little bit of everything here. Plenty of open exploration, great NPCs, options for roleplaying, and even a healthy dose of old-fashioned dungeon crawling. The biggest drawback for most is going to be the setting. The adventure itself is very much tied to the world of Exandria. It’s certainly possible for DMs to try to adapt the adventure to other worlds, but doing so will take a lot of work. People love to listen and watch the Critical Role podcast, and there’s a huge fanbase for the world and characters. But personally, I don’t know many people who play a Critical Role campaign at home. But who knows, maybe this is going to change that.

Despite being a very niche product, I welcome releases like this. It’s the perfect mix of classic and new D&D. Releases like this make me excited to see what’s coming next. Am I likely to run this module at my table? Probably not. But it’s still a solid release and it’s filled with lots of great ideas.