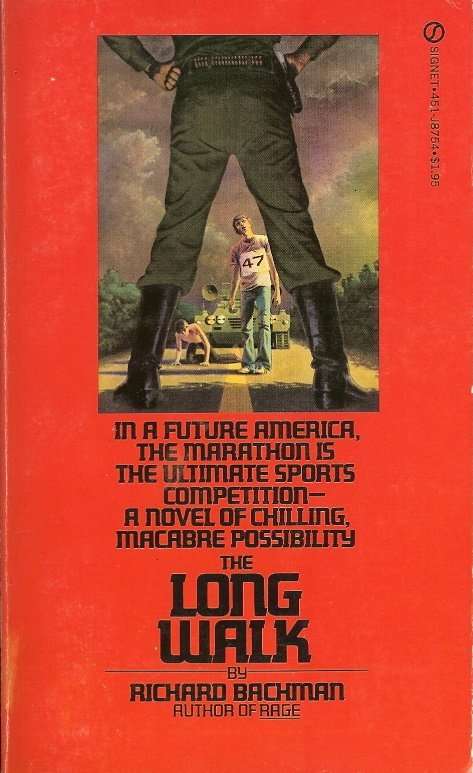 What can I say? After my recent read of The Stand, I found myself completely hooked on Stephen King. Even though I had several other books on my list of things to read, I couldn’t resist the urge to dive into another one of King’s novels. So, continuing my practice of reading things by date of publication, I decided to move on to a book called The Long Walk. This book, like Rage, was originally published under the pseudonym of Richard Bachman. However, don’t be mistaken, this book is very much a Stephen King masterpiece.

The premise behind this book is very simple, it takes place in a futuristic, dystopian America.  Well… sort of. This statement would have been true at the time this book was published. But, for someone reading this book today, much of technology and culture in The Long Walk is somewhat antiquated by today’s standards. So perhaps we should say that this book takes place in an alternate version of America. An America of the mid-1980’s where the country is ruled by a military dictator.

The book focuses on The Long Walk; an annual event where young men walk a predetermined marathon without rest. The walkers are required to keep a certain pace. If they fall below that pace, they are given a warning. Warnings expire after a time, but if a walker collects more than three warnings they are shot and killed. This continues until only one walker remains. The final walker receives a large amount of prize money and a special reward of their choosing.

The story itself focuses on one walker in particular, Ray Garraty. Almost the entire novel centers around the Ray’s thoughts and experiences during the walk; his interactions and conversations with other walkers, his private thoughts and fears, things that he observes, etc. On the surface, this doesn’t sound particularly interesting. I mean, who wants to read an entire novel that consists of a bunch of kids walking down a road? But trust me, this story hooks you early on and keeps you engaged. Once I started reading, I couldn’t put this book down. And that’s saying something, because I’ve probably read this book three or four times since I was a teenager myself. It’s just that good.

The concept of having a blood sport in a semi-modern America is almost inconceivable. I think that’s what makes this book so intriguing. The brutality and callousness in which almost every character meets their fate is mind boggling. This shock factor makes the reader wonder what happened in history to bring about such a ruthless culture. What happened to America that so many of us know and love? This book provides little to no answers to these questions. But in some ways that actually makes it a more interesting read.

Story: Thought provoking and chilling. The whole concept of The Long Walk seems so barbaric, yet also intriguing. Despite taking place in a such a restrictive environment, the story here is masterfully told. Excellent characters.