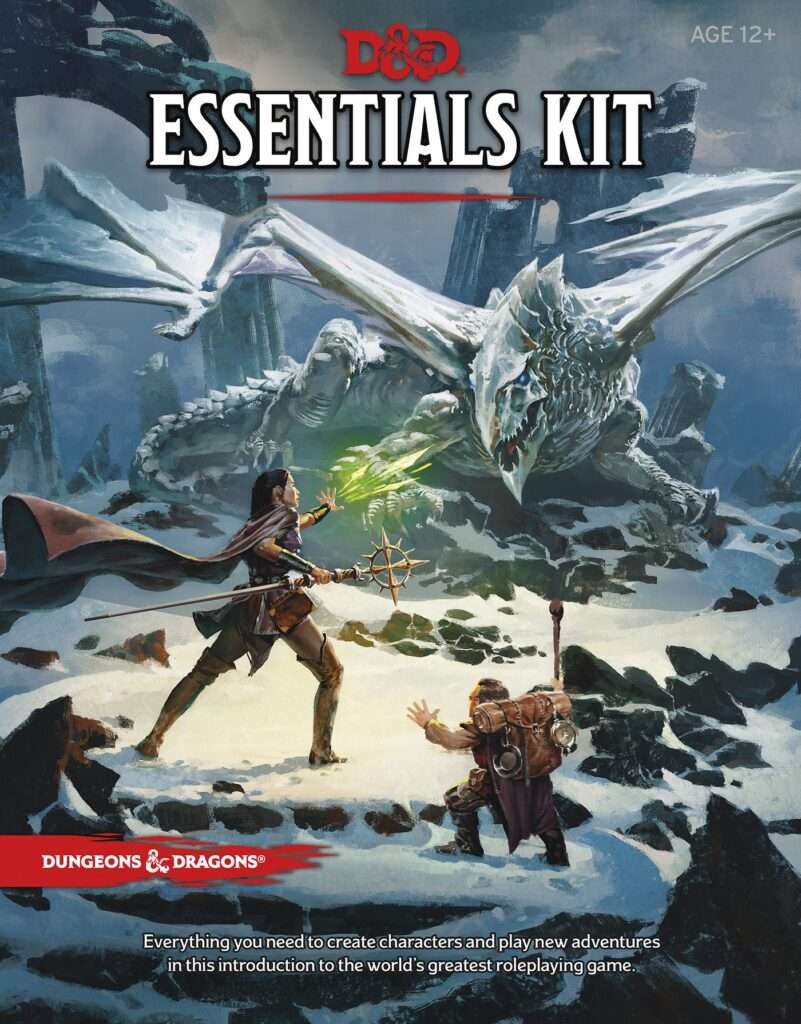 Having recently reviewed the two alternative starter sets for fifth edition D&D, I wanted to also take a moment to discuss another similar product; the D&D Essentials Kit. Now, I’ll be the first to address to elephant in the room. Do we really need another “starter” set for D&D? The original Starter Set was excellent. I understand that the Stranger Things and Rick and Morty sets could be looked at as niche products. So with that in mind, I understand why they exist. But is the Essentials Kit really necessary? Let’s find out!

In many ways, the Essentials Kit is both a companion to the original Starter Set and also a replacement for it. It’s similar, yet also very different. To explain what I mean, let’s first take a look at what’s included in this box.

The rulebook included with this set is actually a bit nicer than the one that’s packaged with the Starter Set. The book itself is of a slightly higher quality and it comes with rules for character creation. (Something that was absent from the previous set).

The adventure included is called Dragon of Icespire Peak. It takes place in the same general area as Lost Mine of Phandelver (the Starter Set adventure). In this way it can easily tie-in to a campaign launched from the original Starter Set. But doing so might require some adjustment. This adventure is designed for one to five characters and can potentially take the party from first to sixth level. That’s pretty impressive for an entry level module! The way this adventure accomplishes this is through a series of drop-in quests. In this way, Dragon of Icespire Peak is very different that Phandelver. This adventure is not very linear and plays much more loosely than I’d expect from a “starter” module. Still, it’s a good representation of a popular playstyle. Rookie DMs who are able to run both Phandelver and Icespire, will have a pretty solid foundation that will serve them well for more advanced products.

The DM screen and adventure supplements are also a nice touch, but largely unnecessary. They tie-in almost exclusively to the included adventure. So it’s unlikely that they’ll have much value when playing anything other than the included story.

The dice set is basic, but very nice. It’s a full poly set with three six-sided dice. This makes it perfect for character creation. Its inclusion is expected, but the extra D6’s are a nice touch.

As you can see the contents of this box are comparable to what is included with the Starter Set, but also just different enough to stand on its own. This would lead one to ask; which set is best for me? Well, in my opinion, I would answer as such:

The Essentials Kit is probably the best of the two in terms of value. This is especially true for players. With it, you get a nice set of dice, blank character sheets, and a solid rulebook. It’s everything you need to play the game.

The same can be said for DMs. However, it is worth noting that the Starter Set includes an arguably better adventure.

Still, I’d take these suggestions with a grain of salt. In the very near future, WotC is going to be releasing a brand new Starter Set that’s intended to replace both the original set and the Essentials Kit. Of course, time will tell how successful this release will be.

This month will see the publication of a new D&D product, Monsters of the Multiverse. In a way, this product is the first in what many are considering to be a revamp to fifth edition D&D. This statement is supported by the upcoming release of the new Starter Set as well as revised versions for the PHB, DMG and MM coming in 2024. So, with this in mind, we will see what the future holds!