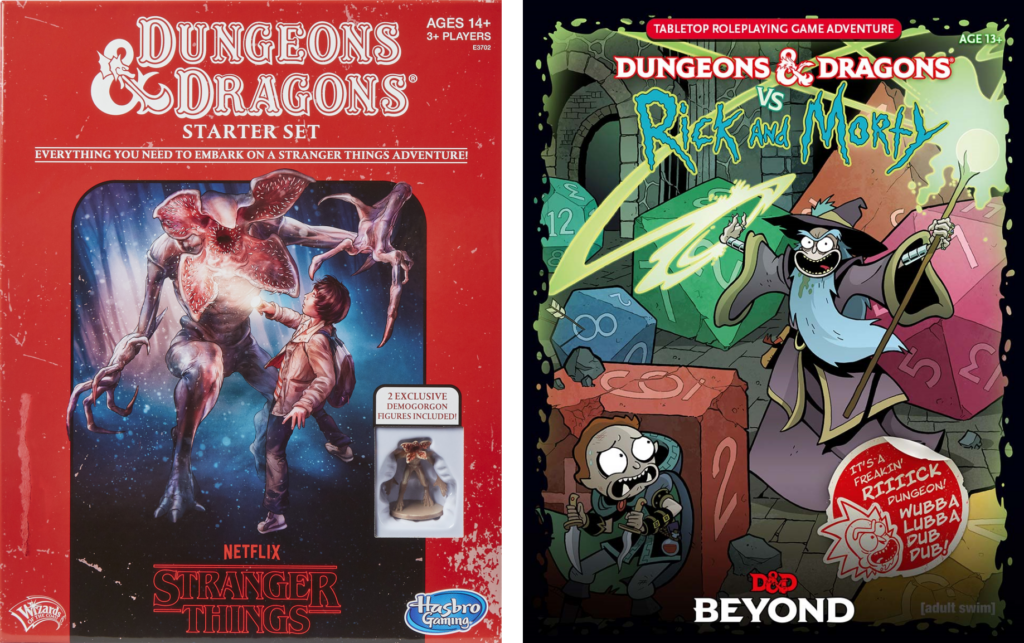 This is a post that I’ve put off writing for quite some time. I guess the reason for the delay was because I really didn’t know just what to make of these two products. They are definitely the black sheep of Fifth Edition D&D. But, there’s some pretty major changes coming to D&D in the very near future. (Some are even calling it Dungeons & Dragons 5.5.) So, I really wanted to take this opportunity to tie up loose ends and discuss both the D&D Starter Set – Stranger Things Edition and Dungeons & Dragons vs Rick and Morty.

Let’s start with the Stranger Things set. If you’ve watched the Netflix original series, Stranger Things, than you know that old school D&D references are scattered throughout the first season of the show. This boxed set attempts to introduce fans of the series to D&D proper. The box includes is a basic rulebook, adventure (modeled after the one played in the show), a set of dice, and two miniatures. Honestly speaking, the rulebook is very well done. In fact, it’s probably better than what’s included in the standard Starter Set. The adventure on the other hand, leaves a lot to be desired. For starters, it’s extremely short. That adventure is a brief dungeon crawl designed to take players from 3rd to 4th level. It’s a fairly solid adventure in itself, but I don’t feel like you get much bang for your buck.

Personally, I can’t find any real reason to recommend this set over the standard 5E Starter Set. I guess if your goal is to try to convert a bunch of Stranger Things fans, maybe this will do the trick. But I think there’s better options out there.

Next up is an even stranger product; Dungeons & Dragons vs Rick and Morty. Now, I will state right up front, I’m not a Rick and Morty fan. Not because I dislike the show, but because I’ve never watched it. So, I’m completely impartial. But still, I know enough about it to understand that it doesn’t seem like a good D&D crossover. This boxed set contains a D&D rulebook (presented in a rather obnoxious style), an adventure book, and themed DM screen, and a set of dice. As was the case with the Stranger Things set, the adventure is little more than a mindless dungeon crawl. But it’s filled with silly and zany references that are likely only to be appreciated by fans of the show. Still, it’s admittedly pretty solid in its presentation. The rulebook on the other hand is overly busy-looking. It is filled with distracting side notes and art. If I’m being blunt, it’s a mess. Sadly, the best thing about this box is the 11-piece polyhedral dice set.

I’m not really sure what the end goal with these two products were. I don’t have a problem with crossovers or specialty branded D&D adventures. But maybe there’s a better way to go about it. Perhaps WotC should consider making a boxed set that includes just a high quality rulebook, dice, and a few other freebies. Then, allow customers to download starter adventures for free. These downloads can be vanilla modules, or even Stranger Things and Rick and Morty themed romps. But packaging such niche adventures in a “starter” set doesn’t seem to make a lot of sense.

I wish I had more nice things to say about these products – heck, I wish I just had more to say about them. But in truth, there’s really not much here that requires a deep dive. These are two D&D releases that I can easily do without.