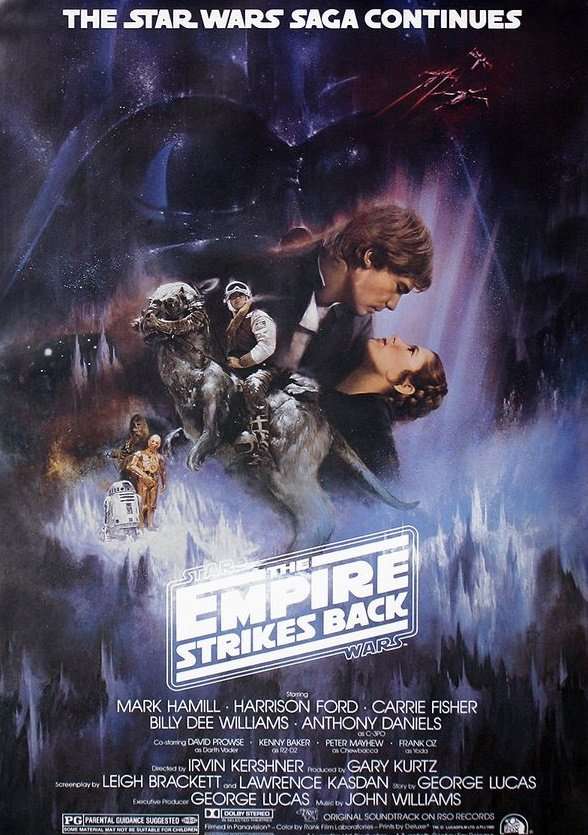 Several months ago I made a post where I discussed Star Wars: A New Hope. I talked about my personal history with the film and how much it influenced me growing up. All of the things I mentioned in that post were true. But I’d be amiss if I were to claim that A New Hope was the only film to spark my young imagination. You see, I experienced A New Hope for the very first time by watching it on cable – I remember that very vividly. But sometime, not long after, I also saw the next chapter in the Star Wars saga; The Empire Strikes Back. But here’s the thing. I can’t remember exactly how or where I first encountered this movie. More than likely it was a VHS rental, I don’t can’t say that for sure. What I do know is that for almost as long as I’ve been a Star Wars fan, The Empire Strikes Back has been a part of my memory.

When I was a kid I collected Star Wars toys. I remember having all of the classic action figures. Then, out of nowhere, there was a whole new lineup to match up with the events in The Empire Strikes Back – Luke and Han in arctic gear, Princess Leia in a luxurious dinner gown, there was even the “take-apart C3PO” figure – a version of C3PO that you could disassemble so that you could re-enact the scene in Empire where he gets blown to bits. And then of course, there was Lando and Yoda, the two newest characters in the Star Wars saga.

Lando was an amazing addition to our band of heroes. Here we have a new character with ties to a fan favorite, Han Solo. But, like so many other things in Star Wars, their history is a bit murky. Apparently they are old friends with a tumultuous history. But those details, while hinted at, were never clearly explained. (At least they weren’t until nearly forty years later, but’s another story altogether.)

Lando is great. But, I think of all the new characters introduced in Empire, Yoda is the one that stuck with me the most. In this movie, Luke goes out into the galaxy in search of a legendary Jedi master. As a first time viewer, you’re expecting some great warrior or perhaps even an older gentleman like Obi-Wan. But Yoda turns out to be a little goblin-looking nuisance. Looking back, it was an absolutely brilliant move. And the first of several twists that this movie had in store.

I guess it is no surprise that Yoda resonated with me as much as he did. One of my favorite parts of the original Star Wars movie was the cantina scene. All of the strange alien creatures fascinated me to no end. Of all the action figures that came from Empire, it was the aliens (like Yoda) that captured my imagination the most. I remember laying on my bedroom floor staring at my Zuckuss (a bug-like bounty hunter) figure for hours, wishing I knew more about the character. But of course, he only appeared in the film for a few seconds. At this time, there were no Star Wars books to provide details. Everything was left to the viewer’s imagination.  All of this was part of the magic that made these movies so special.

I suppose that no discussion of The Empire Strikes Back would be complete without acknowledging the infamous “I am your father” scene. Now, while I don’t have particular memories about the first time I saw this movie per se, I do recall my reaction to the revelation that Darth Vader was Luke Skywalker’s father. I didn’t believe it. It was that simple. I was certain that Vader was lying. After all, he’s the biggest bad guy in the galaxy. I remember having discussions with my friends and family about the topic. Everyone seemed content to take Vader’s claim at face value. But I was absolutely certain it was a trick. Of course, a couple years later when Return of the Jedi came out, I was proven wrong. But still, it was a powerful moment and an absolutely masterful example of storytelling.

For me, Empire Strikes Back was just part of “Star Wars“. It was truly a continuation of an existing story. My child mind was never really able to look at it any other way. I sort of wish I had been a little older when it came out so that I could have a more defined memory about the excitement leading up with the very first Star Wars sequel. But it is what it is. This is Star Wars, only a little better. This movie takes all of the elements that made the first Star Wars film great and cranks it up to the next level. The chemistry between our lead characters becomes a little more refined and their bonds are strengthened. We are introduced to new characters, new worlds, and new insights into the motives behind the galaxy’s most feared bad guy. The film ends the way and good mid-trilogy movie should, with an uncertain future and somewhat somber note. Yet, there’s light on the horizon… It’s perfect. It’s truly a work of art.

I know that looking back on this film today, it’s somewhat difficult to understand why so many fans hold this movie in such high regard. Stars Wars today is somewhat mundane. Everyone has seen it and everyone knows the story. But keep in mind, in the early 80’s, this was a story that was still unfolding. Nobody knew what to expect. The revelation of Vader being Luke’s father was actually a legitimate surprise. Creatures like Yoda had never been seen on film before. So much of what this film introduced was groundbreaking and new. It was all so fresh and inspiring and we couldn’t wait for more.

If you’re reading this and somehow you’ve never seen this film, you owe it to yourself to watch it as soon as possible. As was the case with A New Hope, I’ve found that the best way to enjoy this movie is through the 4K physical release. This version of the film is absolutely gorgeous and looks astonishing in 4K definition. Also, this version quietly corrects a few formatting and color-related issues that crept into the film during previous re-releases. Without a doubt, the 4K cut is the definitive version of The Empire Strikes Back.