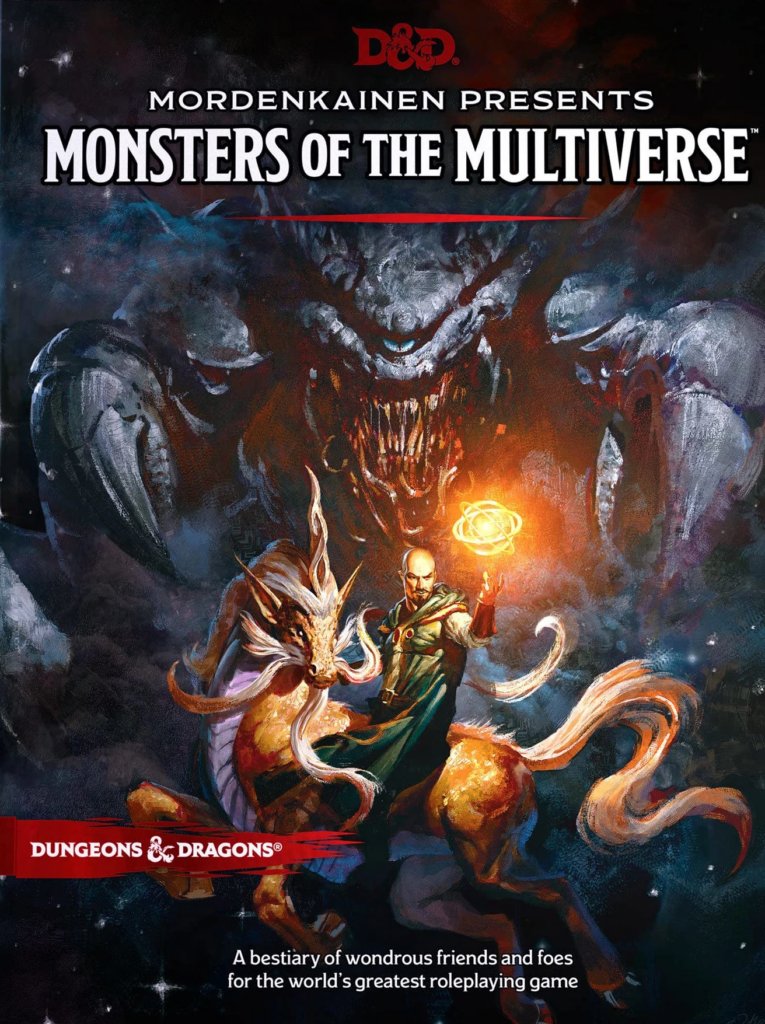 For some time now I’ve been mentioning the upcoming “refresh” of Fifth Edition D&D. While the actual revamp of the core rulebooks is still a ways off, the first product in this new line of thinking is finally here; Monsters of the Multiverse!

In reality, this book has been available for a while now as part of the Rules Expansion Giftset (a collection that also includes Xanathar’s Guide of Everything and Tasha’s Cauldron of Everything). But for players like myself, who already own these other books, it’s hard to justify spending $170.00 just to gain a single new release and some fancy-looking cover art. So I, like many others, decided to wait a few months for the solo printing. Well, May 16th arrived and I finally got my hands on the individual pressing of this book. I’ve spent the last month giving it a serious look and I’m ready to share my thoughts.

Right up front, I want to take a moment to discuss what this book is and isn’t. This book is a collection of both monsters and player options. But, if you think this book is going to be filled with a bunch of new material, you’re sadly mistaken. Monsters of the Multiverse is not a tome filled with brand-spanking-new beasties. Nor is it a book filled with shiny-new player options. Instead, it is a collection of older material that was previous scattered across multiple releases. But for this release, all of this material has been reorganized and updated.

As a bestiary, the majority of what is included in this book was originally sourced from both Volo’s Guide to Monsters and Mordenkein’s Tome of Foes. It brings in all of the monsters from those books, but includes little tweaks to stats and flavor text. This release introduces only one new monster to the bestiary: the strange and seemingly pointless, Dolphin Delighter.

Aside from being just a collection of beasts, Monsters of the Multiverse also includes over thirty playable races. Again, all of these races have appeared in previous products (some popular release and some rather obscure ones). Their presentation here includes little tweaks and errata corrections. But there is one BIG change that has proven to be rather controversial: racial specific bonuses. In the past, certain races would be linked to ability score increases. For example, when the Tabaxi race was originally introduced in Volo’s Guide to Monsters, this cat-like race offered a bonus of 2 to Dexterity and 1 to Charisma. These bonuses were there to highlight the fact that the Tabaxi race has similarities with other cat-like creatures when it comes to agility and cunning. But, WotC has decided that these bonuses tend to shy certain players away from particular races. After all, if a player wanted to be a Sorceror, why would they ever choose to play as a Tabaxi? Wouldn’t a Rogue seem more suited to a race that receives bonuses to Dex and Cha? WotC’s answer to removing these bonuses is to say that every race gets a +2 and +1 to the stat of the player’s choice. It makes sense and I get where WotC is coming from with this change. But still, I’m not sure if I agree with it. Call me old school, but racial ability modifiers have been part of the game since the very beginning and they are there for a reason. The good thing is, D&D is a game with rules that were designed to be broken. As a DM, if I want racial ability modifiers at my table, that’s just the way it’s going to be.

It is important to note that not every playable race from earlier products are included in this book. Absent in this release are fan-favorites like the Owlin of Strixhaven or the Kalashtar of Eberron. There’s also a handful of other races that didn’t make the cut. But, this is forgivable due to the fact that the options that were excluded are very much campaign-specific.

Knowing that the bulk of this book comes from both Volo’s and Mordenkein’s, one might ask the question: should I get rid of my old books and replace them Monsters of the Multiverse? Well, it really depends on the person. For players, I highly recommend getting this book over the other two. The information in this book is better organized. Plus, having all these options in one compendium is very convenient. Not to mention that a few of the playable races included here come from other releases besides those two books mentioned above. However, for DMs the answer isn’t so simple. The two previous books included a ton of written lore about many of the monsters they introduced. This material was not included in Monsters of the Multiverse. This means that there is still some value in those older releases. On the other side of the token, the revisions to the monsters in the bestiary are considered to be the new standard. So, completely ignoring this release in favor of the older books is not recommended. In the end, I suspect many DMs will end up with all three on their bookshelves, despite the redundancy.

All in all, I understand why this book exists. It’s a great expansion for someone just getting into the hobby. After taking a good hard look at it, I decided that it wasn’t quite the shameless cash-grab that so many people made it out to be. But that being said, if you own the two books that make up the bulk of the material included in this release, you can probably hold off if your wallet demands it.