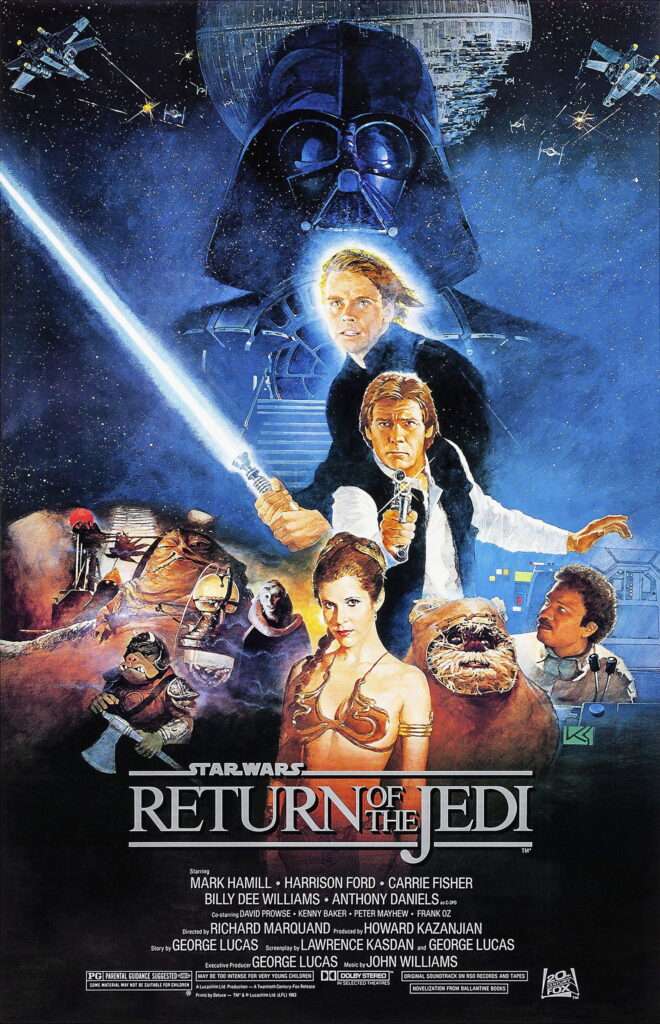 Of the three original Star Wars movies, Return of the Jedi holds a special place in my heart. I was introduced to the first two movies by either cable or home video, but Return of the Jedi was the first Star Wars movie that I saw on the big screen. I was just a few weeks shy of my fifth birthday when my father took me to a matinee screening. At the time, Star Wars was still very new to me. I had only been introduced to the first two movies just a few months prior, but enough time had passed for me to become completely obsessed with everything Star Wars. In that time I had already managed to collect quite a few Star Wars action figures and various other toys. But it wasn’t just toys. I had a Star Wars lunch box, I had pajamas, bed sheets – you name it. I was deep in the fandom. So, it goes without saying that I couldn’t wait to see how the Star Wars story was going to end. Because remember, back in 1983, there were no plans for a fourth (or, should I say, seventh) movie. Rumors of prequel films where batted back and forth among fans, but no one had any idea if such a thing would ever really see the light of day. So, as far as everyone back then was concerned, Return of the Jedi was the final chapter in the saga.

For fans at the time, Return of the Jedi was everything we had been dying to see. The infamous Jabba the Hutt, a character who had been only been mentioned in the previous films, was finally revealed on the big screen. People were taken aback by the slimy, massive space-slug. Never before had such a character been portrayed on film and it fantastic. The same could be said about the Emperor. When was the last time a character managed to portray the concept of evil with such a degree of perfection? At last, the face behind the curtain was revealed and he was everything fans had expected and more. But it doesn’t stop there. When The Empire Strikes Back ended, our heroes were split up and hurting. Darth Vader had just revealed the secret of Luke’s parentage and the future was uncertain. RotJ saw the heroes band back together. But not only that, it also saw them mature. Han and Leia finally admitted their feelings for each other. Luke was now more experienced and confident in his abilities. The storyline of this new movie helped to tie up many loose ends left by the previous films and also did a masterful job of giving a fitting ending to the whole saga.

I know that a number of film critics and Star Wars fans alike often consider The Empire Strikes Back to be the penultimate Star Wars movie. And while I agree, Empire is a cinematic masterpiece, I feel that RotJ is considerably underrated in terms of what it managed to accomplish. Not only did it put an end to the saga, but it told a great story of friendship and redemption. It manages to accomplish this amidst an epic battle that’s filled with adventure, comedy, and even tragedy. It’s a jack-of-all-trades – but one that actually also manages to be a master of them as well.

Return of the Jedi was also re-released in the late 90’s under the “Special Edition” label. As was the case with the prior films, I went with my friends to the theater to see the newly remastered release. While Empire managed to escape the re-release with minor changes, RotJ was not so fortunate. Lots of fans like to scream about the changes that were made to A New Hope in the Special Edition release. But I personally find RotJ to contain the most offensive revision. I’m talking about the elimination of “Lapti Nek“.

In the original release of RotJ, there’s a scene that takes place in Jabba’s palace. During this scene, an alien band is performing a live number that sounded a bit like a cross between funk-rock and disco. The song is called Lapti Nek, and it’s inclusion in the film was very brief. In fact, it really served as little more than background noise. But, I always grooved to it and found it to be almost as memorable as the cantina song from A New Hope. Well, the Special Edition of the film replaced this incredible song with a completely ridiculous musical number called Jedi Rocks. I can’t begin to explain my dislike for this new song. In my opinion, it seems both out of place and horribly composed. It almost feels like a parody. In short – I absolutely loathe this change. I can’t for the life of me understand what made George Lucas think this was a good idea. To me, Jedi Rocks is the worst revision to come out of the Special Edition.

There are other changes that were made to the film as well. These include some minor special effects, and a whole new montage (complete with musical score) at the end of the movie. But, these changes are mostly welcome and not particularly intrusive. The only other final bit of version-controversy involves the home release. The original ending scene shows the ghostly versions of Yoda, Obi-Wan, and Anakin (then portrayed by actor Sebastian Shaw) looking on from a distance as our heroes celebrate their victory. This remain unchanged with the Special Edition. But starting with the Blu-Ray release of the movie, Sebastian Shaw was digitally replaced with the actor Hayden Christensen (who portrayed Anakin Skywalker/Darth Vader in the prequel films). While this certainly makes sense from a continuity standpoint, the young age of Hayden Christensen doesn’t really match-up with the character at the time of his death. Again, it’s not a terrible change, but many fans felt the decision just didn’t make much sense. I agree.

Regardless of your view on the SE/Blu-Ray changes, there’s not really an alternate option when it comes to watching this movie at home. These days, most people fire up Disney+ if they want to watch RotJ. That’s fine, but as always, I still recommend physical media for the best experience. Specifically, the 4K UHD disc-version. This version of the film is absolutely gorgeous and looks astonishing in 4K definition. As was the case with the prior movies, the 4K release also quietly corrects a few formatting and color-related issues that crept into the film during previous re-releases. Without a doubt, the 4K cut is the definitive version of Return of the Jedi. It’s the best way to enjoy this movie at home. (Even if Jedi Rocks is still included).

So what are you waiting for? Grab the discs and have an original trilogy viewing party! These three movies together are still best Star Wars experience you can have.