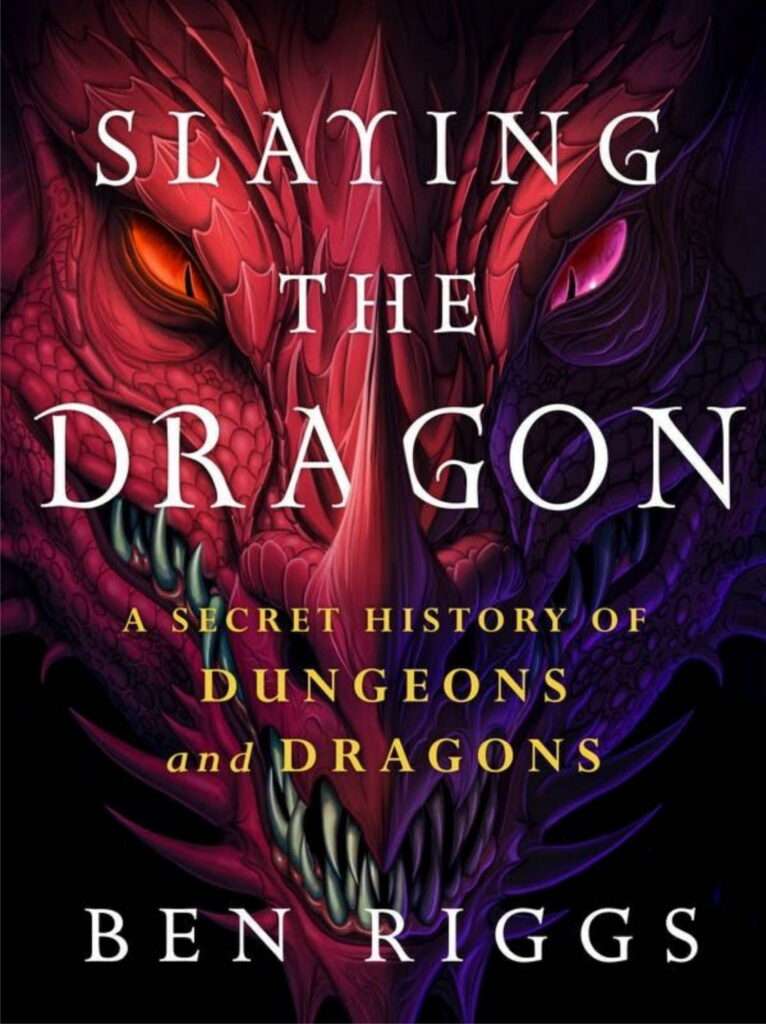 It’s very rare that I pick up a new book on release day. It’s even rarer for me to read through it in less than forty-eight hours. But that’s exactly what happened with Slaying the Dragon by Ben Riggs. Now, I will go on record and say up front, this is not a book for everyone. The subtitle reads “A Secret History of Dungeons & Dragons“, but that’s not exactly what this book is all about. If you pick this up expecting to learn how the game of D&D was created and developed, you might be a little disappointed. Yes, there are plenty of details about the early days of D&D, but what this book really focuses on is the business culture of TSR (the company that originally created D&D). Readers who are thirsty for info on the history of D&D itself would probably find Empire of Imagination a much more interesting read. But if you’re curious about the “inside baseball” details of TSR, this is the book for you.

For those that enjoy such topics, the history of TSR is fascinating. TSR is, of course, the company that created Dungeons & Dragons. This book follows TSR from its earliest days in the late 1970’s, all the way to the early 2000’s when the company was purchased by Wizards of the Coast. For people in the know, TSR’s corporate culture is best described as an absolute dumpster fire. What began as a small business started by a group of passionate wargamers, quickly turned into a virtual money-printing machine. But, a number of questionable business decisions eventually led to the ouster of TSR’s CEO Gary Gygax by the board. As this book explains, this controversial takeover actually ended up giving the company a second chance a life. But as time went on, TSR proved not to learn from the mistakes of its founder and later leadership continued to make a number of ill-advised decisions that ultimately left the company virtually bankrupt.

Everything I’ve mentioned above has been common knowledge among tabletop RPG gamers for quite some time. But what’s new in this book are the specific details. The author, Ben Riggs, has conducted a number of interviews with former TSR employees. He’s also managed to get his hands on a number of forgotten documents that reveal some pretty shocking details about TSR’s financial practices.

I will admit, a considerable portion of this book is probably going to be pretty dry reading for the average person. It’s not that it is poorly written, but the author doesn’t shy away from providing details regarding things like marketing strategies, retail agreements, and publishing practices. These are simply things that most people won’t care about. But for a number of readers (myself included), these type of insights can be rather fascinating.

For more general audiences, some of the highlights of this book include details regarding the creation of AD&D 2E, the Planescape campaign setting, the Forgotten Realms and Dragonlance novels, and the buyout by Wizards of the Coast.

Having grown up with D&D, I found it fascinating to watch the timeline of the company unfold in a chronological way. This book does an excellent job of leaving no stone unturned when it comes the business practices of TSR. If you ever wondered why certain products were pushed and others were given the axe, this book will put those questions to rest.

Story: The history of TSR is very well organized here. Despite the unexciting nature of the content, the author does a great job at making the mundane interesting. Still, this book is definately for a very niche audience.

Recommended:  I’m going to be honest, I can only recommend this book for the most extremely hard-core grognards out there. If you grew up with D&D and love details on the innerworkings of corporate culture, this might be a book for you. If not, you’ll probably want to pass this one by.