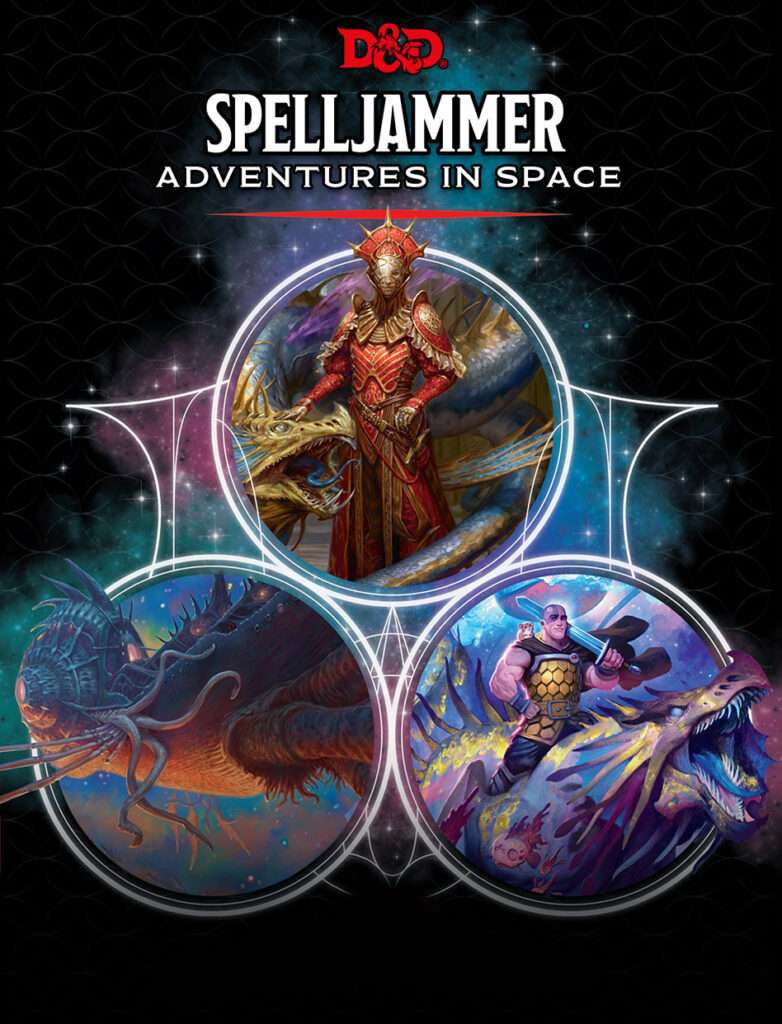 At long last, one of the most sought after and infamous campaign settings is finally here for Fifth Edition D&D… Spelljammer is back! As someone who spent quite a lot of time playing Second Edition, I remember the original release of Spelljammer quite fondly. So, it goes without saying that I was extremely excited to learn that it was finally coming to 5E. But, as one might expect, this new version of Spelljammer comes with some pretty massive changes. I’ve spent the last month pouring over the material and I finally feel ready to share my thoughts. So grab ahold of something sturdy, this is going to be a pretty wild ride.

The first thing you should know is that Spelljammer: Adventures in Space is a collection of three books. The come together in a cardboard sleeve and as an added bonus, there’s also a Spelljammer-themed DM Screen included. The set includes the following three books:

Below, I’ll take an in-depth look at each book individually.

This book represents the meat of the Spelljammer meal. The introduction to the book explains the concept of how outer space and space travel work in D&D. This is where some of the biggest differences between classic Spelljammer and 5E Spelljammer come into play. When the setting was originally introduced back in the day, things worked like this; Each campaign setting was part of a unique solar system. The space between planets in the same system was called Wildspace. Wildspace worked very similar to how “outer space” works in real life. However, each system was contained in a sphere of crystal. These crystal spheres floated in a sea of flammable gas called the phlogiston. But forget all of that… Things are different now. In 5E, Wildspace still works the same way. But the Crystal Spheres are a thing of the past. Now, as one approaches the end of the solar system, Wildspace begins to give way to the Astral Sea (aka: The Astral Plane). Solar systems are now pockets of Wildspace that are separated by the Astral Sea. This is a big deal because it makes a major retcon to the way the Astral Plane fits into the concepts of planar travel. In fact, I’m still trying to wrap my head around the change. I’m not really sure why WotC felt the need to change this. But whatever.

With the introduction out of the way, the next part of the book provides a number of new character options for the Spelljammer campaign. These include space-themed backgrounds and a handful of new races. Many of the race options included here were originally seen in 2E Spelljammer. The new races include the following:  Astral Elves, Autognomes, Giff, Hadozee, Plasmoids, and the Thri-kreen. I’m not going to go into specific descriptions of each race here. But I found each one to be very well thought out and I can certainly see potential for some interesting role playing.

Now, before I go further, let’s talk about the big elephant in the room; the Hadozee. If you’ve been paying any attention to the D&D community online, you’ve likely heard a bit of the kerfuffle surrounding this race. The Hadozee are a race of simian-like humanoids. They were originally designed to be an homage to the ape men from Planet of the Apes. But the problem comes from their backstory. The lore for this race involves their ancestors being captured and sold as slaves. This is problematic from some.  Also, some of the Hadozee artwork included in this book is suspiciously similar to classic “negro minstrel” depictions. All of this combined resulted in a huge backlash. The end result of which caused WotC to completely retcon the history behind this race and update the artwork. The artwork issue I agree with. It doesn’t take a genius to see the similarities there. In fact, it’s pretty asinine that WotC didn’t make this connection on their own. But the lore aspect puts owners of the book in a serious pickle. Should DMs honor the information presented in the first printing of this new set? Or should they be expected to pay money for D&D Beyond (WotC’s official online service) so that they can get the new version of this book with the rewritten lore? I suppose in the end, it’s going to be up to the DM and their players. For what it’s worth, I don’t really have a problem with the whole “slave” backstory. After all, the Hadozee are not real. Their feelings can’t get hurt. And if someone is ignorant enough to draw a comparison to the monkey-like Hadozee and the people of African descent, that really says a lot about that individual. Slavery is a universal concept that not’s restricted to one race, either real or fictional. That’s just my two cents.

With all that out of the way, let’s continue to the next part of the book. Next up is a set of rules for gaming in space. It provides information on how players are able to travel through space, breathe, and even new rules for gravity. The main way for players to get around in Wildspace is through the use of Spelljamming ships. There is a bit of discussion about ship movement and combat, but not really as much as I would like. There’s also a section that provides a few new spells and an explanation on how magic works in a Spelljammer setting. The rest of this chapter provides a number of ship blueprints and descriptions.

The final part of this book describes a place known as The Rock of Bral. This is essentially an enormous asteroid city that floats in WIldspace. The Rock of Bral can be placed anywhere that the DM likes, so it makes for a great outpost when starting a Spelljammer campaign. The information included in this book is sufficient, I suppose. It provides details about the city (ie: locations of importance, notable NPCs, social structure, etc). It’s not nearly as detailed as the original 2E supplement that introduced The Rock of Bral, but it’s better than nothing.

All things considered, I feel like this book contains only the bare minimum that a DM needs to run a Spelljammer campaign. It seems to gloss over everything of importance, and doesn’t give the level of details that many will be looking for (myself included).

Next up is the bestiary. Named after Boo, the infamous Space Hamster, this book is only sixty-four pages long but it does provide just about any Spelljammer-specific monster that a party is likely to encounter in Wildspace. (Some of my personal favorites are the Lunar and Solar Dragons.) Of course, the thirty-nine creatures provided here are not the only possible encounters in space. This book also provides rules for adapting existing monsters to a Spelljammer campaign. (I thought this was a nice touch).

This book contains an adventure designed for players of at least fifth level. It serves to introduce the concept of Spelljammer to an existing campaign world. The adventure itself is loosely based on the story of Buck Rogers, and it is just as campy. Some players and DMs are probably going to hate that. But in truth, Spelljammer as a whole has a pretty camp-heavy history. It takes nearly every Sci-Fi trope you can think of (good and bad) and adopts it.

The main purpose of this adventure is to givs players a taste of everything Spelljammer has to offer. It takes them from their homeworld, to The Rock of Bral, and even beyond. As far as adventures go, it’s pretty structured and on rails. But it does a decent job of achieving what it sets out to do.

All things considered, this is a pretty nice collection for the price. What concerns me the most is that the main book is a very high-level look at Spelljammer. When I think back to 2E, the boxed set that introduced the concept was much more detailed. It was also followed by a number of supplements that provided even more information – and all of it was useful. I don’t even know if WotC is planning on giving us anymore Spelljammer supplements. Perhaps they are expecting players to take things into their own hands and create/publish material on the DM’s Guild. If that’s the case, I think it’s the wrong move. Time will tell. But I do hope this collection isn’t a sign of what’s coming down the road. My absolute favorite D&D setting, Planescape, has been announced for 5E. If it gets the same at-a-glance treatment as Spelljammer, I’m going to be very disappointed.