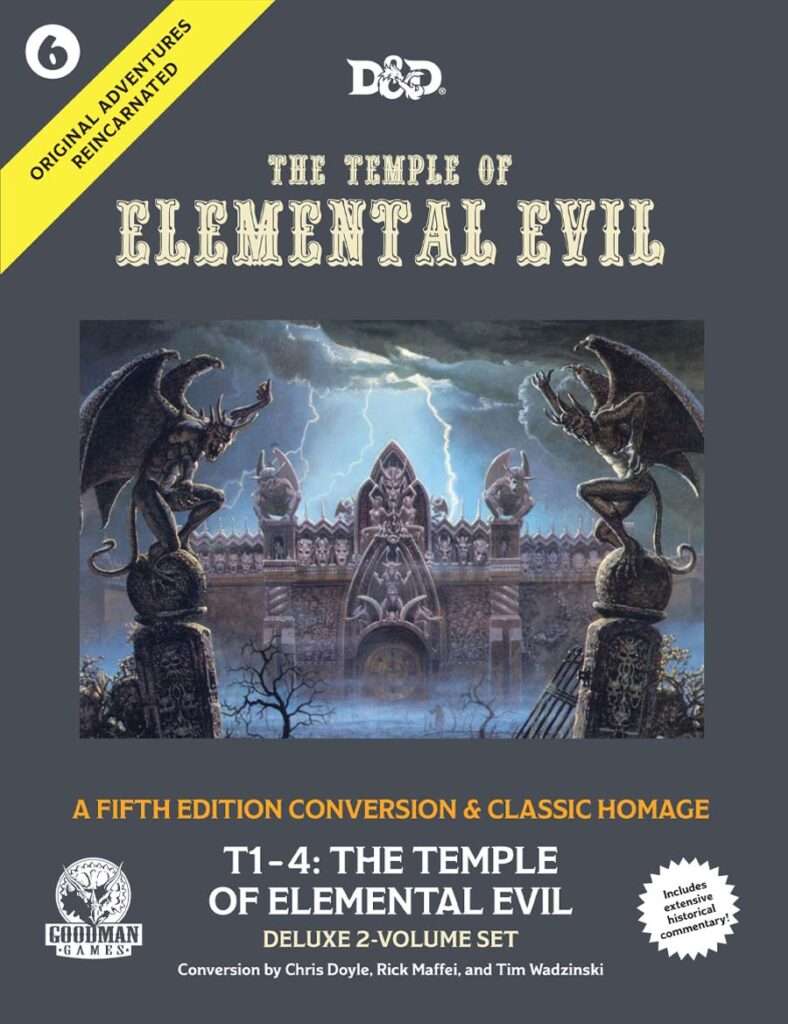 I suppose if I had to pick a D&D adventure to discuss for Halloween, I couldn’t do much better than the legendary Temple of Elemental Evil. Of all the classic D&D modules I played when I was young, this is the one that I’ve carried around in my head more than any other. Everything an old grognard like me loves about classic tabletop gaming is represented here. And now, thanks to Goodman Games, we finally have a fifth-edition conversion of this epic adventure.

I should begin this review by mentioning that, at the time of this writing, this is the most recent Original Adventures Reincarnated release. I’m finally all caught up on this fantastic product line. As always, Goodman Games has brought us a conversion of one the hobby’s most revered dungeons. This release combines the complete The Temple of Elemental Evil module and the original Village of Hommlet module into one collection. As always, both the original printings and the a fifth-edition conversion are included. Due to the sheer size of the content included, this release is actually comprised of two books, complete with a sturdy hardcover slipcase. As has been the case with the last several releases in this line, this quality of the materials are second to none. Each book contains a ribbon bookmark sewn into the binding and a slew of additional materials (maps, commentary, handouts, and artwork).

The adventure starts out normal enough. It’s intended for first level characters of little renown and wealth. Upon arriving in the village of Hommlet, the players are tasked with dealing with a group of bandit raiders who have taken over a nearby fort. But it doesn’t take long for the players to uncover the remnants of an ancient temple. As the players explore the temple, they uncover the sinister history behind it’s origins and do battle with horrible monsters beyond their wildest imaginations. This series of adventures really serves as a mini-campaign, with the village of Hommlet usually being the home base for the player characters.

As is always the case with these conversions, all of the content from the original versions are still present in the 5E presentation. But there’s also tons of additional and expanded material baked in to the new adventure as well. For example, this release includes optional adventure hooks, expanded location detail, rules for level scaling, etc. This time around, instead of including a bunch of “tack-on” or expanded material, most of the additions to the original module are simply integrated into the content itself. I have mixed feelings on that. I would have liked something really new to have been thrown into the pot. But at the same time, I wouldn’t want to run the risk of tarnishing such a classic product. I do admit, a part of me was hoping that the Return of the Temple of Elemental Evil adventure (originally released for 3rd Edition) would have included in this release. But, I also understand why it was not.

All things considered, this is a wonderful presentation of a classic D&D adventure. The format of the 5E conversion is a massive improvement over the original release. Other OAR releases have contained completely new playable content. This book stays away from that, but in my opinion, the re-written and fleshed-out descriptions of various locations really do make the 5E version flow much better than the original release. If you are a DM who wants to give their 5E players a retro dungeon crawling experience, look no further than this.

The Temple of Elemental Evil is available on Amazon and most retail bookstores where D&D material is sold.