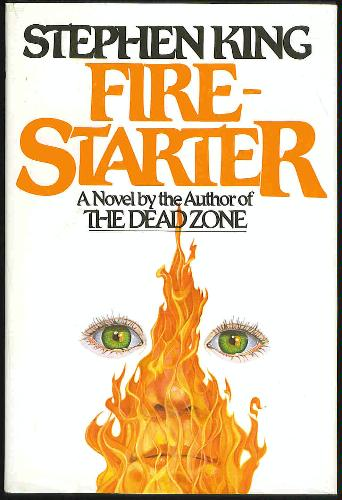 Halloween is almost upon us. What better time is there to curl up with another one of Stephen King’s classic novels? Yes, I know I haven’t really been restricting my King consumption just to the month of October. In fact, I read his books throughout most of the last year. But, can you blame me? Once you dive in, they are pretty addictive.

Today I want to talk about an absolute classic, Firestarter. Like many of King’s books from late-70’s to early-80’s period, Firestarter isn’t exactly a “horror” novel. Instead, it continues to explore the little-discussed world of psionic phenomena, or as I like to call it “psi-fi”.  This is a theme that’s prevalent in many of King’s earliest works. Carrie focused on telekinesis, The Dead Zone explored the concept of psychometry. This book tells the tale of a little girl with pyrokinesis – the ability to start fires with her mind.

This book also touches on a very sensitive, but realistic topic; covert government testing. The early parts of this novel tell the story of two college students, Andy and Vicky, who take part in a special government-funded experiment. The experiment consists of being dosed with mysterious drug called “Lot 6” that produces short-term hallucinogenic effects, but leaves the two students with permanent psychic-based abilities. Andy and Vicky’s new talents are often unpredictable and come with great side-effects. But they become the target of secret government monitoring nonetheless. This fact doesn’t become apparent until the couple has a child (a little girl by the name of Charlie) who exhibits the ability to start fires using only the power of thought. Once this ability becomes obvious, government agents make it a priority to capture Charlie in order to test and exploit her abilities.

The majority of book focuses on Andy and Charlie’s attempts to evade capture. It also touches on Charlie’s struggle to deal with her powers, which only seem to grow in strength as she gets older. As is my usual issue with book reviews, I don’t want to say much more about the plot, or I run the risk of ruining the book. But I will say this much, Firestarter is an excellent example of Stephen King’s early style. It’s a page-turner that’s filled with interesting characters and a set-up that’s all too realistic for my comfort.