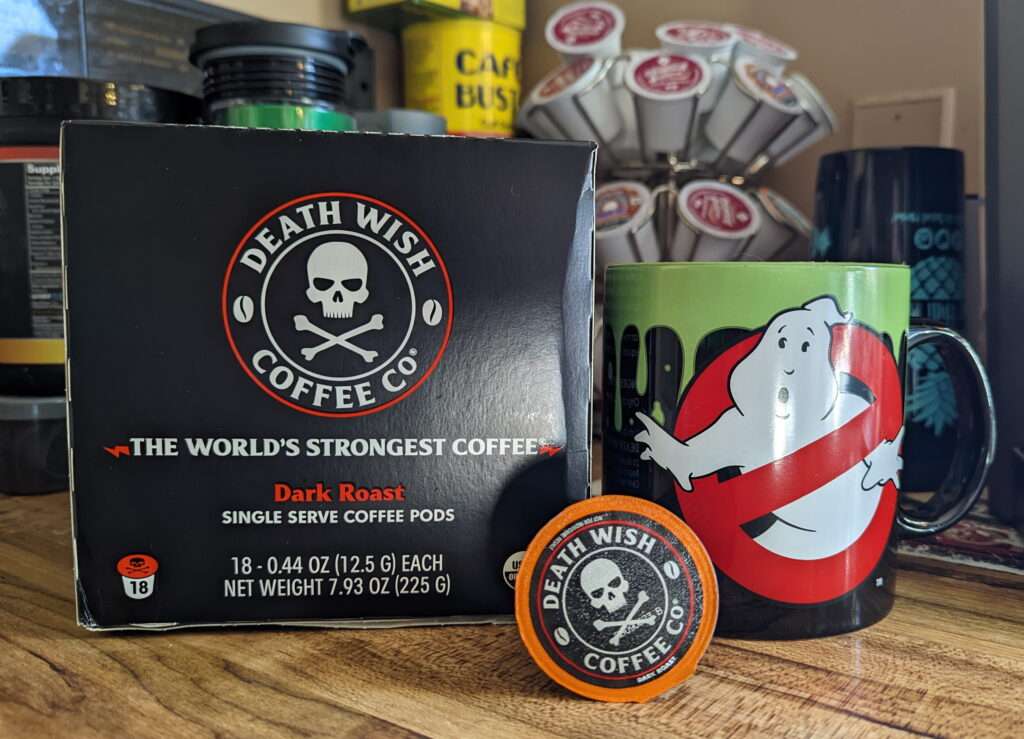 October is here! As I’ve mentioned countless times on this site, autumn is my favorite time of year. I love the crisp fall air, the crunching of leaves, and sitting on the porch at sunrise with a hot cup of coffee. Typically during this time of year I try to review a seasonal coffee of some sort. But this year, there’s very few releases that haven’t been seen before. But don’t worry! I haven’t given up my search completely. I’m sure I’ll find something that just screams “autumn” before it’s all said and done. However, in the meantime, I’m going to roll with the Halloween spirit by trying one of SCARIEST coffees on the market… DEATH WISH COFFEE.

Death Wish Coffee touts itself as “the world’s strongest coffee”. I’ve seen it on my store shelves for quite a while now. But, if I’m being honest, I’ve purposefully stayed away from it. I’m not trying to drink myself into a caffeine-induced coma. And if you think I’m joking, you’d better be prepared to stand corrected. Even though Death Wish doesn’t provide figures on the level of caffeine content in their drinks, independent studies have shown caffeine levels of over 700 milligrams in a twelve ounce serving. That’s nearly double the normal range. So, for the sake of this review, I’m going to tempt fate and actually give this coffee a try. But, let’s not stop there! I’m going to double down and go for the Dark Roast variety as well. Let’s see how it goes…

For starters, this coffee is definitely has a very strong aroma during the brew process. It’s not quite a heavy as Dark Magic or some of the other extreme varieties I’ve tried in the past. But it’s certainly clear from the beginning that this is going to be a stout cup. Despite the aromatic strength of the brew, it also has a rather complex character to it. It smells quite a bit like a house blend. I’m actually kind of curious just what sort of beans go into this. I’m certain that standard Arabica beans are the main ingredient. But there’s also a hint of something else… maybe Robusta? It certainly smells like it. But it’s difficult to say for sure. I don’t really taste them, if that’s the case.

When it comes to flavor, this coffee is actually pretty mild. It’s a dark roast, to be sure. And I didn’t detect the “burnt” flavor that’s all too common in dark roasts – so that’s a plus. But still, I expected something a little more punchy. In the end, I actually felt like the flavor was a bit tame. It was very standard tasting. Which I guess could be good depending on the reason you’ve bought something called “Death Wish”.

I suppose if you’re looking for something to kick-start your day, this coffee will certainly do the trick. But I don’t drink coffee strictly to wake up. I prefer something with a nice complex or comforting flavor. So, with that in mind, I can’t foresee this being something I’ll drink on a regular basis.

Would buy again?: No. Not a bad tasting coffee. But not particularly delicious either. As far as taste goes, this coffee is middle-of-the-road. The caffeine content does make me want to shy away from it. So, it’s unlikely I’ll be busying this again unless I have an extreme need.