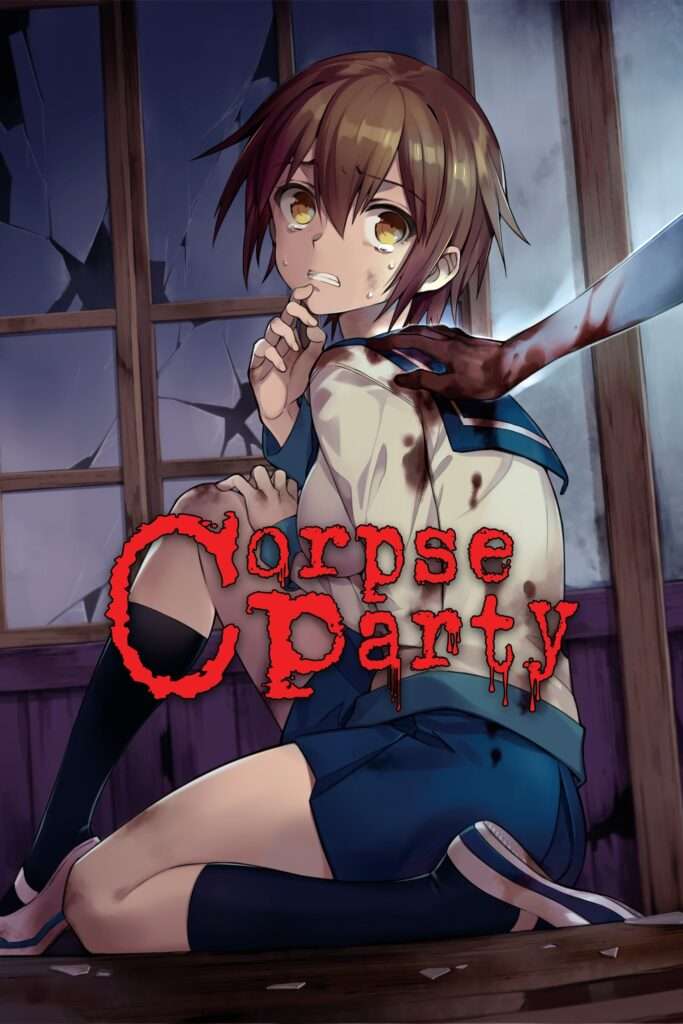 Happy Halloween friends! As many of my long-time readers know, I try to review a scary game in time for Halloween. Typically, I pick a spooky game from whatever backlog era I’m currently working on. For example, in recent years I reviewed Resident Evil 0, Fatal Frame, and Luigi’s Mansion – all games from the GameCube/PS2/Xbox generation. This year, I decided to change things up a little and focus on a game from a different era. Today, I want to talk about Corpse Party.

Corpse Party is game that I’ve wanted to check out ever since I first encountered it on the PSP many years ago. But for one reason or another, I just never seemed to find the time for it. If you’re not familiar with the title, that’s understandable. Corpse Party, while known in the west, isn’t nearly as popular here as it is in Japan. Perhaps that’s because it wasn’t introduced in the US until 2008. But in Japan, the series is much older.

Corpse Party was originally released in Japan back in 1996 as an independent PC title. It’s an odd combination of a no-combat RPG, survival horror, and adventure game. The graphics were modeled after 16-bit-era RPGs, but the content was anything but. An updated version was released in 2008, under the name Corpse Party: Blood Covered. This version of the game is the first one to make it’s way to the west (under the name Corpse Party for PC). A third revision was released just a couple years later as Corpse Party: Blood Covered …Repeated Fear. This third release of the game is the one that most western players are familiar with as it was made available on the PSP and Nintendo DS. Most recently, however, is the 2021 version simply titled “Corpse Party“. This version can be found on nearly every modern platform (PC, Switch, Xbox, Playstation). This 2021 version of the game includes all of the previously released/updated content (excluding a small chapter from the 2008 release – since that content was integrated into the game’s sequel). Complicated? Yes. But don’t fret. To make a long story short; take my word for it. The 2021 release of Corpse Party is truly the definitive version of the game and it is the one that I played for this review. 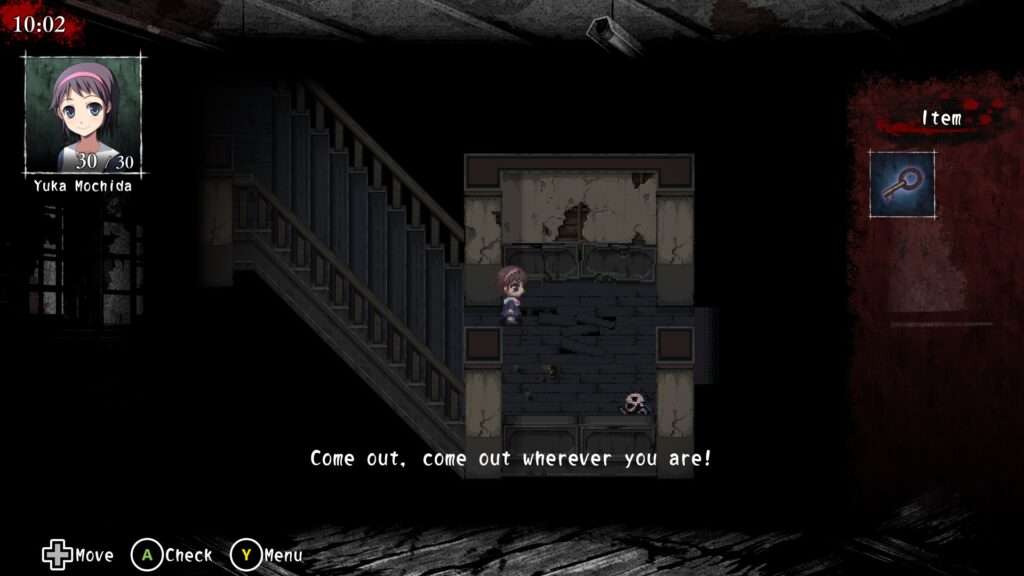 The story of Corpse Party takes place in Japan and focuses on a group of mischievous high school students. The game begins with the students hanging out in a classroom after hours, telling ghost stories. One member of the group suggests that the students participate in a ritual-like charm that she read about online. However, something goes wrong and what started out as a silly, innocent incantation ends up transporting the students to an alternate reality. After realizing that they have become trapped in a dark, twisted world populated with ghosts and corpses, the students must try to figure out a way to escape before they become nothing more than corpses themselves.

The main game is separated into five chapters. Generally speaking, each chapter focuses on a specific group of students. But there are some moments where players bounce back and forth between characters. The point of the game is explore the environment and figure out how to survive. Clues are scattered throughout the school. So it’s important to take the time to explore and examine nearly everything you come across for the best chance of survival. However, there are some exceptions to the “examine everything” rule. Unfortunately, these exceptions almost always result in death. But that’s actually ok. A big part of this game is failing until you get it right. Failure doesn’t always mean death, however. Sometimes you will make choices or do things that allows your character to survive. But, when the chapter ends, you are told that you received the wrong ending. The ultimate goal of the game is to uncover the “true ending” of each chapter, so that you can continue on with the story. 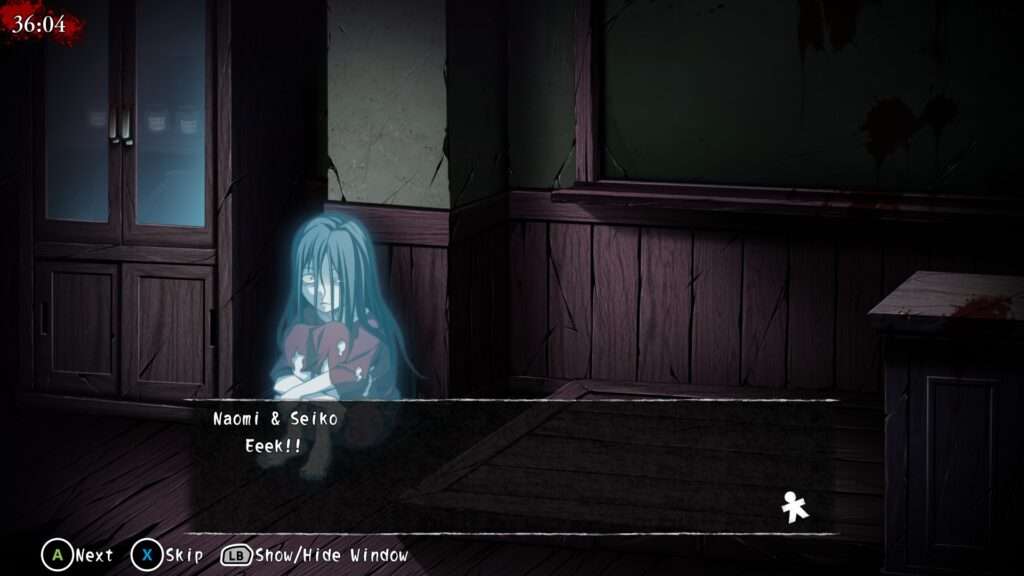 The gameplay in Corpse Party is very simple. For the most part you control a character and navigate your way through the dilapidated halls of a haunted schoolhouse. You can interact with objects of interest and talk to other characters. One thing that you cannot do, however, is engage in battle. On the few occasions where your characters encounter dangerous people/spirits, your only option is to run away.

This may sound simplistic, but in reality, I found it to be rather refreshing. Corpse Party is more about storytelling and atmosphere than it is about game mechanics. The horror elements presented in the game are downright chilling. The visuals are disturbing and grotesque. But it’s the story, which unfolds at a masterful pace, that really pushed my nerves over the edge. Most of the time, when I play a survival horror game, the scares come from my fear of being killed by monsters. So, even turning the corner in a hallway can often lead to anxiety. This game is different. Yes, there’s moments like the one I just described. But for me, the real spine-tingling aspect came from shocking imagery and psychological horror that is slowly fed to you over the course of the game. It really made for a different experience. 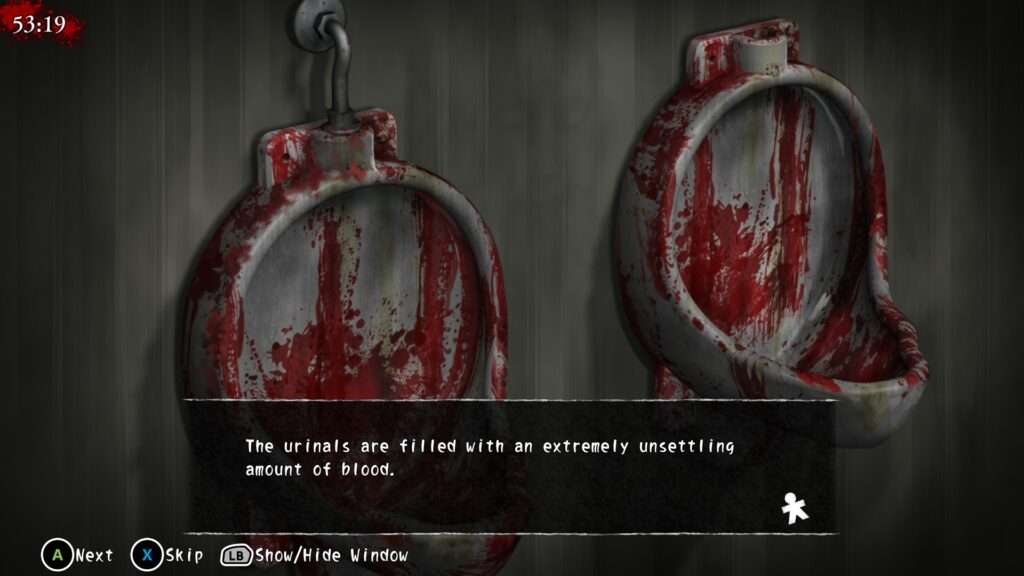 Once you’ve completed the main game, there’s a number of extra chapters to dive into. This extra content was not available in the original 1996 version of the game. But instead, they trickled out little by little with each subsequent re-release. These extra chapters are often very short, sometimes consisting of nothing more than interactive cutscenes. They exist simply to provide more backstory to existing characters and/or tie the original game to the sequels that later followed.

At the beginning, a number of these extra chapters are locked out. Some of them can be unlocked by completing other extra chapters. While others are unlocked by experiencing different endings in the main game or collecting student IDs from the corpses found in the original five chapters. Needless to say, all of this locked content only goes to illustrate the fact that exploration and trial-and-error are what Corpse Party is all about. This is one game that you don’t ever want to use a walkthrough for. Trust me. Just experience this one at your own pace.

I wasn’t sure what to expect when I started playing this game. But I was pleasantly surprised. Corpse Party was unlike anything else I’d come across up to this point. It looks like a classic RPG, reads like a visual novel, but left me feeling eerie and on edge. This is an excellent game to play late at night, in the dark, with a pair of headphones. 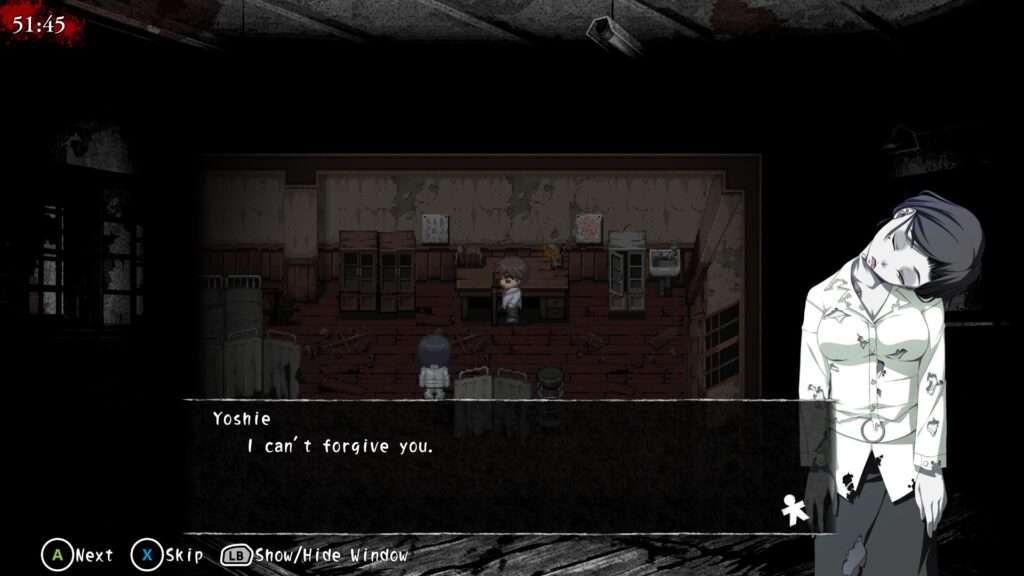 Difficulty: Easy –  Honestly speaking, there’s not a whole lot of challenge to this game as long as you pay attention. Some of the most difficult parts of the game involve knowing what to do (or what not to do) at a particular point in the story. These answers are quite obvious if you take the time to explore and pay attention to your surroundings. There are a few frustrating parts of the game involving a count-down timer. But again, with a little patience these are pretty simple to overcome.

Story: The storyline is what this game is all about. Like any good mystery/horror, there’s plenty of plot twists and shocking moments. It’s also important to mention that this game was made by Japanese developers for a Japanese audience. Much of the humor and cultural content may seem a little unusual to some western players. But in my opinion, that only adds to the unique atmosphere that this game projects.

Originality: For me, this game is an interesting mixture of several well established genres. But I can’t say that I’ve ever seen them crossed over in the way that they are here. This makes Corpse Party feel unlike anything I had ever played before.

Soundtrack: The main theme is a catchy little earworm that pops up throughout the span of the game. But each chapter has its own main theme as well. Overall, these are well done and do a great job at setting the tone. Other musical queues often respond to the action on the screen. There’s also a few unique Jpop tunes tucked away towards the end of the game as well. All of this makes for a very unique and diverse soundtrack. The game also features excellent voice acting, but it’s important to note that the voice acting is strictly in Japanese with English subtitles.

Fun: Corpse Party is certainly a unique game. I can admit that it might not be everyone’s cup of tea. But I found it to be quite entertaining. If you like anime and survival horror, you’ll probably feel right at home.

Graphics: The graphics in this game are mix of 16-bit style pixels and anime OVA artwork. Naturally, the quality of the visuals has improved with each release. But even the 2021 version maintains that classic retro feel, while still looking modern.

Playcontrol: I played this game on the PC, but I still used a controller. Yes, the PC version offers keyboard and mouse support, but it’s not very intuitive. This is a game designed for a gamepad, and it shows. That being said, it really doesn’t matter what gamepad or platform you use, the playcontrol is solid and responsive. I tried it on several different controllers and saw no noticeable difference.

Value: The 2021 version of the game typically sells for around $20 and is worth every penny of that price. However, if you’re frugal, the game can often be found at discount during various digital sales.

Overall score (1-100): 85 – I found my experience with this game to be an overall good one. There’s plenty of replayability and the atmosphere of the game is second to none. Still, it also felt a little loose and disjointed at times. There’s a huge cast of characters and sometimes its difficult to keep them straight. Also, while I like the unlockable aspect of the extra chapters. Many of them feature new characters (perhaps from other games in the series) with no real introduction. Regardless, I left the game with a largely positive experience and I look forward to checking out the other games in the series.