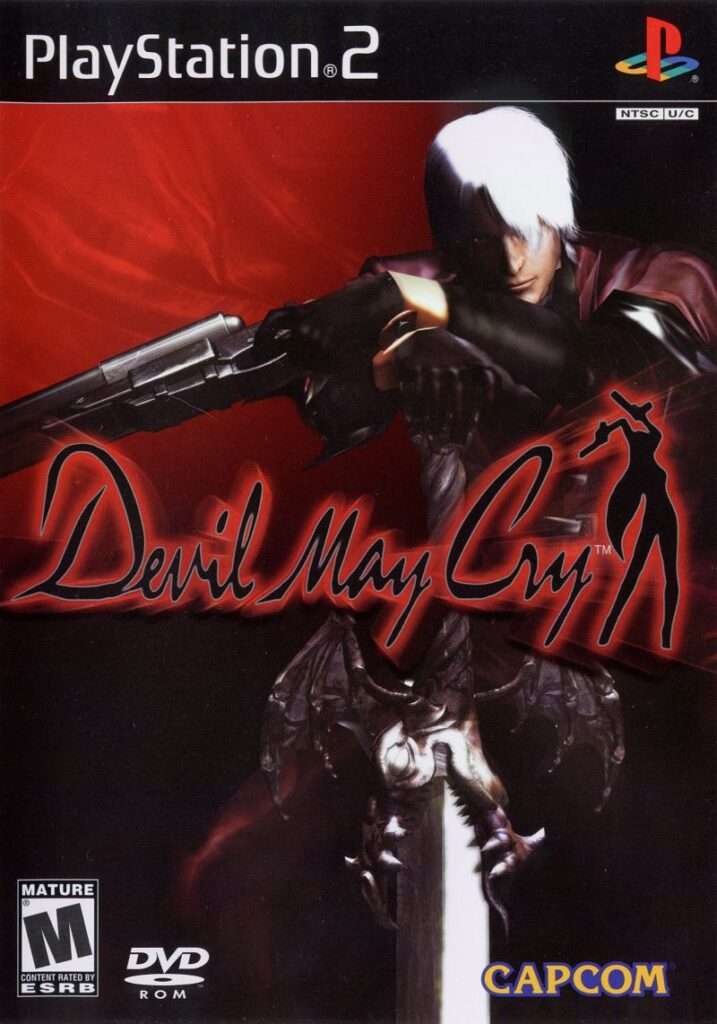 I’m going to start the month off with a review for a game that was added to my backlog after being requested from multiple readers. The game in question is Devil May Cry. This is one that I’ve never played before and one that was not originally on my list. As I said above, about a year ago I asked for suggestions via Twitter for PS2 titles to play and this one received multiple mentions. I knew very little about this game going in. But having now played it to completion, I’m ready to share my thoughts.

As always, before getting into the gameplay itself. I’m going to take a moment to discuss the best way to enjoy the game today. Devil May Cry was originally released as a PS2 exclusive back in 2001. The game proved to be very popular and it spawned a number of sequels. In 2011, the first three games in the series were remastered in HD and compiled under the name Devil May Cry HD Collection. The HD release was made available on the PS3 and Xbox 360. This collection was re-released in 2018 for the PS4, Xbox One, and PC. Aside from bringing the collection to modern consoles, the 2018 version also addresses a number of issues present in the 2011 release. This makes the 2018 release the definitive version of the game. For this review, I purchased and played the PS4 HD Collection. 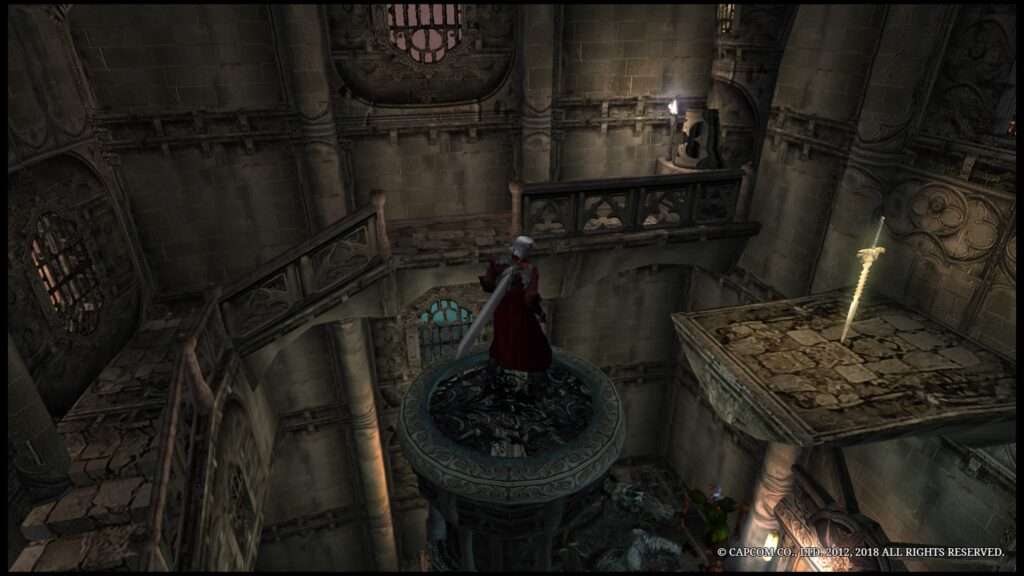 Devil May Cry is an action/adventure game that focuses on the character of Dante. Dante is the offspring of a legendary demon warrior, Sparda. In ancient times, Sparda turned from the ways of evil and sealed his master, the demon lord Mundus, in a dimension known as the Netherworld. For nearly two thousand years, Sparda lived among mortals. In recent times, he married a human woman, siring two sons. After becoming a father, Sparda decided to permanently seal the passage between the Netherworld and Earth. However, this ritual also required that Sparda remain sealed in the Netherworld as well. With Sparda available to defend Earth, Mundus hatches a plan to escape his imprisonment and restart his campaign of terror. In a feat of revenge, he tracks down and slays Dante’s mother and brother. From that moment forward, Dante dedicates his life to hunting demons.

The game begins when Dante meets the character of Trish, a young woman who enters his establishment and challenges him to a fight. After defeating her handedly, Trish explains that she was merely testing his skill. She claims to have knowledge of Mundus’ whereabouts. From here, she leads Dante to a remote location known as Mallet Island. The island is home to a large gothic fortress. The player controls Dante as he explores the castle and searches for Mundus. 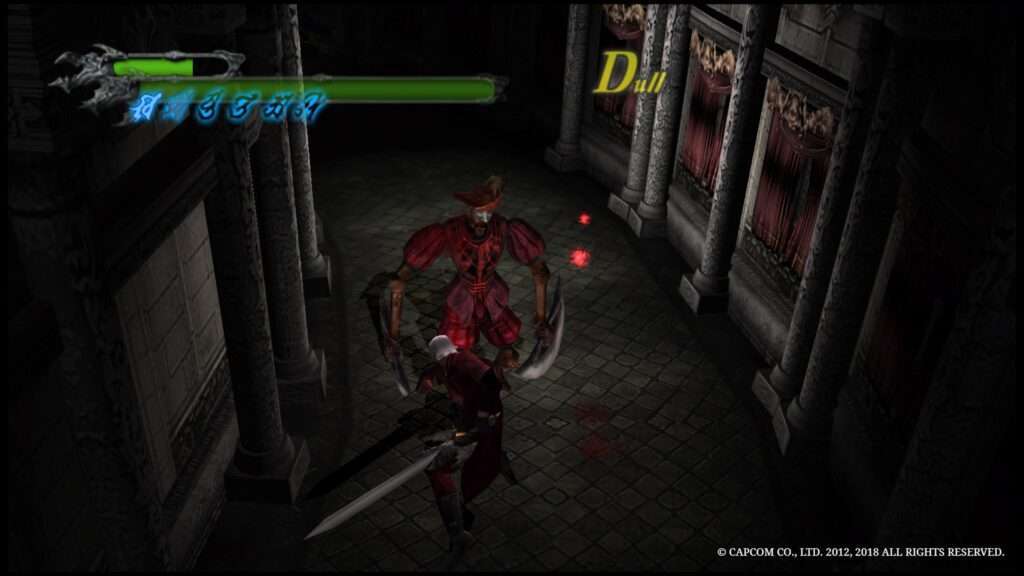 Devil May Cry is a hack-and-slash style adventure game with some platforming elements. Players control the character of Dante as he explores an ancient fortress, battles monsters, solves puzzles, and collects/upgrades weapons. The game is divided into twenty-three levels (or missions). Each mission has a specific goal. Sometimes this is as simple as unlocking a door that leads to a new part of the castle. Other times it can be somewhat complex. Players have the freedom to explore the castle as they see fit. However, more often than not, new areas are typically inaccessible to players at first. Most of the levels in the game are fairly straightforward. But, there’s plenty of nooks and crannies to explore and more often then not, some of the out of the way places often contain hidden items and powerups.

As the player explores, they will find various items that will aid them on their journey. The most common item are Red Orbs. These serve as a sort of currency that the player can use to unlock new skills and abilities. They can also be used to purchase other items that will serve to power-up Dante or give him the edge in battle. Red Orbs commonly drop when defeating monsters. With this in mind it’s easy to assume that a good way to “power through” the game is to farm orbs early on by repeatedly engaging enemies. But, this turns out to be somewhat ineffective. Every action the player takes during a mission is measured. Once the mission is complete, a performance ranking is provided. Players who take too much damage or take too long to finish the mission will receive a lower rank. High marks on a mission are rewarded with orbs.

There’s also a number of secret missions scattered throughout the game. These are optional and typically much shorter than standard levels. Often, these secret missions are timed or require the player to accomplish specific goals (ie: defeat an enemy in one hit). These missions are a great way to earn orbs and even occasionally offer special items as rewards for completion.

The majority of the game is presented in a third-person view. The camera cannot be controlled by the player, but the game does a good job of staying focused on the action. There are a few missions that feature a first-person perspective and these can be a little jarring the first time you encounter them. Thankfully, the game provides the player with instructions on how to navigate these special levels and with a little practice, it didn’t take long for me to get the hang of them. 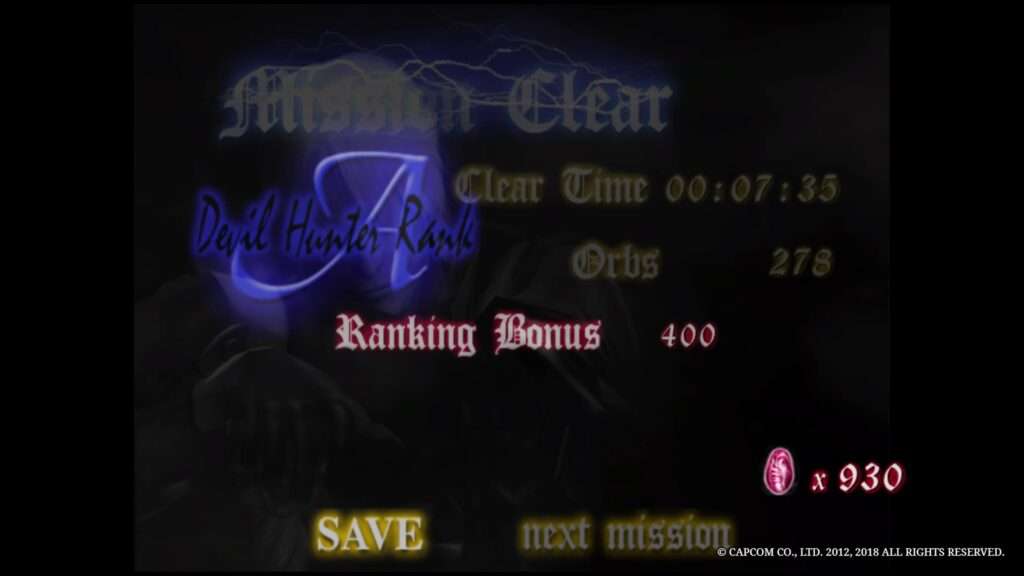 Mastering the combat system is really the key to game. Dante’s default attack is a sword. But he also has the ability to make ranged attacks using guns. As you unlock new skills, these different weapons can be used to create combos and execute special moves. There’s also a gauge called the “Devil Trigger”. As Dante lands attacks on enemies, this gauge slowly charges. Players have the ability to unleash this gauge to increase Dante’s attack power. Planning ahead and executing Trigger Mode at the proper time is big part of successfully mastering the combat in this game.

Scattered throughout the game are a number of boss fights. Each boss has a unique set of skills and attacks. A big part of the gameplay involves the trial-and-error of figuring out what weapons and strategies to use in order to conquer these battles. Several of the game’s bosses are encountered more than once and increase in difficulty with each encounter.

The storyline for the game is told primary through in-game text and the occasional cutscene. I found the story to be pretty interesting, but I would have liked there to be just a bit more. I know that games like these tend to more about action and gameplay than they do with actual storytelling. But I found the plot of the game to be better than I expected and when I was finally finished with the game, I was left wanting more.

As far as replayability goes, there is a New Game + mode that allows you start the game over at a higher level of difficulty, but you also get to keep your existing weapons and skills. The rewards for completing the game multiple times include perks like being able to play as Sparda or unlocking a turbo-charged version of Dante. These are fun, ultimately don’t really add any additional content to the base game.

I wasn’t really sure what to expect when I loaded this game for the first time. But I’m happy to say that I ended up being pretty impressed. Devil May Cry isn’t the first game of its type, but it is one of the earlier examples of third-person hack-and-slash action. It’s been a while since I sat down with this type of game and I found my time with it to be pretty enjoyable! I’m looking forward to see what is store for me with future entries in the series. 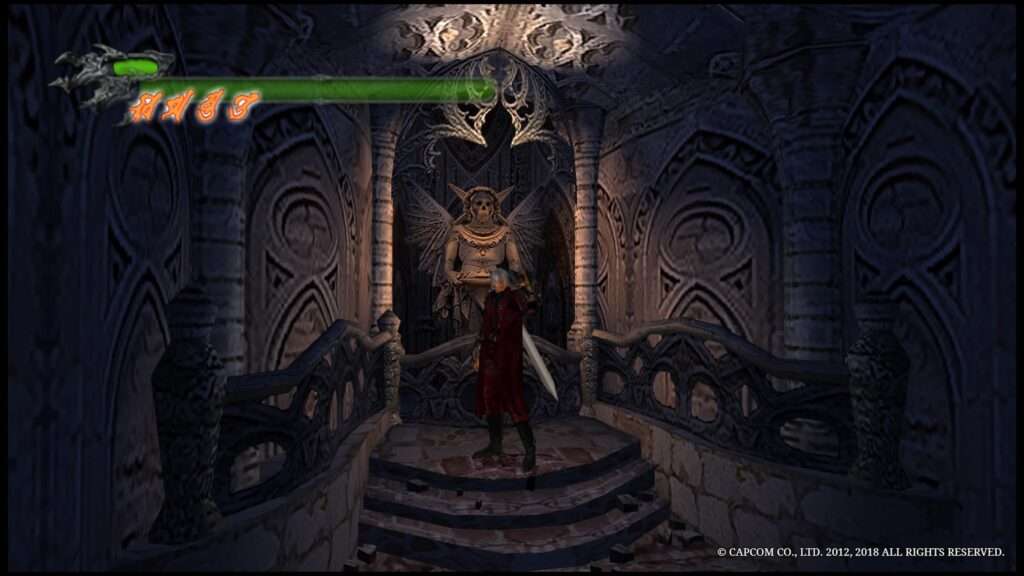 Difficulty: Variable –  When starting the game players can select between Normal and Hard difficulties. Early in the game, if the player seems to be struggling, they be given an option to switch to Easy Mode. This easier option exists because Normal mode is no walk in the park. The majority of the game isn’t too bad, but some boss fights can be pretty brutal at first. Still, with a little patience and perseverance, it’s manageable. Once the game has been completed, another difficulty option becomes available; Dante Must Die. As the name suggests, this mode is extremely difficult. For first-time players, I recommend sticking with Normal mode. yes, it’s challenging. But In the end, you will get better with time.

Story: They say that the story for this game is loosely based on Dante’s Inferno. But aside from some of the character’s names, I feel like it’s a stretch to draw a comparison. Regardless, the story for the game is very well done. I would have personally preferred there to be more cutscenes and storytelling elements in the game itself. But all in all, the game does a respectable job with the time it’s given.

Originality: Action adventure games like this were not exactly new when Devil May Cry first came out. But, I feel like the developers did a pretty good job of making this game feel unique by incorporating ideas like the Devil Trigger and allowing players to switch between a number of different weapons.

Soundtrack: The music for this game is very well done. It’s fitting and appropriate for the setting. The battle themes are great at giving the player a sense of apprehension. Very well executed.

Fun: It took me a little bit to wrap my head around exactly how this game worked. But once everything clicked, I found myself really enjoying everything this game had to offer.

Graphics: Naturally, the HD version of this game looks considerably better than the original PS2 release. But still, the PS2 version was pretty good stuff when it first hit the scene. The game makes excellent use of lighting to set a gothic and creepy mood. Everything from the Dante and enemy sprites to the background textures are all very well done.

Playcontrol: I played this game using a regular PS4 controller and encountered no real issues in playcontrol. Everything felt natural and fluid. My only gripe was the occasional wonky camera-angle or sometimes getting attacked by enemies that were off-screen. But these annoyances were few and far between.

Value: Used copies of the original game can typically be found pretty cheap ($15-$20). But you’re going to get a much better value if you purchase the Devil May Cry HD Collection. This version contains the first three games in the series and typically sells for around $30. This is an insane price for three classic games.

Overall score (1-100): 90 – I was extremely impressed with this game. The formula may seem a bit dated today, but at the time of release, this game was simply a must-have PS2 title. If you like gothic/occult aesthetics and fast-paced action gameplay, this is one title you can’t afford to pass up.