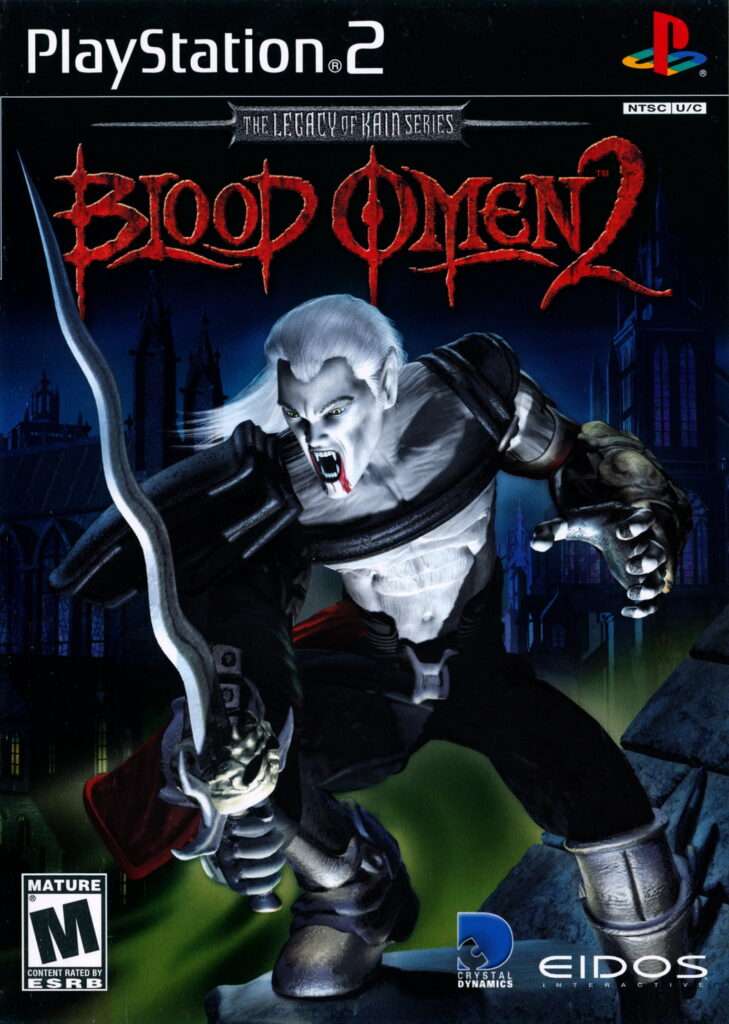 I tried my best to have this review complete by Halloween, but I fell short by a few days. Despite missing my goal, I’m here with a review for yet another chapter in the Legacy of Kain series, this time with Blood Omen 2. If you’re a bit confused by the variety of sequels this series has to offer, don’t feel bad. It is a bit of a mess. To clarify things a bit, this game fills the gap between Blood Omen and Soul Reaver… sort of. You see, this game take place in an alternate timeline that was spawned by the events of Soul Reaver 2. So, it’s both a sequel to the original Blood Omen and also Soul Reaver 2 (in a weird twisted way).

Blood Omen 2 was originally released for the PS2, Xbox, GameCube, and PC. Each version of the game is identical in terms of content, but each port seems to have their own ups and downs. The PS2 version seems to have the lowest resolution of the pack. But, it features a number of minor visual effects not present in the other releases. The textures on the Xbox version don’t look quite as muddy to my eyes and the audio mix seems better in this version as well. But, the Xbox release is also notorious for stuttering when loading textures. Interestingly enough, the GameCube version seems to have vastly superior graphics but the audio quality seems to suffer in this release. Finally, we have the PC version which is the only release of the game that is still easily available for purchase today. From a technical perspective, the PC version is probably the best looking and sounding release of the game. But, it does require a little bit of tinkering to get it to play nice with modern computers. In the end, I suggest going with whatever version is easiest for you to get ahold of – the differences are not that big. Personally, I played the PS2 release for this review, since that is the version of the game that I already owned.

Blood Omen 2 takes place four hundred years after the events of the original game. (The story below assumes that you are familiar with the events of the previous games in the series). Again, it’s important to keep in mind that the version of Nosgoth that appears in this game follows a different timeline than that seen in both Soul Reaver and Soul Reaver 2. In this history, Vorador and Kain give birth to a new race of vampires. Humankind does not take this surge in the vampire population lightly, however. Out of fear from a vampire takeover, humanity goes to war with Kain and his legions. Ultimately, Kain is defeated by the Sarafan Lord and left for dead. Humans regain control of Nosgoth and the remaining vampire population goes into hiding. Secretly, Kain does not die. His body is collected by a small group of vampires (known as the Cabal) and kept alive. The game begins when Kain awakens in the care of the Cabal. He’s lost much of his memory, but he is fueled by his desire to reclaim his former glory and defeat the Sarafan Lord. 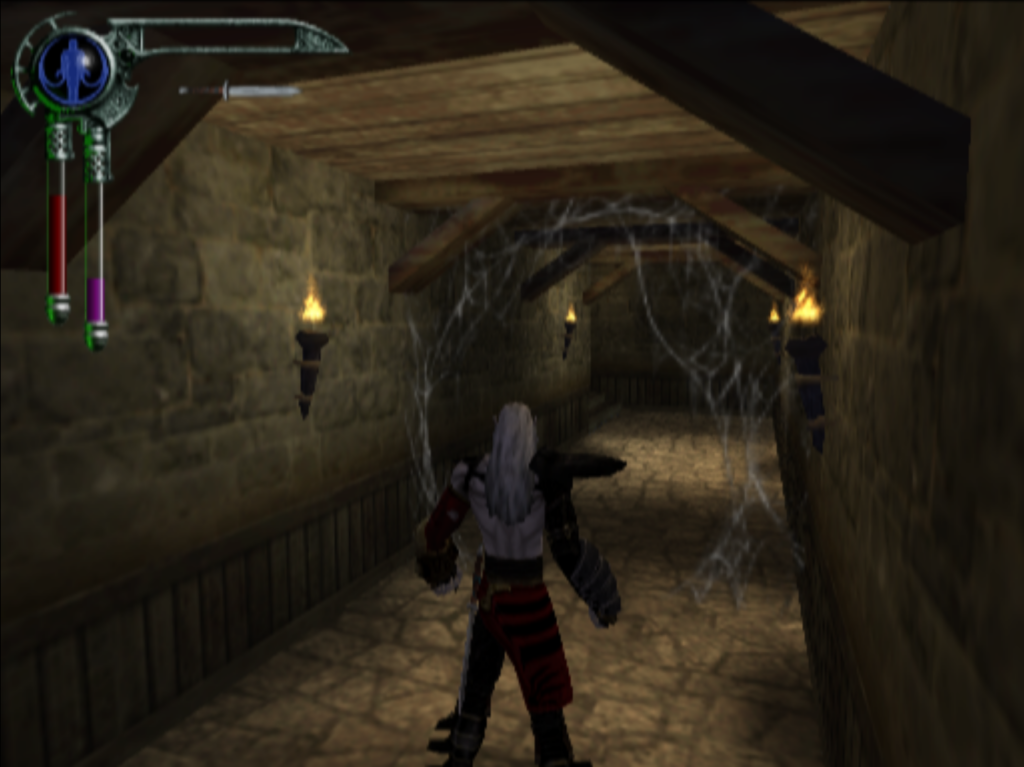 Blood Omen 2 is an interesting mix of the original Blood Omen and the what is seen in the Soul Reaver games. Many of the unique mechanics from Blood Omen are present. For example, Kain is able to drain blood from victims to recover his life, as well as use a number of vampire-like abilities. But, unlike the 2D presentation of Blood Omen, this game is presented in a 3D format much like the Soul Reaver titles.

Whereas Soul Reaver has a fairly heavy focus on puzzle solving, this game tends to lean much more into the action/combat style of play. Yes, there are some puzzle elements present here. But they are pretty basic and pose no real challenge. Killing, harvesting blood, and then killing some more is pretty much the standard formula for this game. Combat in Blood Omen 2 is simple. One button will allow Kain to attack (either bare-handed or with a weapon), another allows him to grapple his opponent, and a third button allows for the execution of special moves. These special moves often require that Kain has a full “rage meter” which builds up over time during normal combat.

Another aspect of this game is the level system. As Kain explores the world of Nosgoth, he will often find special chests containing “vampire lore”. Absorbing lore allows Kain to level up, increasing his ability to take damage.

Some of Kain’s abilities are not directly related to combat. For example, Kain can shift to a mist-form. This is helpful for avoiding detection and sneaking up on enemies. Later in the game, Kain can also attempt to control the mind of NPCs. Really neat stuff! But sadly, the execution these abilities never really seem to work as well as they should. When they do work, they seem to only do so when it is needed to progress the storyline. 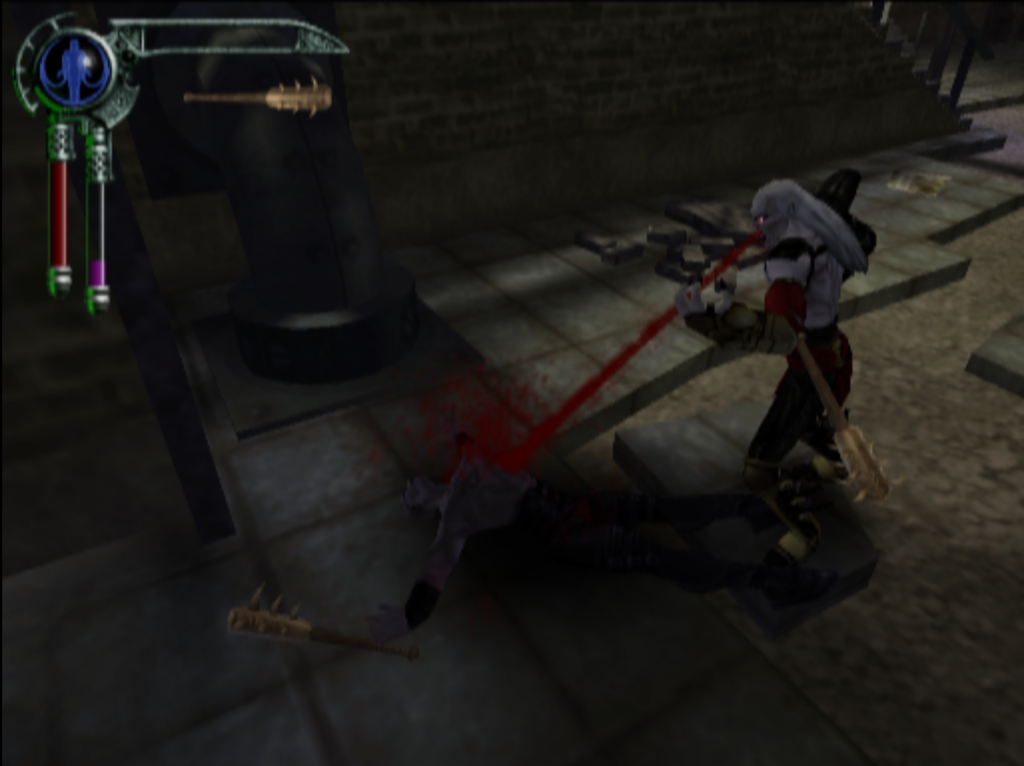 By reading the gameplay details above, it’s easy to get excited. On paper, the mechanics for this game sound pretty compelling. But, in reality, they fall a little flat. Most of the combat in this game is pretty uneventful. Even when engaging multiple attackers at once, it’s pretty much a no-brainer to defeat your enemies. Honestly, the AI in this game is dismal and quite predictable. The only real exception to this rule is the boss fights. Which at first, seem very overpowered. But, once you figure out the tricks to each, they too become easy enough to master.

The atmosphere of the game is very well done. It takes the gothic history of Nosgoth and combines with a steampunk element. This makes for some very cool looking level design. But, unlike the open world of Soul Reaver, the levels in this game are very linear.

To me, Blood Omen 2 feels like it’s filled with a ton of excellent ideas, but none of those ideas have really been baked to completion. This game feels very rushed and unfinished, which is a shame. Because there’s so much potential here. When I first started playing this game, I was admittedly excited. I enjoyed the first two levels quite a bit. But after that, things started to get repetitive, and frankly, a little boring. This is one game series that just hasn’t done much for me. There’s one game left in the Legacy of Kain franchise. Hopefully, it will be the one that impresses me. 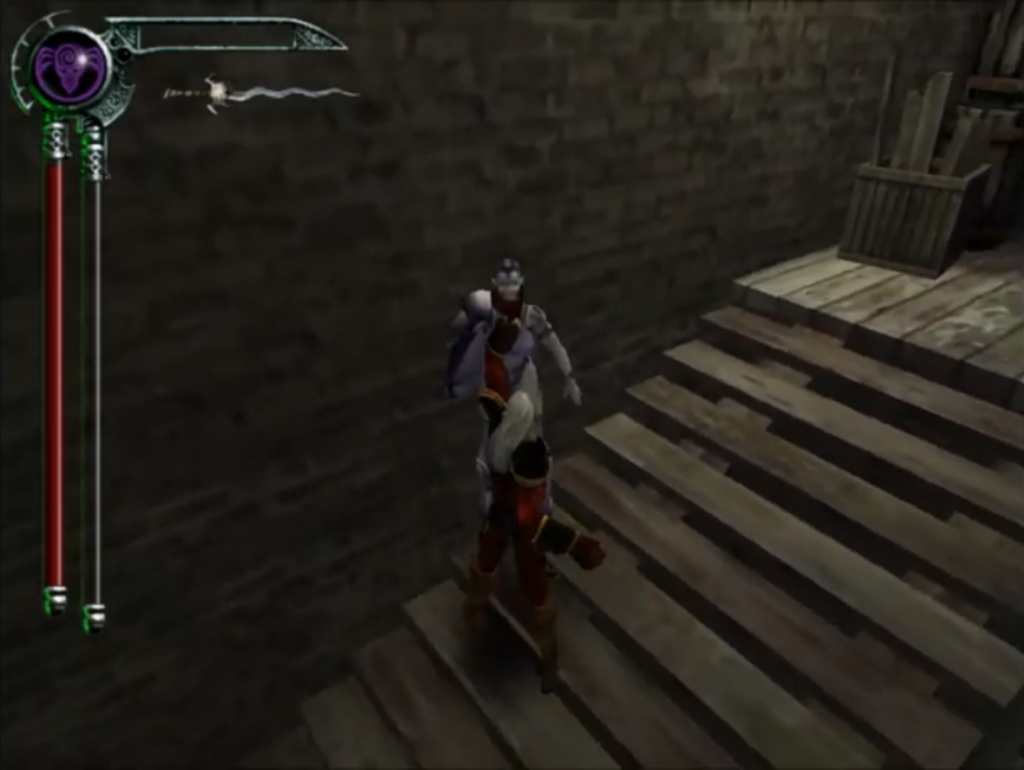 Difficulty: Medium – The majority of this game is fairly easy. The only real exception are the various boss fights that are scattered throughout the game. These can range from simple to downright difficult. However, there’s almost always a pattern or trick that can be used to overcome them.

Story: One thing the Legacy of Kain series has always done well is storyline. That remains true in this chapter. The lore behind Nosgoth is rich and interesting. In fact, I’d love to see a book series that takes place in this gameworld. The whole paradox/alternate timeline can be a bit confusing to casual fans. But, players who are familiar with what happened in the other games in the series will have no issue understanding what’s going on.

Originality: This game tries very hard to stand apart from other 3D action games by focusing on Kain’s vampire abilities. But in the end, all that’s really unique about it is that players are controlling a character that’s absolutely evil instead of being a hero. When it comes to game mechanics, there’s really nothing here that hasn’t been seen before.

Soundtrack: The music is this game is fitting and well done. As usual with this series, the voice acting is of an excellent quality.

Fun: Conceptually, there’s pretty neat elements here that make the game fun to play. Sucking the blood of innocents never seems to get old. But the gameplay does get a bit repetitive at times, and that does seem to drag the fun down a few notches.

Graphics: Considering the day and time that this game was made, the graphics are actually pretty good. 3D gaming was still pretty young at this point, and Blood Omen 2 looks about as good as anything else from the age. I like the use of lighting and fog effects in this game.

Playcontrol: Blood Omen 2 takes a little step backwards when compared to Soul Reaver 2. Granted, the two games use an entirely different engine. But still, many of the advances made by the previous game are not present in this title. The combat isn’t at smooth as it should be for an action game. The game camera also seems archaic compared the previous entry in the series. When it comes to platforms, no system takes a win over another. The controllers are equally responsive. With that in mind, it’s important to note that this game is made to be played with a controller. If playing the PC port of the game, I’d highly recommend using a gamepad instead of the keyboard.

Value:  There’s about 10-12 hours of playtime packed into this game. The game itself is fairly linear and doesn’t really offer much replay value. Still, Blood Omen 2 is available digitally on Steam for $7.00. At this price, you still get your moneys worth even if it’s a pretty quick playthrough.

Overall score (1-100): 70 – Blood Omen 2 is the textbook definition of a mediocre game. It’s not absolutely terrible, but it’s also not particularly good either. The frustrating part about it is that it is a game filled with so many good ideas. But all of them seem to be “phoned in” and largely incomplete. Oddly enough, I feel like, if given the right amount of TLC, a remake of this game could actually be quite successful. It’s a shame. This game should have been better than what fans were given.