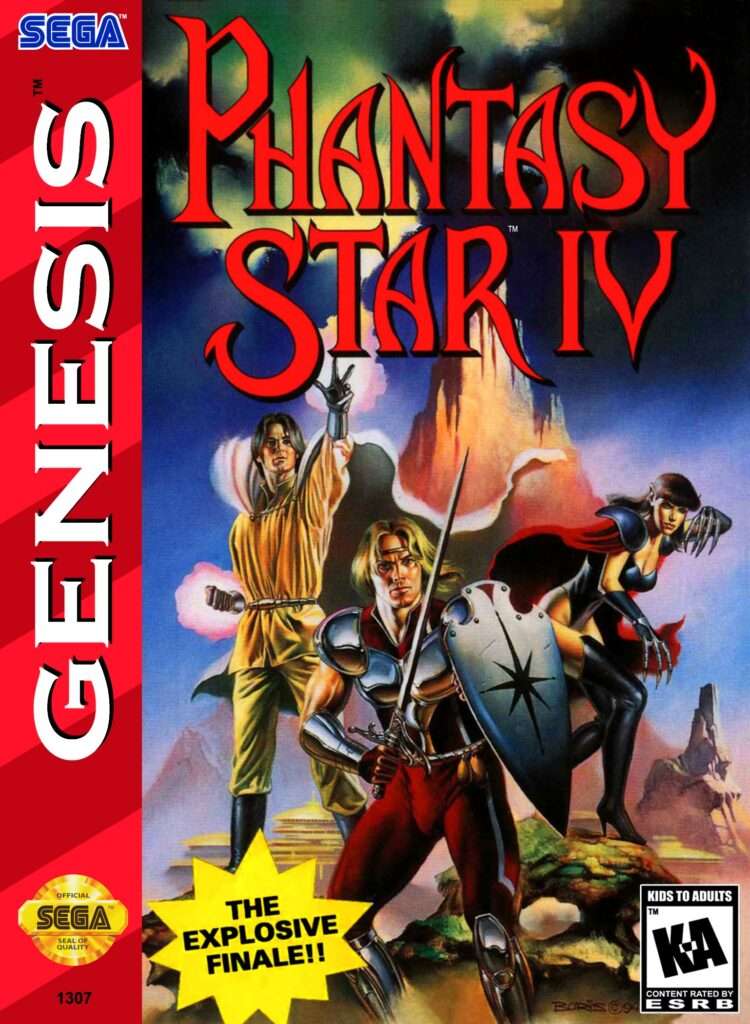 At long last I have completed my playthrough for the final entry in the Phantasy Star series! It took quite a bit longer than I anticipated, but I’m proud to say I have finished Phantasy Star IV: The End of the Millennium and I have plenty of thoughts to share. If you’re a regular reader, you probably know that I’m a lifelong fan of JRPGs. Growing up, I cut my teeth on games like Final Fantasy, SaGa and Seiken Densetsu. But having never owned a Sega machine, Phantasy Star was a series that managed to elude me – that is until I started this blog. To date, I’ve played the first three games in the series. So, I was very eager to see what the fourth and final chapter had in store for me.

As always, before jumping right into my review, I want to take a moment to discuss the best way for players to enjoy this game today. Phantasy Star IV was originally released on the Genesis in 1993, but has since been made available on a number of platforms as part of the Sega Classics Collection. The Nintendo Wii also saw a Virtual Console version of the game, and Phantasy Star IV is also available through the Nintendo Switch Online Expansion Pack. For many, this Switch Online release will likely be the easiest way to get ahold of the game today. But it is worth mentioning that the Steam release of the Sega Classics Collection is notable because it offers mods via the Steam workshop. These mods can often be hit or miss with games like this. For example, one of the more popular mods provides some minor QOL updates (such as translation tweaks, minor bug fixes, etc). This sort of thing is always welcome. But when it comes to this particular game, I didn’t see anything in any of these mods that really seemed worth the effort. The vanilla release of Phantasy Star IV is actually pretty solid. So, for this review, I simply played the game in its original form via my copy of the Sega Classics Collection.

The timeline for Phantasy Star IV is nestled somewhere in between the events of the second and third game (approximately 1,000 years after Phantasy Star II and about 1,000 years before Phantasy Star III). If you were hoping for a resolution to the cliffhanger at the end of Phantasy Star II, I hate to tell you, but you won’t get it here. Like all of the Phantasy Star games thus far, this chapter features a self-contained story but there’s still plenty of links and references to the other games in the series. This game begins on the planet of Motavia – a world that should be familiar to fans. But things are no longer the way they were in Phantasy Star II. The planet has ceased to be under the influence of the advanced climate control systems we saw in that game. Instead, the planet is now in a full-blown ecological crisis. This entry starts by focusing on the character of Alys – a  young monster hunter who is hired by a local academy to eliminate some monsters infesting the campus. However, as Alys begins to look into the situation, it becomes obvious that the recent monster surge is closely related to ecological problems of the planet. Players control Alys and her companions as they learn the truth about their planet’s history. During their journey many forgotten secrets will come to light. Their adventures will take them all over the solar system and eventually to the ultimate confrontation with an ancient evil of eons past. 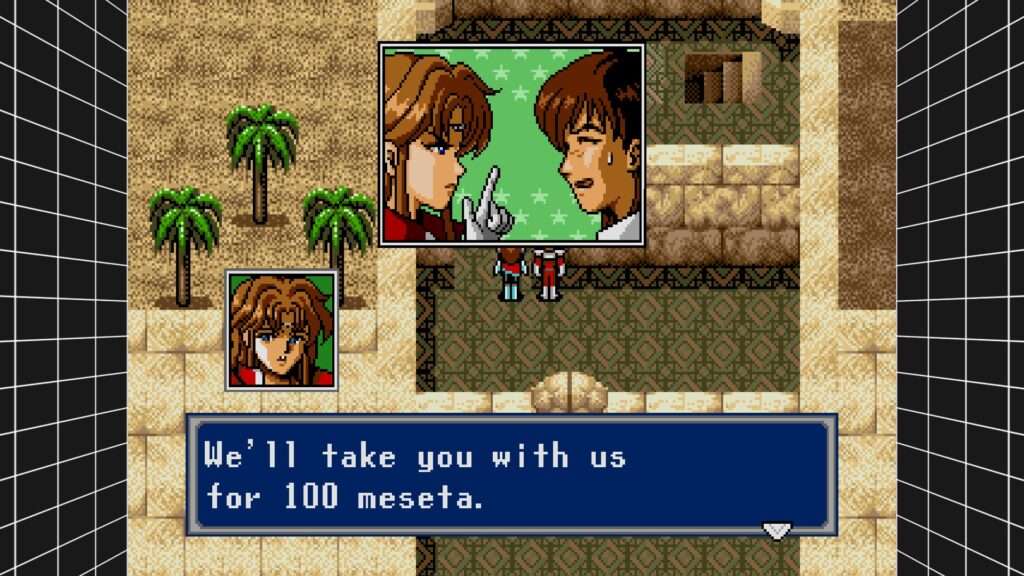 Phantasy Star IV continues the series’ tradition of blending a fantasy RPG with sci-fi elements. Characters cast spells and do battle with swords and shields. But it’s just as common for characters to fire guns or pilot motorized vehicles. If you’ve played any other games in the series, then you should have a pretty good idea of what to expect. Phantasy Star IV is presented in the classic top-down JRPG format with turn-based battles. The majority of the game consists of visiting different towns, talking to NPCs, buying new items, then moving on the the next stop (with the occasional dungeon and random battles in between). Like I said, it’s all standard JRPG fare. This big difference here is that it’s done extremely well. For the first time in the series, nearly every aspect of the game seems absolutely exceptional. The storyline is top-tier, the soundtrack is catchy, and the graphics are a prime example of 16-bit visuals.

All of that sounds pretty good, but it’s really nothing that hasn’t been seen before. You might ask, is there anything new brought to the table with this chapter? The answer is yes. One area where this game really innovated is the combat system. Yes, Phantasy Star IV features turn-based combat. But it also adds a few new twists to the formula. For starters, there’s a combo mechanic. Players are able to chain certain skills and abilities together to unleash special (and often unexpected) side-effects. These combos are not disclosed in the game. So players are encouraged to experiment in order to discover them. Second, once a certain combo is figured out, players can create macros that make executing these combos easier. It’s easy to see how this skill-chain and macro system work together to add a whole dimension to what might feel like a run-of-the-mill turn-based combat system. Of course, today these mechanics don’t seem as innovative as they were in 1993. But as someone who grew up playing RPGs, I can tell you that this sort of thing was a pretty big deal. 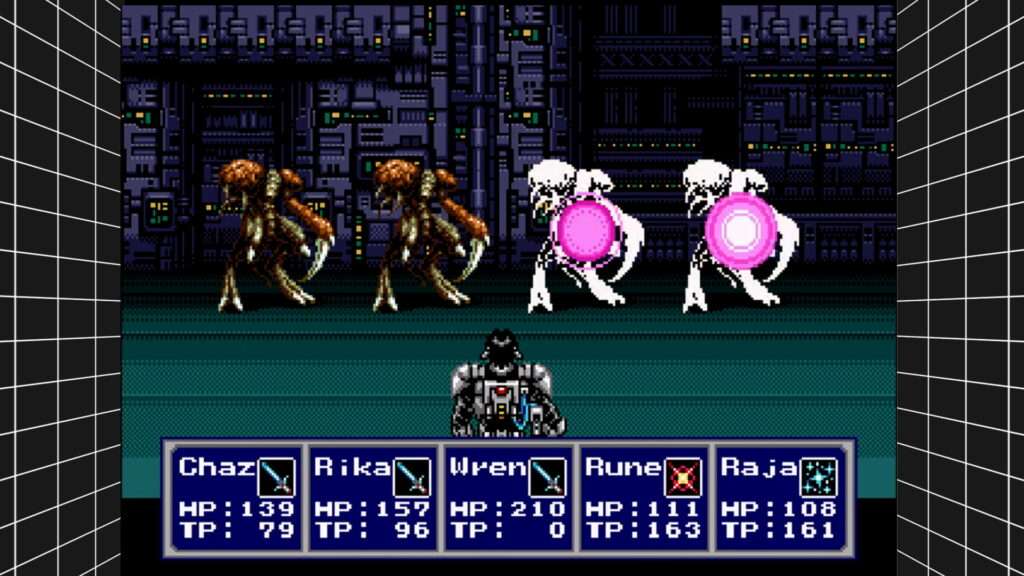 Having now played all of the games in the original Phantasy Star series, I can say without a doubt that this entry is probably the most enjoyable of the four. It really takes all of the classic elements of a retro JRPG and presents them in one pretty, polished package. In many ways, Phantasy Star IV could be considered a contender for the title of “greatest 16-bit JRPG”. It certainly has its selling points. But, if I’m being honest, it just doesn’t have the same magic as something like Final Fantasy VI.

Still, if you’re a fan of the genre, this is one game that you should really take the time to play and enjoy. In one form or another, the entire classic Phantasy Star series is now available on Nintendo Switch. But even so, I think it’s well past time for there to be a proper compilation. Maybe in the years to come Sega will see fit to give us one. Until then, if you’re curious about the series but not sure if you want to invest the time it would take to play all four, this is the game that I recommend. 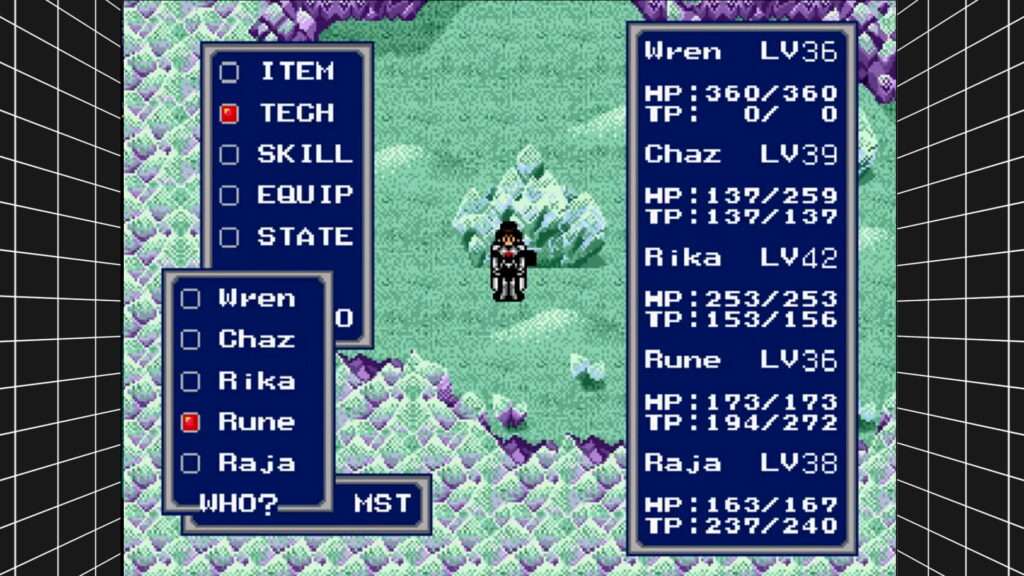 Difficulty: Easy –  Of all the games in the series thus far, I find Phantasy Star IV to be the easiest in terms of actual difficulty. There doesn’t seem to be as much of a need to grind levels in this game as there was in previous entries. Of course, old habits die hard and I still found myself doing a little grinding here and there. Perhaps that’s why the game felt easier? I don’t know. What I do know is that as new playable characters were introduced in this game, I didn’t really feel the need to spend hours in battle so that they could catch up to the rest of the group. Of course, some of the game’s dungeons still provided a little bit of a challenge from time to time. But in terms of overall difficulty, this game seemed to be a breeze.

Story: I was really hoping that I’d get some resolution to the Phantasy Star II storyline with this game. As it turns out, that wasn’t case. This game continued the trend of presenting a self-contained story with deep ties to the overall series lore. Still, the tale told in this game is the very definition of “epic”. Sega really pulled out all the stops when it came to writing the storyline for Phantasy Star IV.

Originality: The biggest innovation in this title comes from new battle mechanics. Other than that, nearly everything in this game has been seen before. Still, this game doesn’t feel tired or boring at any point, and that’s what is most important.

Soundtrack: The music in this game is probably the best in the series so far. Excellent composition, fitting themes – just catchy/toe-tapping melodies here.

Fun: If you like classic-era JRPGs, this is the game for you. It takes the best the genre has to offer and presents it in one nice package. I honestly wasn’t expecting a whole lot when I started this one. But I really enjoyed my time with it.

Graphics: After the drab graphics we were given in the last game, nearly anything would have looked better. But, Sega went above and beyond. This game is an excellent example of great 16-bit RPG artwork. Colorful anime style artwork, detailed overworld textures – it’s all here.

Playcontrol: Fair warning here – I’ve never played this game on its native hardware. So I have no idea how it may feel with a SEGA controller in your hand. I played using both an Xbox One and Switch Pro controller on my PC and encountered no issues whatsoever. The game controls were responsive and accurate no matter what hardware I used.

Value: Your best bet for playing this game is by getting a copy of the Sega Genesis Classics collection. This collections sells at full price for $30 but can often be found on sale for considerably less. For this price you not only get Phantasy Star III, but a slew of other classic Sega titles. If you’re looking for a copy of the original Genesis release, be prepared to pay over $50.00 for a used copy.

Overall score (1-100): 90 – By far, this is the best game in the Phantasy Star series. Classic RPG action with beautiful visuals, music, and a great story. Still, the game is a little short for an RPG and aside from some great combat innovations, it fails to introduce anything really new to the genre. Even so, I can’t deny that this is one amazing game. If you like RPGs, this is an underrated gem that’s very much worth your time.