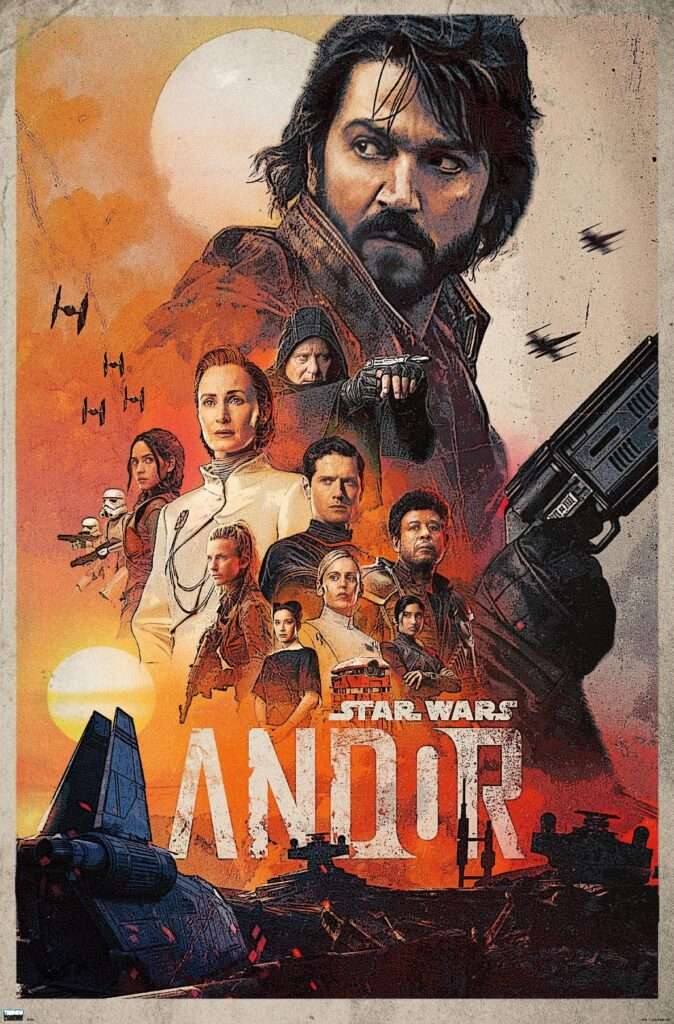 Andor was one of the first live-action series announced by Disney several years ago. Ever since, it has been the subject of much speculation. Obviously, the series was to focus on the character of Cassian Andor (introduced in the Rogue One film). While most fans agreed that Andor was an excellent character, a large portion of the fan community (myself included), struggled to understand just how Disney planned to make a series based around such an obscure character. After all, Andor’s inclusion in Rogue One was a big part of the film, but admittedly, his role was very limited to the events in that story.

The answer lies in the fact that Andor is much more than just a series about the character of Cassian Andor. Instead, it is actually more like a prequel to Rogue One. Yes, Cassian Andor is the main character here, but a large portion of this show focuses on the earliest days of the rebellion against the Empire. To explain what I mean by this, I’d like summarize this show by breaking it down into three distinct story arcs.

The first few episodes of this series, do indeed provide a detailed backstory on the character of Cassian Andor. It details his life as a child, and follows his story to early adulthood. It is at this point in his life, that Andor has his first brush with a what will eventually become the Rebel Alliance. Andor is a scrapper who moonlights as a thief. During one of his adventures, Andor is forced to kill a low-level Imperial in self-defense. The incident forces Andor to go into hiding. This event also gets the attention of a man named Luthen Rael. By day, Rael owns an antique shop on Coruscant, where he hob-knobs with his elite clientele. Secretly, however, he deals in contraband and supplies valuable items/intel to various rebel cells in the galaxy. Rael has ambitions of bringing the various rebel cells together. But he also knows that doing so will require a lot of capital. He hires Andor to be part of heist that will rake in more than enough money to fund the foundation of a proper rebel alliance. The next few episodes focus on Andor and his involvement with this rebel cell as they pull off the heist.

The second arc details the events that follow the heist. Andor leaves the company of the rebels and, after taking his pay, goes on to live a carefree life under an assumed identity. However, through no fault of his own, he gets mistaken for a troublemaker and is arrested. He is sentenced to several years in an Imperial prison. At this point in the show, the next several episodes focus on Andor’s life as an inmate and how his treatment by the Empire opens his eyes to the true injustice of the Emperor. As you might expect, Andor begins to plot his escape from captivity. Alongside these events, the show also shifts and focuses heavily on the day-to-day life of a young Mon Mothma. Naturally, it is revealed that she works closely with Luthen Rael.

The third arc begins after Andor successfully escapes. He learns that Empire has pieced together his involvement with the rebels. As a result, his former community is under occupation. The final episodes of the show detail the slow burn that eventually leads to a full-scale uprising against the Empire.

When summarized, like I did above, the storyline seems pretty typical for a Star Wars story. But in reality it is anything but. In fact, one of the biggest complaints that I heard from friends was that Andor didn’t feel like Star Wars at all. For starters, the pacing is very slow. The events above could easily be condensed to fit into a single two-hour motion picture. Instead, they take up a nearly twelve hour television season. Second, the series has a very adult nature. It deals with political intrigue, interpersonal relationships, and moral struggles. There’s violence, explicit language, and peril. It’s not your typical friendly Star Wars.

I will openly admit, that when I first started watching this show, I wasn’t sure what to think. The first three episodes didn’t really impress me. But I stuck with it and I have to say that it gets better very quickly. By the time Cassian ends up in prison, I found myself eagerly awaiting every new episode. Still, it is true that this isn’t a show for everyone. Kids will likely find it somewhat boring and confusing. This is Star Wars for an adult audience. If you go into the series knowing that, you’ll will be better off.

The show ends with a bit of a cliffhanger. So I’m certain we will be seeing a second season. Hopefully we won’t have to wait as long this time around.

My final say on this series is that you should approach it with an open mind. If you’re a serious fan than this show will no doubt intrigue you. If you’re someone who’s simply watched the nine films in the Skywalker Saga and you don’t know much else about Star Wars lore, this probably isn’t the best starting point for the expanded universe.