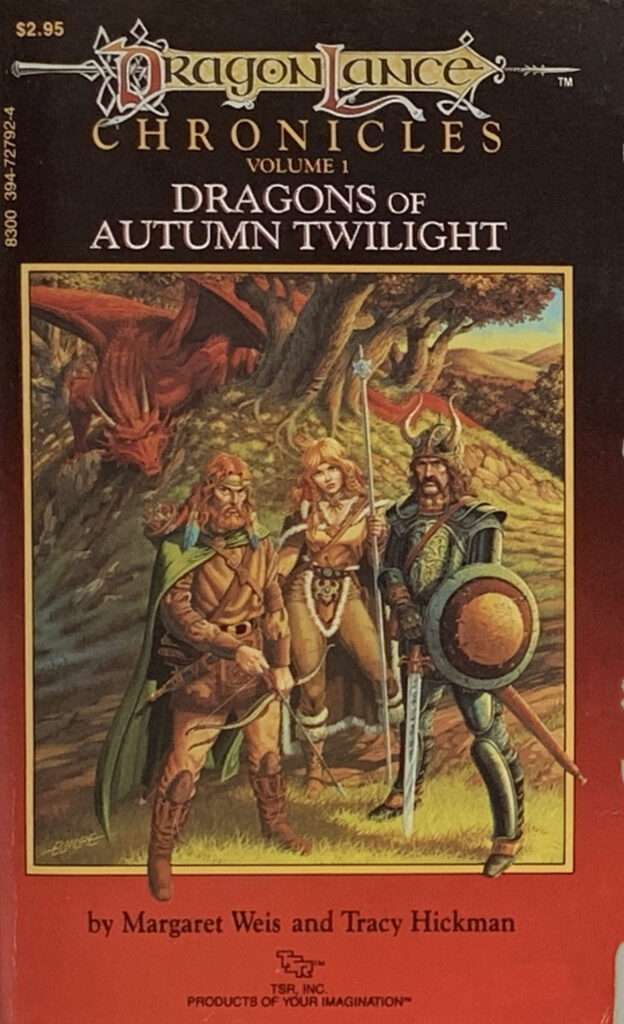 One of my favorite things to do this time of year is to get out a soft blanket, pour a fresh mug of coffee, and curl up with a good book. When I was younger, a good portion of my autumn afternoons and evenings were spent this way. Sadly, as an adult, I don’t get as much time with my books as I’d like. But, I still make sure to carve out at least a few hours every week to read. If you frequent this site then you know that I like to read a little bit of everything. Biographies, science fiction, and horror are some of the genres that I’ve covered on this blog before. But there’s another genre of fiction that has always captured my attention; fantasy.

Many old grognards will tell you that their introduction to the swords and sorcery genre began J.R.R. Tolkien. That was not the case for me. The first fantasy novel that I ever got my hands on was Dragons of Autumn Twilight by Margaret Weis and Tracy Hickman. If you ask me how I obtained this book, or what made me want to read it, I honestly couldn’t tell you. The truth is, I don’t remember how this particular paperback ended on my bookshelf. But for as long as I could remember, it was there. Perhaps it was something I bought at a bookfair on a whim. Or maybe a friend brought it over and left it. Whatever the reason, it ended up in my collection. What I do remember, however, is reading it for the first time. It was in the fourth grade and I was home sick from school. I didn’t feel well enough to sit out in the living room to watch TV or play video games. I decided to pick something off of my bookshelf instead. I should pause here and mention that I had been an avid reader from a very young age. I remember my third-grade teacher telling my mother that I could read at a tenth-grade level. So when I tell you that I picked up this book around the age of ten and devoured it in under two days, I’m not telling you a fish story. It happened.

Dragons of Autumn Twilight was unlike anything I had ever read before. Until that day, my reading had always been restricted to age-appropriate things like Judy Blume books or the Encyclopedia Brown series. But here was something new! A book that took place in a fantasy world filled with elves, dwarves, and goblins! These things seems common in todays pop-culture. But at the time, having never heard of Tolkienesque fantasy, these were entirely new concepts to me. On top of that, both the writing and the story were absolutely incredible.

Aside from opening my mind to fantasy writing, this book also accomplished something else. It introduced me to Dungeons & Dragons. You see, this novel was published by TSR, the company that created D&D. In the early 80’s, TSR decided that it wanted to publish a series of D&D adventures that took place in an entirely new world. To help promote this new campaign setting, it also ordered a series of novels to accompany this new release. The campaign was called Dragonlance. And Dragons of Autumn Twilight was the first novel based on the campaign material. I don’t think TSR was prepared for just how popular this new series of books was going to be. The Dragonlance Chronicles trilogy became an immediate fan favorite. I credit this popularity to both the wonderful writing style of the authors as well as the excellent character development.

From the very first pages of this book, the writing is descriptive and engaging. The opening scene takes place in a tavern. And just reading those first few paragraphs gives me a sense of comfort and paints a picture that immediately sparks my imagination. As the book continues, we are introduced to a number of characters. It is these characters that are the magic behind the Dragonlance story. Each one is unique, with the own loveable quirks and personalities. The way the authors have these characters play off one another is nothing short of masterful. We meet Tanis the Half-Elven, a man of mixed race who struggles with own identity, while also playing leader to his band of friends. We meet the brothers Caramon and Raistlin, one is a kind-hearted oaf, while the other is a conniving magician. There’s a handful of other wonderful characters as well, but I’d rather you meet them for yourself and see what makes them so special instead of letting me introduce them. Trust me, any description I could give does them no justice.

The story itself is nothing short of spectacular. It focuses on a group of old friends who, after several years apart, meet up at their favorite tavern. However, the state of the world at the time of their reunion is one that is very different than it was when they parted ways. A new government has taken over, strange creatures have been sighted outside the safety of town, and whispers of a coming war drift on the air. It is at this reunion that our cast of character find themselves suddenly thrust into the middle of this turmoil. But what starts out as a hasty escape, soon turns into an quest of divine revelation. There’s so much about the story that I want to share with you. But it is something that’s really best experienced by reading the book.

If you’ve never had the pleasure of sitting down with this novel, I urge you to do so. It doesn’t matter if you consider yourself to be a fan of fantasy or not. This book is written in such a way that makes it accessible to any reader. You don’t have to be a D&D player to understand or enjoy the plot. Everything you need is provided to you right here, in the pages of this novel. And if you want to full experience, read it during these autumn months. The events of the novel take place during this time of year and reading it during the season enhances the experience that much more.

Story: Well written and character driven. The world of Dragonlance is rich with history and it is presented here in a masterful way. This is one of my all-time favorite books.

Recommended: Anyone. This is an excellent entry point for those who might be curious about fantasy literature. Great characters, great plot. Plenty of action and humor.