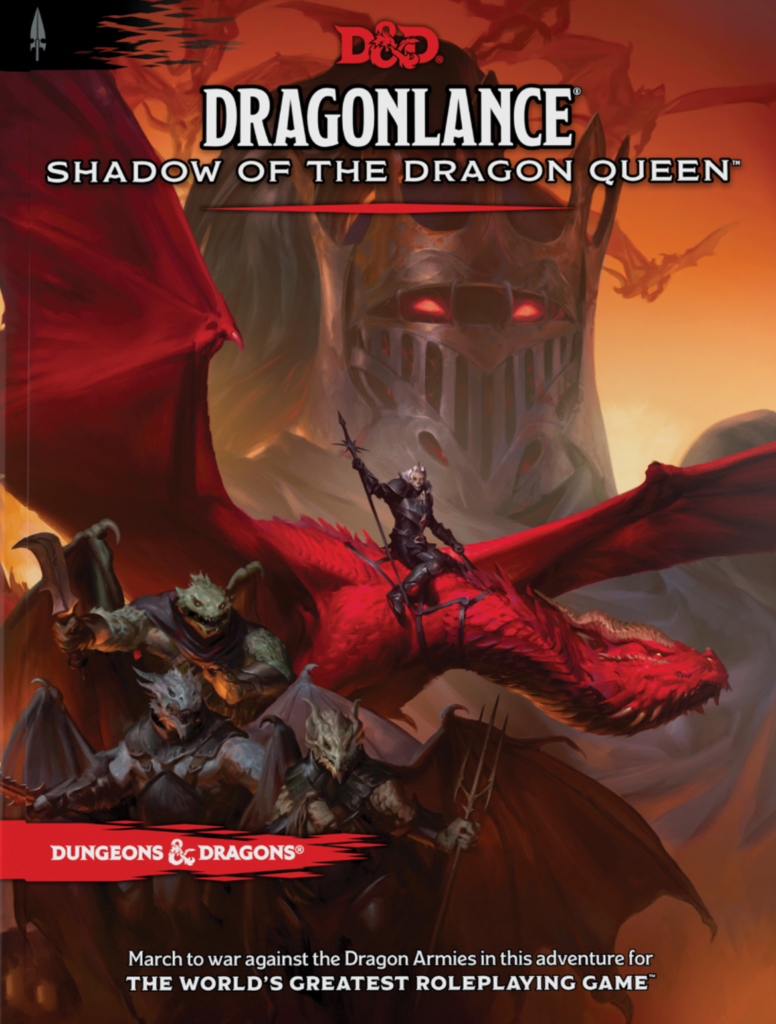 They said it wouldn’t happen, but they were wrong. It’s finally here, Dragonlance has been brought to fifth edition D&D. That’s right, today I’m going to talk about Dragonlance: Shadow of the Dragon Queen. But before I dive right in, I want to be clear about what this review is and what it isn’t. You see, there were two very different products released recently that bear the “Dragonlance” name. This book, Shadow of the Dragon Queen and a board game called Warriors of Krynn. Obviously, these are two different products. But they do tie-in together. In fact, WotC would very much like you to buy them both and use them in tandem. But, doing so is optional and for the sake of this blog, I’m going to be discussing Shadow of the Dragon Queen only.

When it comes to D&D books, this one is a little different than most. For years, fans have been begging for a fifth edition version of the Dragonlance setting. This book finally delivers that, but only partially. What we’re given with this product is a handful of official rules for Dragonlance specific races, backgrounds, classes, and mythology. We’re also provided with a brief introduction to the gameworld. But that’s about as far as this book goes when it comes to being a campaign setting. Make no mistake, this is no gazetteer. Instead, the first few chapters of the book serve only to provide background information to allow DMs and players to be familiar enough with the setting to run the adventure that makes up the remainder of the pages. You see, this book is combination of both a campaign setting and an adventure. That’s something we’ve seen before, in a way. Several other recent campaign books have contained both setting materials and adventure content. But usually, the focus has been on providing information for the setting with a small quick adventure tacked on as a bonus. This book does the exact opposite. Only the first chapter contains campaign setting details, the rest of the book is nothing but a massive adventure.

As far as the first part of the book goes, I found the player options to be well done. There’s really only one new race that’s detailed, the Kender. The other racial options are swept to the side and matched up to existing playable sub-races. The same can be said when it comes to classes. The only really new option is the Lunar Sorcerer subclass – a magic user that ties their power to the waxing and waning of the moon. Other Dragonlance favorites like The Knights of Solamnia, and the Mages of High Sorcery are given background treatments. But honestly, considering how 5E is set up, that’s not really a big surprise.

The adventure is designed to take players from level 1-10 – that’s quite a range! With this in mind, it’s immediately obvious that this is no ordinary adventure. It’s a full campaign event. In fact, the way this adventure is designed is quite unlike any other I’ve seen yet. For starters, the introduction provides a number of “preludes”, these are short 1-2 players encounters that help introduce players to the world of Krynn and help set up the adventure that’s about to come. From here, if you own the Warriors of Krynn board game, you’re invited to play the first scenario from that game and it will actually connect quite nicely with the adventure as a whole.

From this point forward, the adventure plays out in ways that most DMs have seen before. One interesting aspect is that the majority of the module takes place as a massive war in unfolding around the players. I found this scenario to be somewhat unique compared to many of the other adventures WotC has produced over the years. It’s actually quite fitting for Dragonlance. But in the end, I do worry that Dragonlance fans are going to be expecting a lot of the classic content that made the world so popular. Let’s be clear about that. This is not a reproduction of the classic 1E Dragonlance modules. You won’t be seeing many familiar faces here.

As always, the back of the book features new magic items and a small bestiary – most of the classic Dragonlance monsters are represented. I was pleased with what was included.

In the end, I found this book to be an acceptable 5E introduction to the world of Kyrnn. Players and DMs need to know that this is not classic Dragonlance, but rather a whole new look at the world that fans have come to love over the decades. That being said, it’s a very wide look at the world. If you’re looking for more detail, you’ll need to turn to third-party or fan published supplements. Still, it’s nice to finally have an something official from WotC.