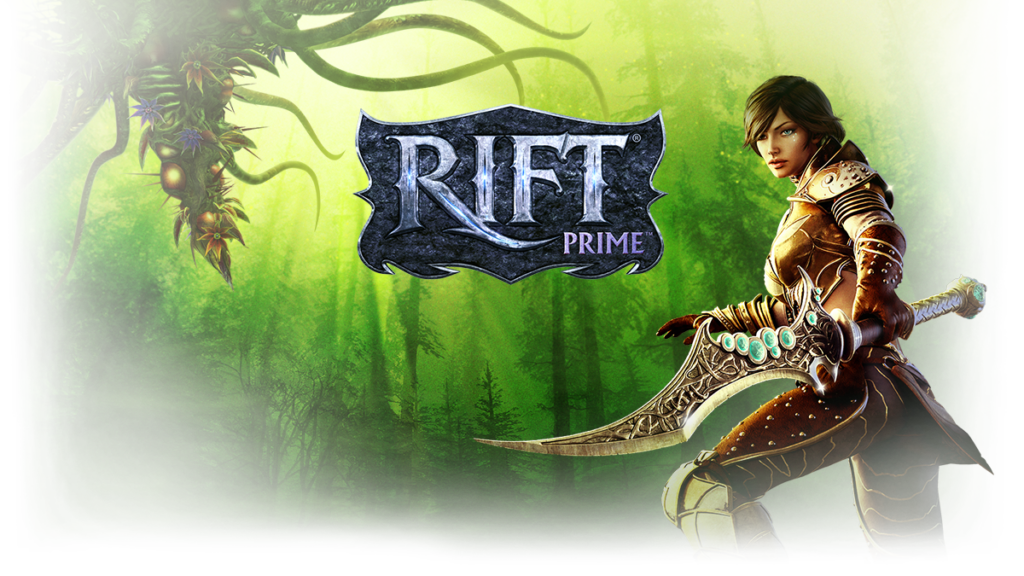 RIFT Prime is here! As previously mentioned on this site, Trion Worlds has launched a vanilla/progression server for their Free-to-Play MMO RIFT. Having played the original game at launch, I decided to check out this experimental server to see if I could recapture the magic that I felt during the game’s release. I’ve now spent a whole week on the Vigil server and I’m here to share my initial thoughts.

First, let’s talk a bit about what exactly RIFT Prime is. RIFT Prime is a special “progression” version of RIFT. This version of the game is restricted to a single server. Unlike the main game, which is Free-to-Play, Prime requires a subscription. (Just like the original version of RIFT did). For the most part, the content in Prime will mirror that of the vanilla version of RIFT. However, some quality of life improvements from the current game will carry over. The RIFT Prime server is expected to last for approximately a year before characters created there are transitioned to the main game. As time goes on, content from RIFT’s version updates and expansions will be added, but at an accelerated rate. The idea is, to allow players to start fresh and be fully caught up with the live version of RIFT by the end of the Prime server’s lifespan. It is currently unclear if Trion will enable the special World Event content that followed RIFT’s original patches and version updates on the Prime server. We shall see. 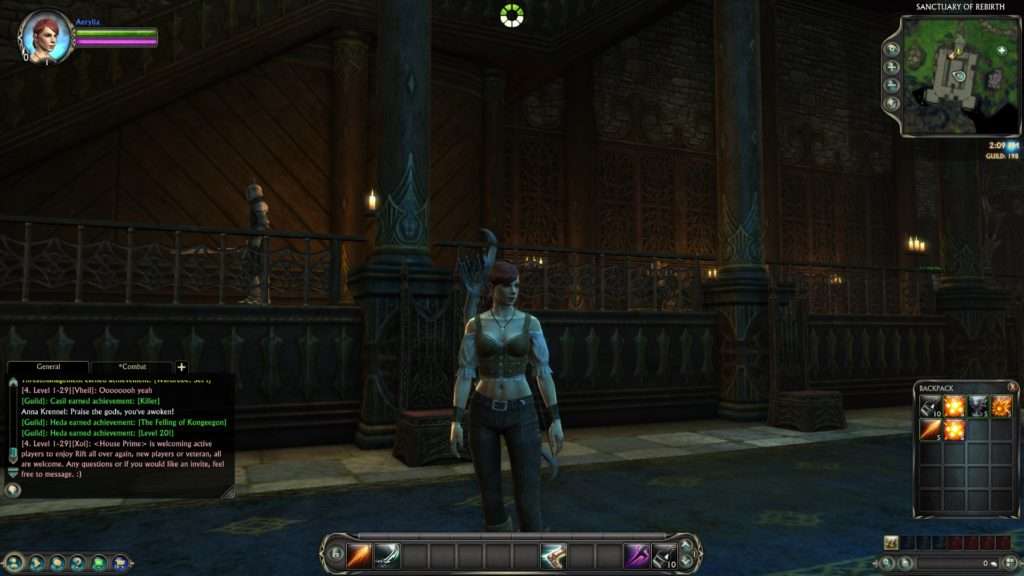 It’s been quite a while since I’ve played RIFT. I noticed right away that the game is now downloaded through Trion’s GLYPH launcher. Downloading GLYPH and installing the game proved to be no trouble whatsoever. However, as expected there was a considerable queue to actually log into the game on day one. Thankfully, this tapered off after the first few days.

Being back in RIFT and seeing it just like I remember was a bit of a surreal experience.  With the exception of some UI changes and being automatically placed in a “starter guild”, almost everything was just like it was the first time around. Sadly, one notable exception to this is the maturity level of the public chat channel. Trolling and outright trash-talking are unfortunately all too common in MMO games. But they tend to not be as bad when content is stuck behind a pay wall. I was shocked at the number of obvious trolls and the immaturity level of the public chat once I emerged from the starting area. It was just as bad as anything you’d find on a free-to-play game.

Social complaints aside, my biggest gripe thus far with the game has been the handling of previous purchases. For the sake of this progression server, Trion Worlds has locked existing players out from their previous account-wide purchases. Meaning, if you have any RIFT Store or Collectors Edition mounts, pets, costumes, etc on your account – they are not accessible in RIFT Prime. I don’t have a problem with this move, in itself. But, what Trion has done is made many some of the old CE mounts and pets available for sale on RIFT Prime store. Now, if the idea behind this is simply to allow new players starting in Prime a way to add these vanity items to their collection, that’s fine with me. But, if it is being done as a way to tempt existing players to spend real money on loot that they’ve actually already bought… that’s a problem. Already I’ve talked to several players who already own the Ancient Tartagon mount on their main account and are planning on shelling out real money to buy the same mount again. Why? 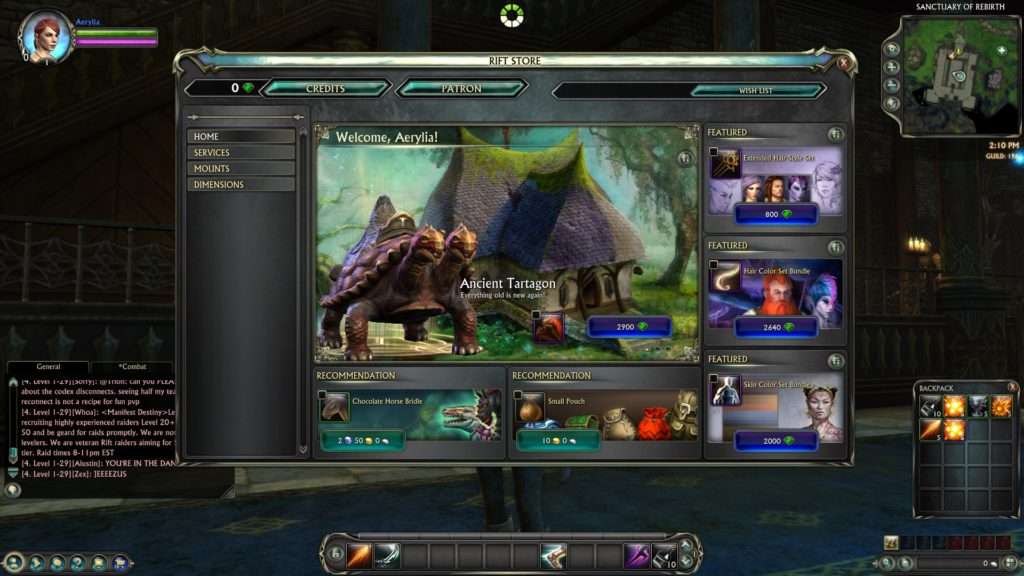 The problem is compounded by the fact that Trion has not been very transparent about what exactly is going to happen when RIFT Prime ends. At that time, when our Prime characters are moved over to RIFT Live, will our old account-wide purchases than be unlocked? If so, it’s a bit of a non-issue. But still, why not be clear about this up front?

The one good thing about this Prime version of RIFT is that there is no Pay-to-Win items available in the store. Everything for sale on the Prime Store is either vanity or account related. This is a move that I approve of. I sank enough money into RIFT back in the day before it went Free-to-Play that I don’t really plan on spending a lot, if any, in the Prime store. So far, the only purchase I’ve made was the Progenitor Pack. This optional purchase grants you a total of sixty days subscription time, a special mount, vanity cloak, title, and portrait frame. If you plan on paying the subscription for a few months, this pack pays for itself.

As far the game itself goes, I’ve actually had a blast playing through all of the early content and quests. RIFT is a faction-based MMO. This means that all players are split into one of two factions. These two teams compete against each other for control of the gameworld. In the Live version of RIFT, I always played as a Defiant. So, for this outing I decided to go with the Guardian faction. There’s just something about the aesthetics of the Guardian starting areas that I enjoy. They have a more “fantasy” feel to them and they are lovely to look at. 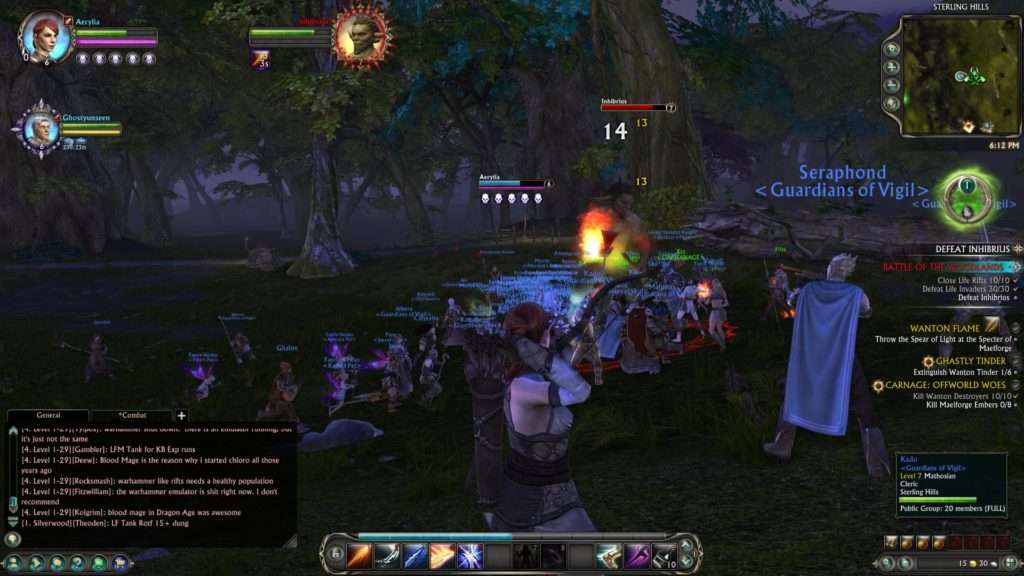 The first few days of RIFT Prime saw a slew of activity in these areas. Rifts were being taken down in record time, as were zone events and elite monsters. It felt very nostalgic to see so many players actually “playing the game” in these locations. Flash forward to a week later, and the population has already evened out a bit. But, there’s still more than enough players around to get things done.

Due to time constraints and having to multi-task between various games, it took me a little over a week to reach the Guardian capital. This city serves as the central hub for pretty much the rest of the game. I’m unsure at what pace Trion plans on adding new content to Prime. But I’ll be sure to provide updates at the “progression” continues.