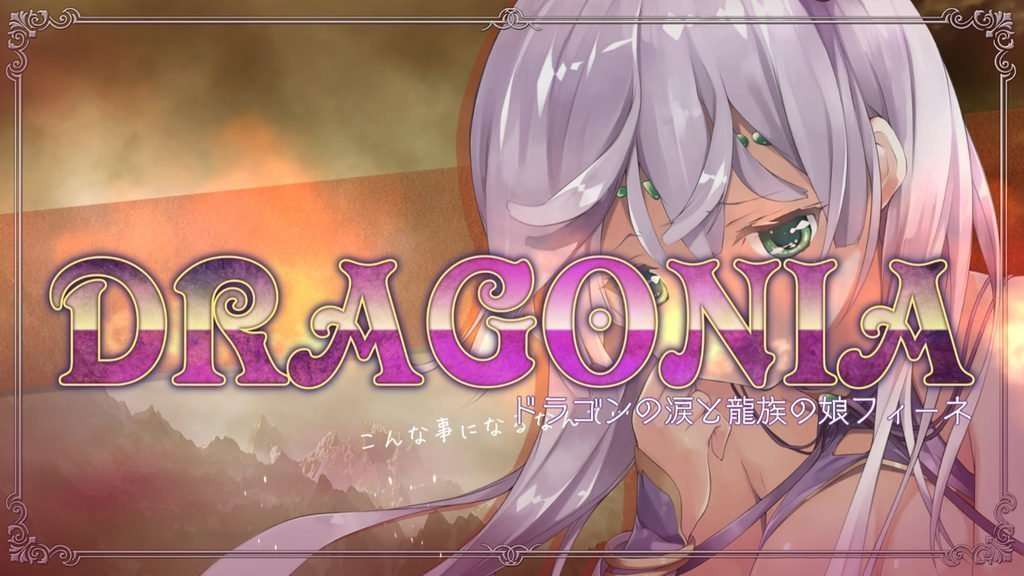 It is with both shame and amusement that I type this review… As it is my ritual every summer in the weeks leading up to the Steam Summer Sale, I always take a moment to browse through the store looking for games that interest me. When I find one, I will add it my wishlist to ensure that I receive a notification if it goes on sale. This year, while perusing the store I came upon an interesting trend – I found a number of anime style games, of various types that were selling for $1.50 or less. Due to the extremely low price, I snatched up as many of them as I could. One of them happened to be an anime-style shoot-em-up by the name of Dragonia. After scrolling through the store page for the game, it quickly became obvious that this was an adult title. But, the game play looked interesting and the reviews were great so I bit the bullet.

Now, even knowing that the game contained some adult themes, I had NO IDEA what I had got myself into… to say this is a “mature” game is an understatement. This game is downright pornographic. On top of that, there’s even an “uncensoring patch” available directly from the developer, just in case you need absolutely nothing left to the imagination. In fact, I debated even reviewing this game at all, considering the content. But, as you will see, it’s actually a somewhat intriguing title. So much so, I decided to review it regardless of it’s extremely adult nature.

Let me take a moment to explain what this game actually is. First off, in it’s heart and soul, Dragonia is a bullet-hell schmup. You play the character of Feeney, a half-human, half dragon. Feeney is summoned by an old witch to help purge the land from the grip of several Evil Dragons. As it turns out, only Feeney has the ability to defeat and “purify” these dragons. As might be able to guess, to “purify” them, Feeney has to resort to her… seductive skills and… well… you can guess the rest.

The basic storyline outlined above is easy enough to decipher. However, that’s about all you’re going to get out of the storyline text in the game. The English translation in this game can only be described as horrendous. It seems to literally be a copy paste from Chinese to English via Google Translate… Which in some ways is actually a godsend, because the text likes to describe in detail every single thing Feeney has to do to “purify” her enemies.

All of the adult material in the game is limited to the cutscenes that play before and after each game level. The gameplay itself is pretty much family friendly. You control Feeney from a birds-eye-view as she flies around and blasts her opponents from the air.  Enemies approach from every angle. It’s a classic bullet-hell scenario.

As you play through each level, Feeney will collect “souls”. In between stages, souls can be exchanged for a variety of things. You can unlock new modes of attack, you can increase your damage level, health, etc.  So in some ways, this game has a very RPG-like progression element to it.  You complete a level by defeating a certain number of enemies. Once you reach this number, the level boss is spawned. Defeating the boss allows you to proceed to the next area.  At first, the game levels are fairly simple but eventually you will come across a boss that you just can’t take down. This is where you’ll want to grind up some more health of damage output. Some bosses are weak to certain attacks (lightning, fire, etc). So unlocking specific attack modes is also part of the strategy. 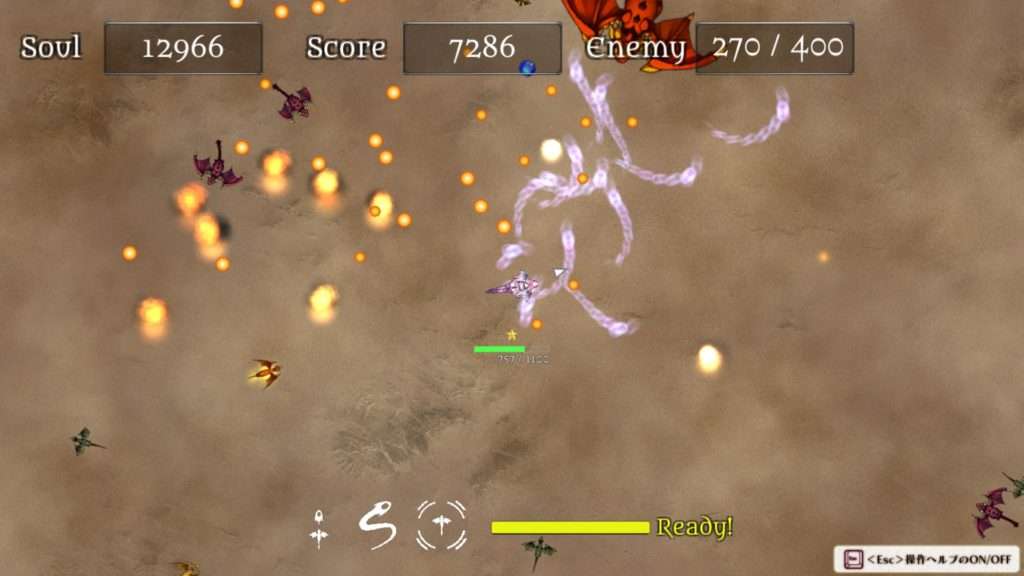 In this way, despite the extremely high levels of fan-service, the game actually has some redeeming value to it.  I personally found the gameplay to be engaging and overall very well done. There’s no shortage of upgrades to unlock. So, this game gets quite a few things right. It’s hard to argue that the gameplay itself is bad. And, depending on your viewpoint, the cutscenes are either going to be a big plus or a big turn off.

The down points to this title are without a doubt the terrible localization and the UI/playcontol. The in-game menus look like they were designed by rank amateurs. There’s no logic to them at all. But with a little diligence, you’ll be able to figure out their quirks and limp through the UI. The game itself can be played using a keyboard, but I don’t recommend this. These types of game just work best with a controller. Personally, I played Dragonia using my trusty USB Xbox 360 controller.  Even on a controller, the control-scheme makes little sense. But, it is accurate and responsive. Normally, these types of complaints would be a BIG DEAL, because when I say they are bad, I mean they are really REALLY terrible. But, when the game sells for $1.50, it’s very difficult to complain. Especially for all of the content you actually get with that $1.50. Dragonia is a short game, but it’s longer than others that I’ve paid premium prices for. 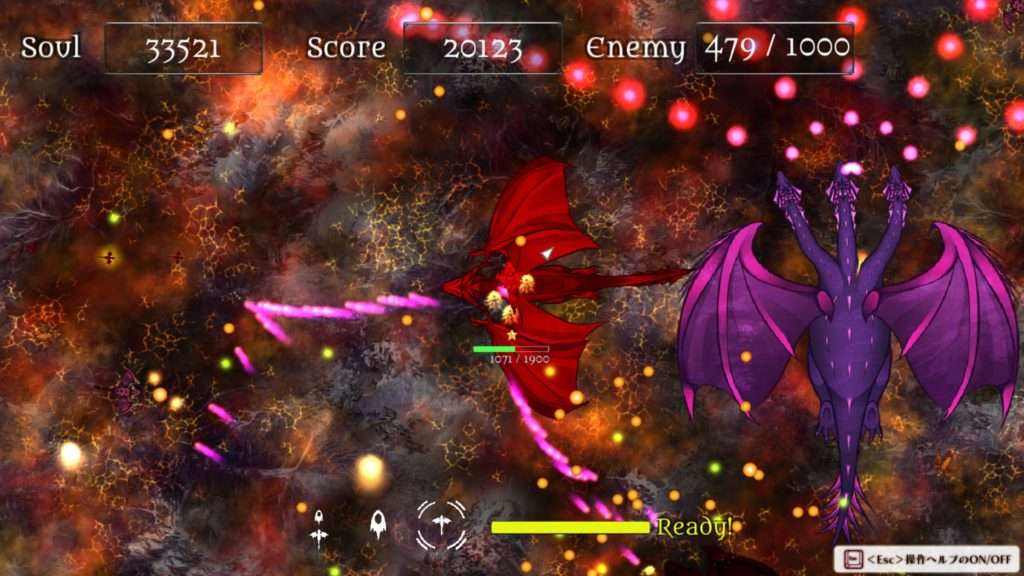 Difficulty: Easy–  This game is a curious case in terms of difficulty simply because as a schmup, it is exactly what you’d expect: bullets flying everywhere, endless enemies pouring from all sides, etc. Each level gets harder and harder. But, as mentioned in the main review, you can upgrade your life meter and even the damage that you deal. So, if you find yourself stuck on a particular level, the only thing you really need to do is be patient and grind until you are overpowered enough to blast your way through whatever roadblock you encountered. This mechanic actually renders most of the challenges in the game meaningless.

Story: If we’re being honest, the storyline for this game is nothing more then a vehicle to deliver some heavy doses of fanservice. In fact, I have a sneaking suspicion that the game itself was developed separately from the dirty cutscenes and the two were cobbled together into the game that we see now. The in-game story is shallow and weird. But, admittedly mildly interesting. The translation is barely comprehendible.

Soundtrack: The game has a somewhat catchy soundtrack. But the sound effects can be a bit annoying at times. One weapon in particular sounds like high volume static. It is quite annoying. Overall, the audio in this title is pretty poor and unimaginative.

Graphics:  The cutscenes are colorful, crisp and well rendered. Fans of anime-style art will be pleased. The game itself is actually quite-well rendered as well. The bullet effects are colorful and dynamic. Sadly, the UI is crudely chopped together and messy.


Playcontrol:  No matter what method you use, the playcontrol is rough and very non-intuitive. Playing with a controller is manageable, but it still just feels off.


Value:  Despite the many negative things about this game, it’s hard to argue with the price. Someone paying a little over a dollar for a game shouldn’t expect much. Considering the paltry cost for this title, you are getting your money’s worth ten times over.  Often, many adult-content games actually come with a premium price tag. It’s hard to go wrong here from a value standpoint.

Overall score (1-100): 45 – Content aside, a lot of aspects about this game are well done and interesting. There’s quite a bit of content for a very small price. On the other side of the coin, the game suffers from bad localization, terrible UI and playcontrol. It’s an interesting but largely mediocre title, but one that will appeal to certain gamers.