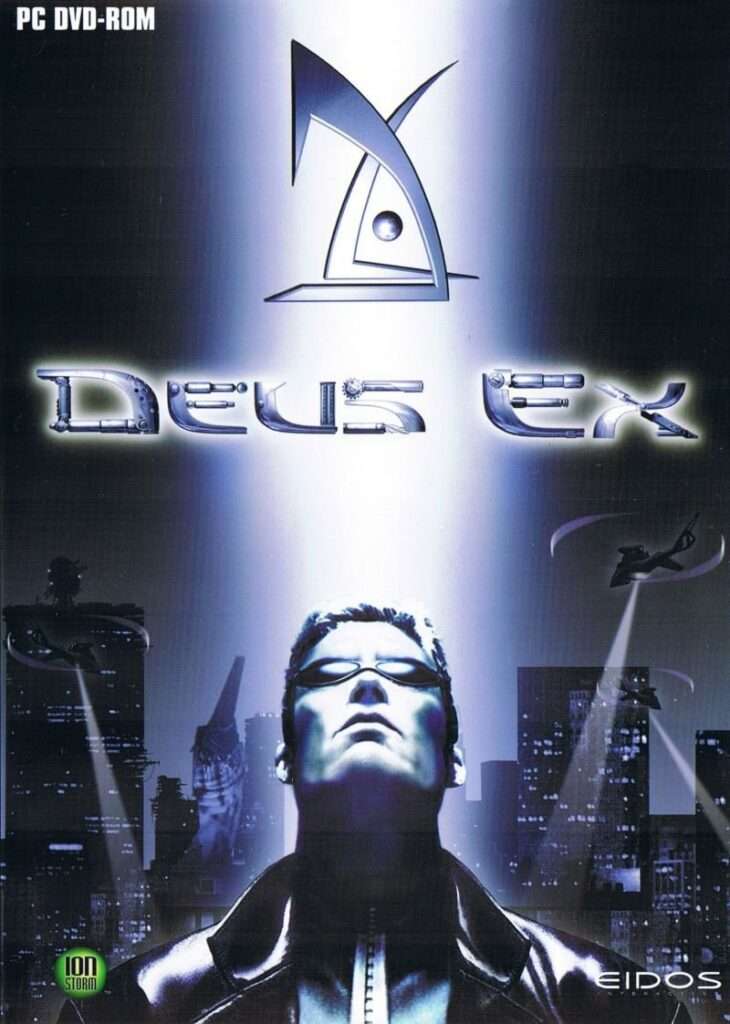 This is a review that has been a long time coming. In reality, I should have discussed this game quite some time ago. Deus Ex was released in 2000, before some of the other titles I’ve already featured on this site. But, as I wrap up my turn-of-the-century playthroughs, I find myself filling in some of the gaps in my backlog that I missed the first time around. This game is a fine example of that. Deus Ex is one of those PC titles that always appears on the “greatest games of all time” lists, and with good reason. This game is so good it’s ridiculous. On the surface, it appears to be just another first-person shooter, but in reality it is so much more than that. While presented in the first-person, Deus Ex also incorporates RPG and stealth elements. It manages to successfully merge these different styles in a way that’s rarely done successfully. For this reason, it cemented itself as a classic in hearts and minds of many gamers, myself included.

Before I get into the meat of the game, I want to take a moment to discuss some technical details. Deus Ex is built with a modified version of the original Unreal-Engine. This means that it is generally compatible with today’s PCs, but lacks some of the modern conveniences such as widescreen support and higher resolutions. To resolve this, players have a couple of options. (All unofficial fixes) First, for purists, there’s “Kentie’s Launcher“. This is a replacement executable that offers higher resolutions and FOV fixes without changing any of the original textures or artwork. (This is what I used for my playthrough/screenshots). The second option is “GMDX” which is actually more of a total-conversion mod than a simple fix. This mod upgrades the game’s graphics and mechanics resulting in a much more modern and polished experience, without detracting from the intended feel of the game’s developers. In all honestly, the GMDX mod is probably what I would recommend to most players who are just trying Deus Ex for the first time, as long as they don’t mind playing the game with fan-sourced textures. 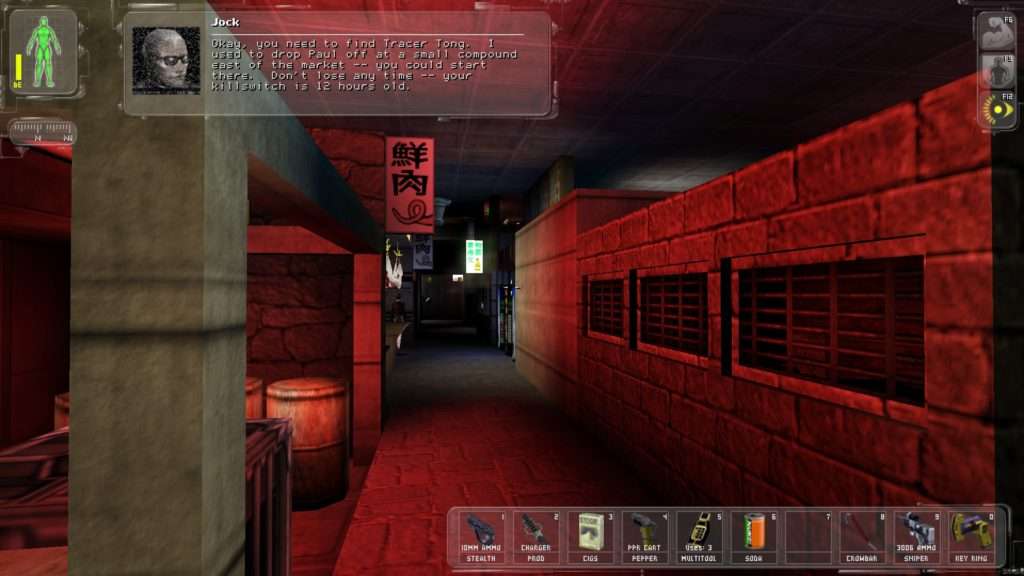 The story of Deus Ex is an interesting mixture of both political intrigue and science fiction. The game takes place in a futuristic setting where society is on a downward spiral fueled by terrorist attacks, a world-wide plague, and political turmoil. As a result, most of the world is now under the control of a division of the United Nations called UNATCO (United Nations Anti-Terrorist Coalition). In Deus Ex, players control the character of JC Denton, a recent UNATCO recruit. Denton is an experimental agent who has been physically enhanced with various cybernetic implants. For his first mission, Denton is tasked with resolving a terrorist occupation at New York’s Liberty Island. It is there that he learns the true motive behind the terrorist’s activities, and it starts him down a path that will ultimately force him to decide where his loyalties lie.

The creators of Deus Ex mix some of the best late-90’s sci-fi concepts with nearly every crypto/conspiracy theory you can think of, resulting in a compelling and thrilling story. Throughout the course of the game, players will be taken from the streets of Hell’s Kitchen NYC and the Hong Kong underworld to the catacombs of Paris and beyond. At several points in the game, players will be faced with various decisions that will impact the storyline of the game itself. This adds a level of replayability that makes Deus Ex a game that players can enjoy over and over again. 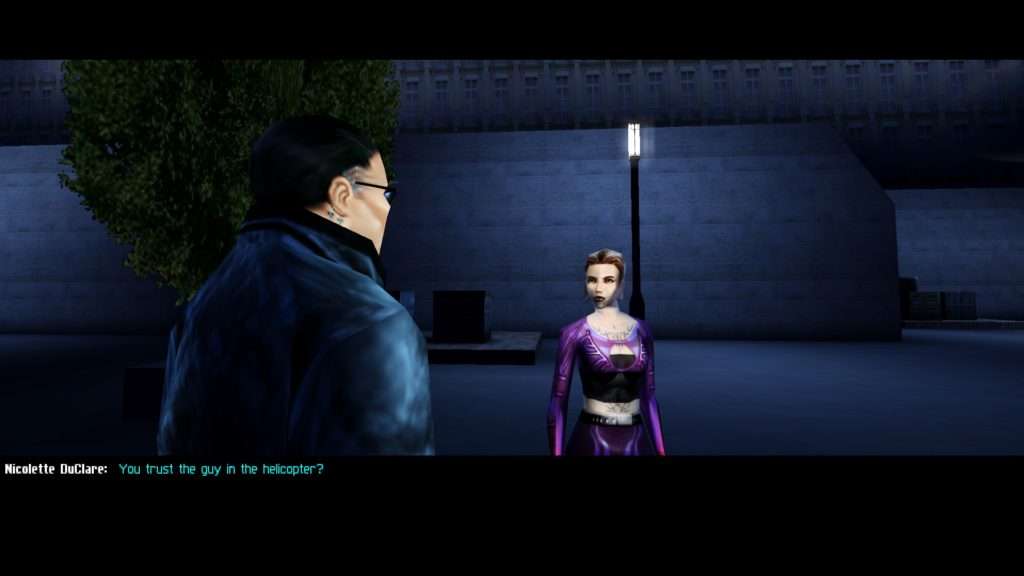 Excellent story aside, the big secret to Deus Ex‘s success is in the game design itself. Despite looking like just another shooter, players can determine exactly how they want to control their character. Yes, Denton can end up blowing through his enemies like a guns blazing “Rambo”, but more often it’s better to be more subtle. Players can sneak around in shadows and try to avoid enemies entirely. Instead of obtaining keys from the bodies of slain soldiers, they can instead pick locks and hack computer terminals, allowing them to infiltrate enemy territory and continue with their mission. As you progress through the game and complete objectives, you are awarded skill points than can be spent on increasing certain abilities. For example, when it comes to combat, you can choose to master light weapons or explosives as opposed to rifles and hand guns. This system allows players to create a character that matches with the style of play they want to experience.

While the main focus of Deus Ex is the single player story, multiplayer capabilities were added to the game shortly after its release. However, these days, players who wish to experience online play will have quite a bit of work cut out for them. Initially, the multiplayer browser found in the game served as a front-end for the now defunct Gamespy service. Since Gamespy no longer exists, players will need to either enjoy multiplayer on a LAN or edit the game’s configuration files to allow for play using other third-party services (such as Master Server), but even then active matches can be hard to come by.

In the end, the Deus Ex experience is truly a work of art. It is a title that every PC gamer should have in their library. It was released at a time in the industry when the focus was shifting from single player to online experiences. In a way, its release marks the end of a era in PC gaming. 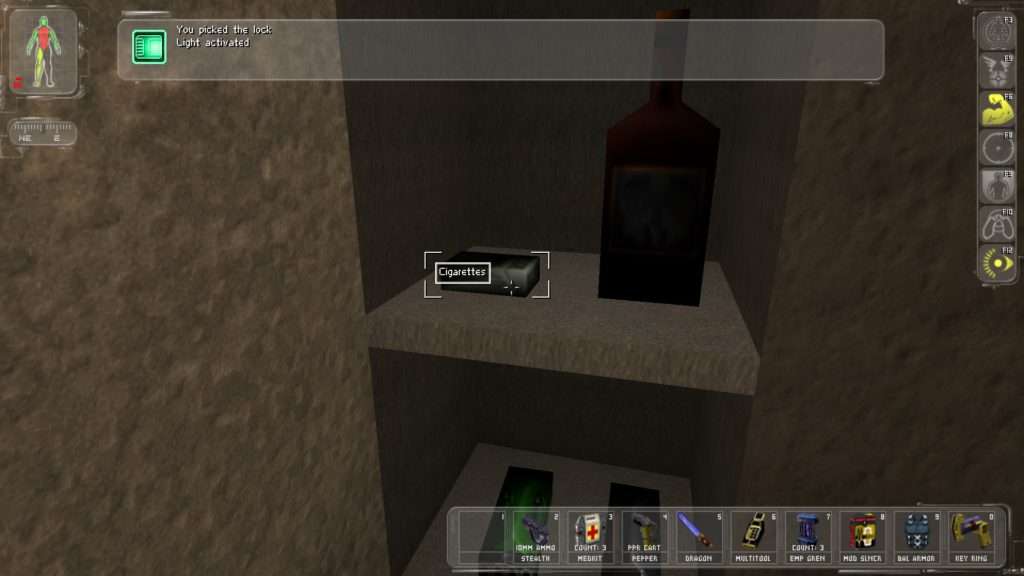 Difficulty: Variable –  Deus Ex offers several difficulty options. However, even at the easiest setting, the game can be brutal at times. Players would be wise to save their game often and try to “out-think” the problem in front them. Often times when confronted with what seems like a hopeless scenario, players can find a solution by approaching their goal from a completely different angle. This is just one of the many things that makes this game shine.

Story: You’d be hard pressed to find a better and more in-depth storyline in a PC title at the time Deus Ex was released. This game ranks right up there with Fallout and Max Payne in terms of compelling storytelling. The plot is certainly one of the best aspects of this game.

Originality: In a time when first-person shooters were a dime a dozen, Deus Ex flipped the script by adding stealth mechanics and RPG elements. Sure, stealth-based first-person games like Thief has already seen the light of day, but Deus Ex allowed players to choose what style of play was suited for them. This brought a dynamic that had never really been seen before.

Soundtrack: Filled with futuristic tunes and funky Asian-flaired hip-hop, Deus Ex features a catchy soundtrack that fits the game perfectly. The game also boasts voice acting that was above-average at the time.

Fun: At first, this game can seems a bit overwhelming. But once I managed to sink my teeth into it, I found myself having a complete blast. This is a game that I enjoyed immensely at the time it was released. Playing through it now, I found that it still managed to capture my attention just like it did back in the day.

Graphics: By today’s standards, Deus Ex will appear a bit dated. Of course, at the time it was released it was top-of-the-line. Modern players can improve the visuals using third party mods and patches.


Value:  At the time of this writing, the Game of the Year edition of Deus Ex tends to sell for around $7.00. At this price, the game is certainly worth every penny. It is not uncommon to see the game for sale as low as $1.00 during Steam sales.

Overall score (1-100): 100 – Deus Ex stands as a high watermark for classic PC gaming. It’s difficult to fully describe just how great this game is without sounding like a fanboy. But it really is that good. This is one of those rare games that reaches across multiple genres and appeals to nearly everyone. If you consider yourself to be a PC gamer, you owe it yourself to experience this game at least once.