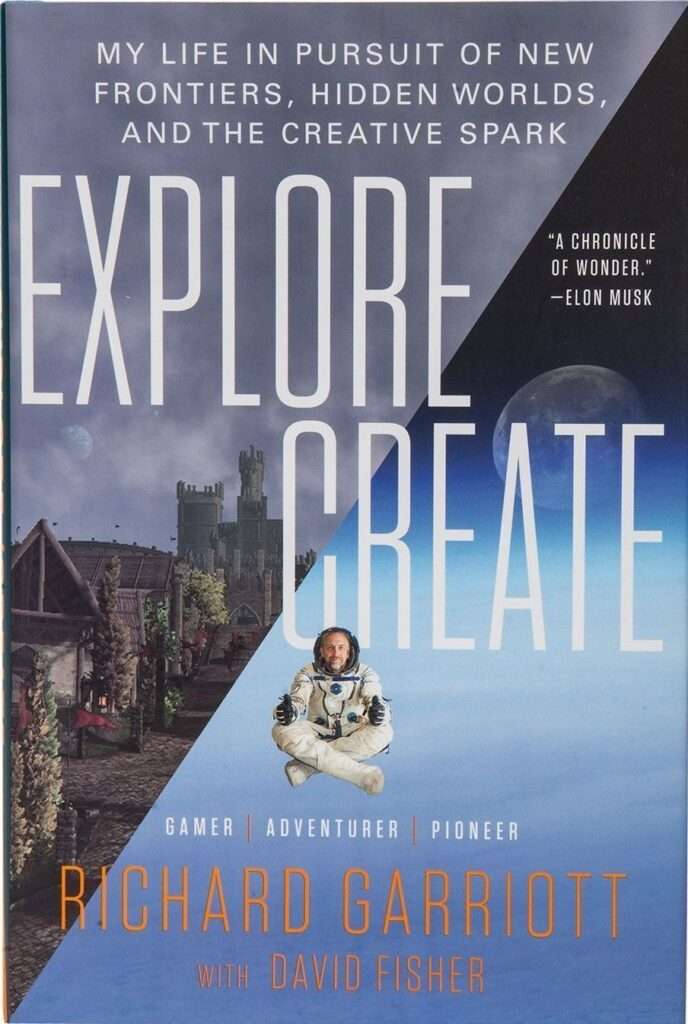 It’s been a little while since I posted a book review that wasn’t Star Wars related. In fact, I think my last one was a review of Stephen King’s Carrie back in November of last year. So, this time I wanted to change things up a bit and discuss an autobiography that I finished a few months ago: Explore/Create by Richard Garriott.

Richard Garriott is an American video game developer and entrepreneur. He is best known as the creator of the legendary Ultima games, a series of classic RPGs for the personal computer. He is also lesser known for being a private astronaut and all-around adventurer.

Even though I’ve not really discussed it on this site before, I’ve been a lifelong fan of the Ultima series. In fact, starting next month, I plan to spend a little time reviewing the series in full before jumping back into my regular backlog reviews. As a die-hard Ultima fan, I was shocked to discover that I had overlooked the fact that Garriott had authored a novel about his life and career. Somehow, I had missed the news that this book even existed. No sooner did I learn about it, I snapped up a digital copy and fired it up on my Kindle.

As far as autobiographies go, this book is a little odd. First, it focuses on two different aspects of Garriott’s life, his love of exploration and of artistic creation (hence the name of the novel “Explore/Create“). Each chapter is designated with one of those two labels. Chapters tagged as “Explore” focus on Richard Garriott’s real life adventures and amateur scientific excursions. For example, his experiences on the International Space Station, or his trips to Antarctica. Chapters labeled with the “Create” tag, are more geared towards stories about his game developments days.

With this in mind, readers who are only interested in Garriott’s career can skip any of the “Explore” chapters and just get right into the meat of what interests them the most. For me, I did read the entire book of course, but I personally took a greater interest in the stories and anecdotes regarding his work on Ultima and his career at Origin. I found some of his “Explore” adventures to be interesting, but often a bit braggadocios. Richard Garriott strikes me as the type of guy who enjoys his wealth and doesn’t mind flashing his status around. Which, is OK, I suppose. But it comes off as a little silly in print.

I believe all of the stories presented in the book are factual. I don’t think Garriott is spinning any tall tales here. But admittedly, some of them are presented in a very over-the-top fashion. For example, there’s a section early on in the book where he details an event involving a prowler on his property. The whole encounter actually ended with Mr. Garriott holding the trespasser at gunpoint while he waited for the Police to arrive. That is interesting enough on its own, but the way Garriott portrays it is just a little much… I believe the quote was something to the effect of “So then, I grabbed an Uzi and made my way up stairs!” I audibly snorted when I read the line.

I suppose such a grandiose presentation and having a bit of an ego comes with the territory. The man has certainly earned his lifestyle. And despite coming across as a bit of a blowhard, he seems to be a nice person. I’ve had a few dealings with him on Twitter over the years, we’ve sparred on political topics, etc – but despite our difference of opinion, Richard Garriott has always been civil and respectful. That’s more than I can say for some people.

In summary, this is a book that will appeal most to old school gamers, science nerds, and techies. There’s very little here that might inspire the average person to want to thumb through these pages. Once you crack the cover, the book itself is well done, but again, it is certainly not going to appeal to everyone.

Story: Interesting and insightful. It comes off as pretentious at times. By his own admission, Richard Garriott sometimes sounds like a privileged rich kid who lucked out and landed the career of his dreams. However, he also manages to be self critical and humble when appropriate. For those interested, this book provides lots of insider info on the indie game scene of the early 80s – interesting stuff.