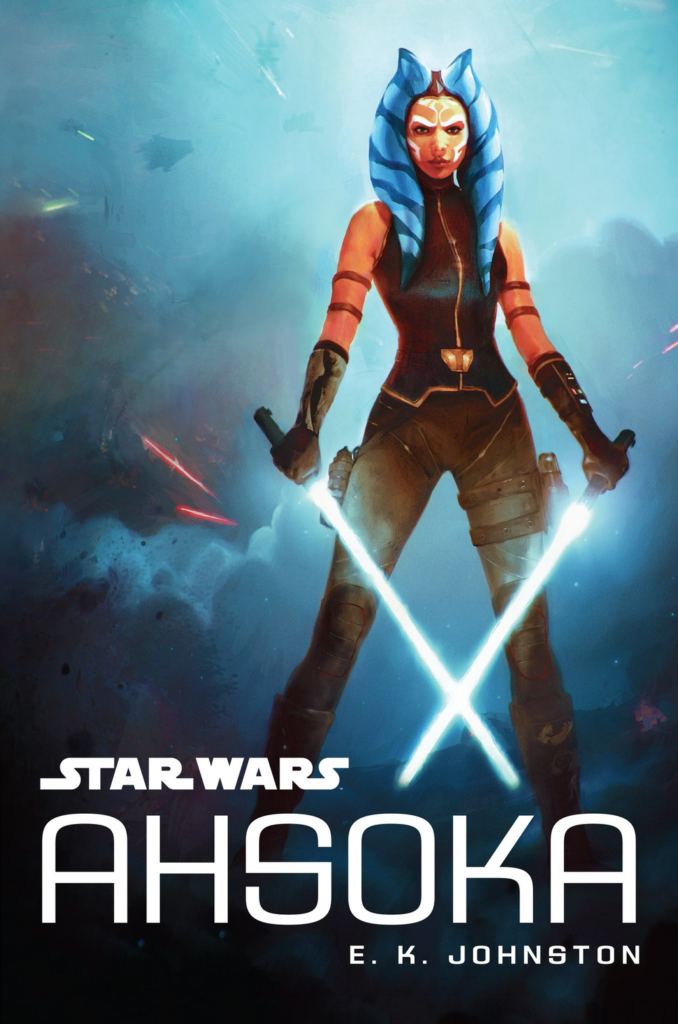 I know… It’s been a while since I’ve reviewed a Star Wars novel and I’m actually accumulating quite a backlog. But, as per my October tradition, my family always takes a vacation during Fall Break and that gives me plenty of off-the-grid time to catch up on reading. This time, I managed to read a few different books! So expect some book reviews in the coming days.  While I was away, the fourth season of Star Wars Rebels premiered. With that in mind, I felt like this would be the perfect time to read and review one of my neglected novels: Ahsoka.

For casual fans, the character of Ahsoka may not gin up a lot of excitement. After all, the character debuted in the dismal Star Wars Clone Wars animated movie. (That alone is a death sentence for her in the mind of many fans). In that film, she was introduced as a young Padawan assigned to Anakin Skywalker. The character carried over to the Clone Wars animated series. It was there that the character of Ashsoka matured and really developed into a fan favorite. If you’re not one of the fans that gave the Clone Wars series a chance, it may be hard to imagine just how the annoying little girl from the animated film turned out to be one of the coolest characters in the Star Wars universe, but trust me. It happened.  It was for this reason, that fan’s rejoiced when Ahsoka was eventually unveiled as a key figure in the formation of the early rebellion in the Star Wars Rebels animated series.

In fact, this book actually fills in the gap between those two animated series. The story found in Ahsoka tells the tale of Ahsoka Tano after the events of Episode III, leading right into the events of Star Wars Rebels – and it’s masterfully done.

This book is a junior novel. Meaning, it was written for younger readers. For this reason, it won’t appear on the official time in the front cover of your latest adult Star Wars novel. But, the contents of the book are canon and just because it is aimed at younger readers doesn’t mean that it’s a book for children. Both the subject matter and the writing are just as good as any adult science fiction novel you will come across. The main difference being, it’s a short read. It’s about half the size of a standard novel.

Until this book, I’ve always been somewhat indifferent to the character of Ahsoka. I wasn’t a fan at first, but over the course of the Clone Wars television series, she started to grow on me. By the time she appeared in Rebels, I had warmed up to the character considerably. But now, after reading this novel, I find myself feeling much more “fanboyish” about the character. It’s really an excellent read. If you’re curious how Ahsoka got her white light sabers or just how she managed to join the rebellion, this book will provide the answers that you seek.

Not only that, but this novel also serves as a soft introduction for the mysterious Inquisitor characters that have also become a fan favorite since their introduction in Star Wars Rebels. In a nutshell, I enjoyed this book much more than I expected to. I truly thought this was going to be one of those reads that I would have to force my way through. But once I cracked it open, I couldn’t put it down. It read through it in under 24 hours. I recommend it.

Story: Surprisingly well done! It covers Ahsoka Tano’s adventures between the Clone Wars and Rebels in a masterful way. This book really does a fine job of detailing the character’s changes between these two crucial eras. The plot is engaging and action driven.