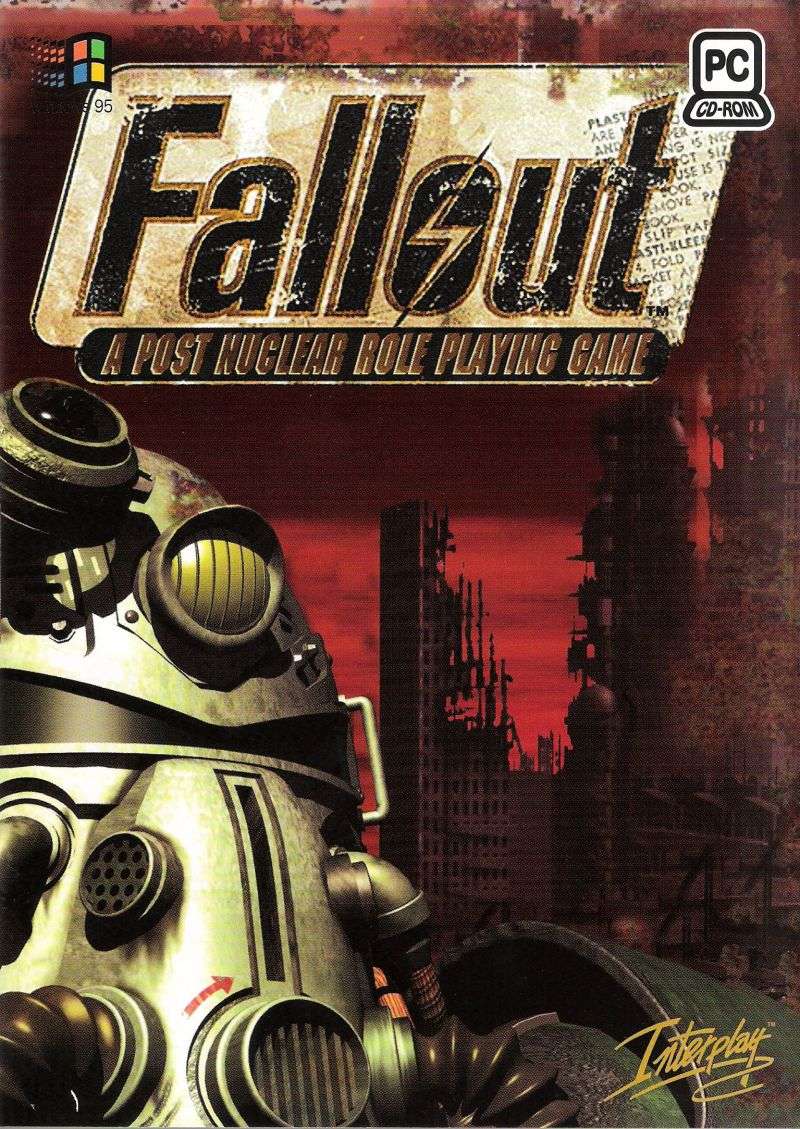 It is with great honor that I can finally declare myself free of one of the gravest sins a “PC Gamer” can commit. That sin is: never playing Fallout. The Fallout series is heralded as a favorite among gamers. But somehow, the original title, and thus the series as a whole, slipped under my radar. Since I’m currently undergoing a play-through of games from late 90’s to early 2000’s, this made for a great opportunity to finally see what all the hype was about.

Fallout was originally released in 1997, a time of transition in the PC gaming industry. First person shooters were on the rise and slowly beginning to dominate the PC gaming landscape, but a few gems like Diablo and Fallout still managed to make a name for themselves by being completely original.

At it’s core, Fallout is an RPG. Not the “JRPG” style game that one normally associates with the phrase these days, but rather it is a Role Playing Game the hearkens back to a genre that is nearly all but extinct.  In many ways, the mechanics of this game reminded me a lot of another classic RPG title from my youth called Realms of Arkania. For example, combat takes place on a grid. Each action that occurs during combat costs “Action Points”, be that moving forward a step, drawing a weapon, etc. Once your action points are used up, your turn is over and it’s time for your opponent or another character to move. This may sound tedious, but it’s actually very clever and can progress at a pretty fast rate once you get the hang of things. But before we talk too much about mechanics, let’s look at the story behind the game itself. 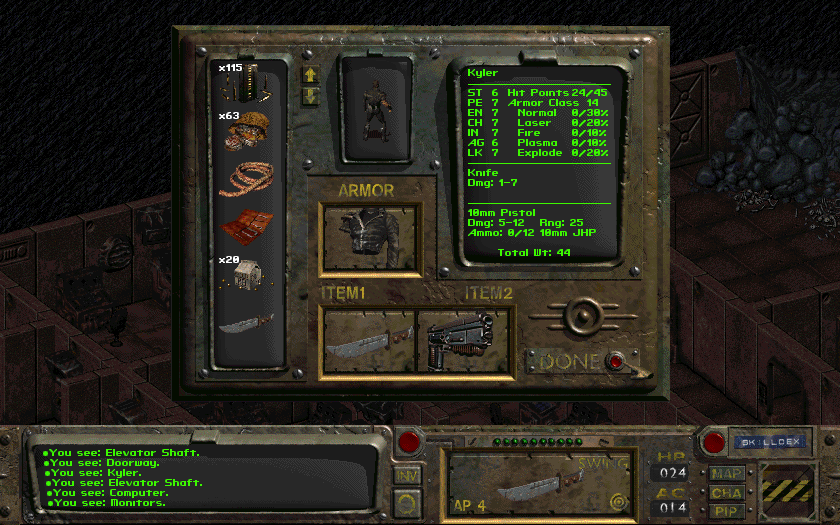 The world of Fallout is essentially Earth in an alternate future. Imagine if you will, that sometime after World War II technology continued to innovate at a rapid pace, but pop culture did not. Then, imagine a worst-case nuclear war scenario actually occurred. Most of human civilization was destroyed, but a small number of people managed to survive by hiding themselves away in deep underground “Vaults”. Some of them still remain hidden from the world outside, while others have ventured out and adapted to the wild lands outside. This is the scenario in which Fallout takes place.

You play a “Vault Dweller” from Vault 13 who is tasked with venturing into the outside world in order to find a “Water Chip” needed to ensure that water supply for your vault can continue production without interruption. During your adventure you quickly learn of the harsh realty that is life outside the vault.

Now keep in mind, I started this game with absolutely no idea what to expect. I make it a habit not to read up too much on games before I play them because I enjoy the element of surprise. As a result, I found myself very confused and somewhat overwhelmed with the UI and game controls. Being an older game, Fallout does not do any hand holding when it comes to actually playing the game. To learn the basics, you actually have to read the manual. If you purchased the game digitally, a PDF copy of the manual is usually provided to you. This is true for Steam. So word to the wise, if you are playing this game for the first time, READ THE MANUAL.

Getting back to the mechanics, the game itself reminds me a great deal of pen and paper RPGS. Fallout features a system called SPECIAL, which essentially represents the core stats of your character. There’s also a large number of numerical skills and traits and other aspects that can all be customized throughout the course of the game. For example, if your plan is to try to avoid conflict whenever possible, you may want to level up your Speech skill over some of the other combat skills. The game can be conquered in a number of ways. How you decide to approach various situations can have a huge impact on how the storyline of the game will pan out. 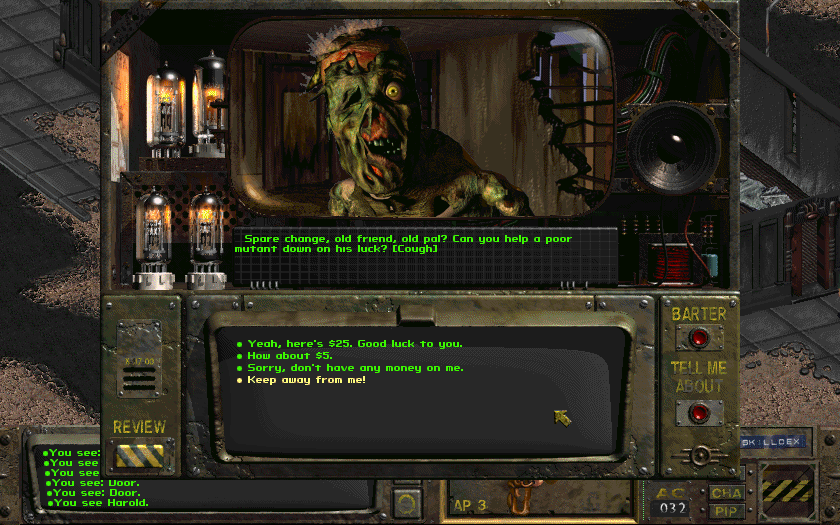 As I mentioned earlier, I was very taken aback at first by the sheer complexity of the game. I think I’ve become accustomed to a lot of hand holding and the generic familiarity that most games tend to provide these days, that I forgot what it was like to dive into something “original”. But after reading the instructions and spending a little time getting my feet wet, I found myself going along at full steam and having a really wonderful time. I’m really curious to see how some of the more modern games in this series stick to the core gameplay of this title and how they deviate.

I don’t usually enjoy post-nuclear type scenarios, either on film, in literature, or in games. But Fallout manages to do a fantastic job of keeping the scenario fresh and interesting. I was pleasantly surprised by this title. It somehow managed to feel both familiar and fresh at the same time. Which is quite impressive considering the game is now nearly twenty years old.

One final note, if you’re playing this game on modern hardware, I do recommend going with the Steam version of the game. This version is update to date with the official patches and also includes the developer approved HD resolution patch. (There are also unofficial patches out there as well the correct even more confirmed bugs and remove some in-game censorship.) 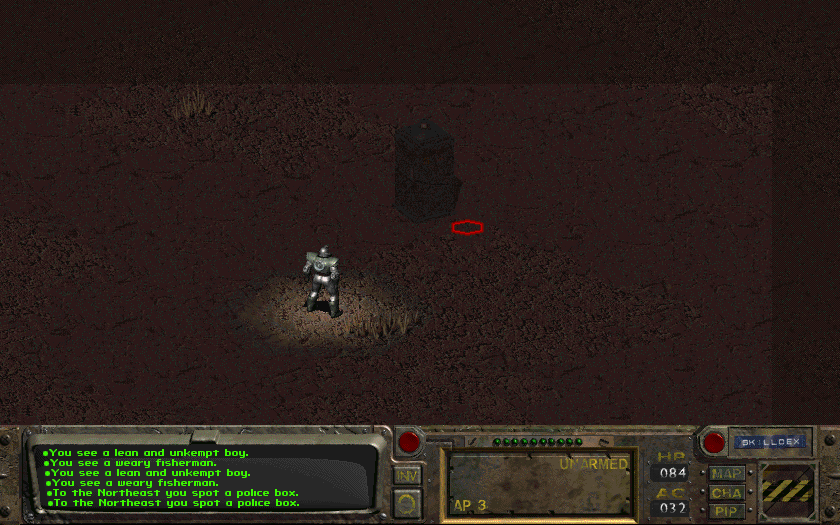 Difficulty: Medium –  If you never played old school PC RPGS, there can be quite a bit of a learning curve here. But, completing the main scenario of the game is not particularly difficult once you understand how Fallout works. There are a number of ways to go about things also. So if one approach doesn’t work for you, there’s usually other options as well. The ability to save the game at anytime and having multiple save slots helps a bunch as well.

Story: When it comes to lore and storytelling, this game is filled to the brim with it. And it all very fleshed out as well. This game is all about story, and it’s fantastic.

Originality: At the time this game was released it was simply ground breaking. Sure, the core RPG mechanics are very similar to what you might find at a GENCON, but being able to capture that feel and put it on the PC screen so perfectly is feat in itself. Despite being an older game, Fallout still managed to feel fresh and new to me upon my first play.

Soundtrack: Most of the in-game score is ambient and mood-setting. Which I found to be appropriate for this kind of title. The real winner here is in the voice acting. The character actors in this game are simply amazing. This is hollywood-grade voice work! Superb.

Fun: As I said before, I was pleasantly surprised with this title. I played through the game in almost thirty hours my first time over the span of about four days. It flew by. After that, I loaded up some of the unofficial patches and explored some of the non-canon content in what was nearly another twenty hours.  I had a blast both times.

Graphics: This is an older game, and it shows. The pixelated graphics certainly giveaway the age of the title. But despite that, it still manages to look pretty darn good thanks to the HD resolution support the Steam and some unofficial patches provide. Fallout was released during that awkward time of crude graphics integrated with CD-quality video. Some of the NPC interactions looks much better than the rest of the game, giving the title a mixed bag sort of feel graphically.


Playcontrol: The controls for this game will feel foreign and awkward to someone who doesn’t take the time to read the game manual. That being said, once you get the hang of things it tends to be quite smooth overall. My biggest complaints with the game have to do with mouse pointer accuracy and viewing angles. I’m looking forward to seeing how some of these issues are dealt with in future entries in the series.


Value:  This game can usually be found today for $10 and under. Considering amount  how replayable it is and the content packed into the game, this is a steal and well worth the price.

Overall score (1-100): 95 – Fallout is without a top notch game that worthy of its legendary reputation. I can’t believe I missed this game the first time around. I’m now a fan.