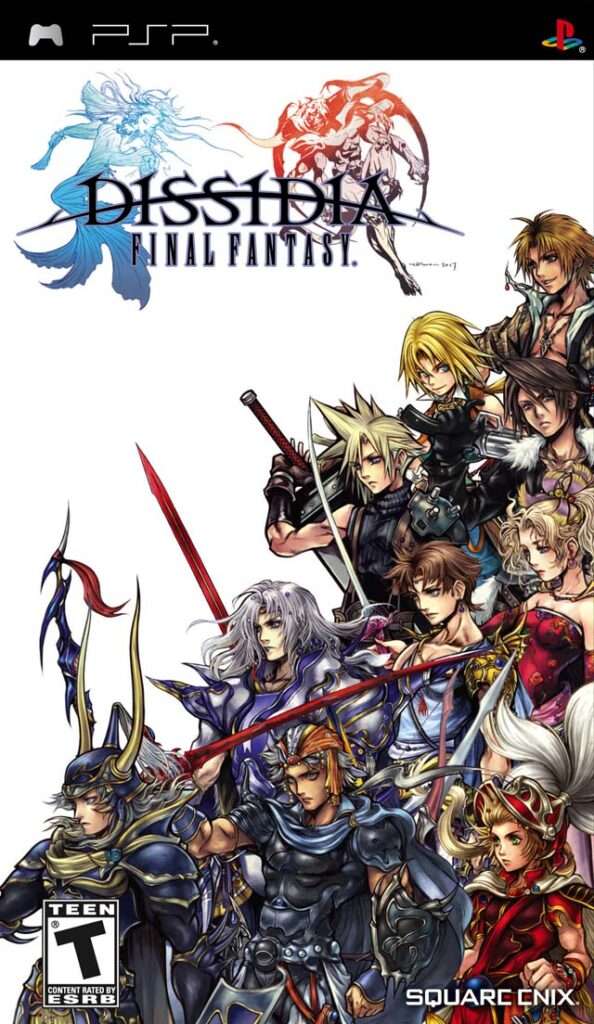 As the upcoming release for Dissidia Final Fantasy NT approaches, I’m taking a moment to veer off of my regular playthrough schedule to take a look back at the original Dissidia titles.  Naturally, I’m starting with Dissidia Final Fantasy which was released for the Playstation Portable in 2009. In case you’re not familiar with the title, I’ll take a second to explain. Dissidia is, at its heart, a fighting/brawler game. It fills its roster using various characters from the Final Fantasy series.  On the surface, it seems like a cheap attempt by Square Enix to cash in on the brawler game craze by simply slapping a Final Fantasy label on a fighting game. But in truth, there’s actually quite a bit of depth to the game itself.

Fighting games are a genre that I’ve never really covered on this site before. So it may seem a bit backwards to start with something like Dissidia, which is a modern 3D brawler. Essentially this means that characters do battle in full three-dimensional areas. They can move north, south, east, west, and up and down. Characters can do battle with their feet on the ground or while soaring though the air. The main goal is to reduce your opponent’s hit points to zero and thus, win the battle. Dissidia is certainly not the first 3D fighting game, but a number of things help it stand apart from other similar titles.  First, being a Final Fantasy game, there are RPG elements. Characters can level up, equip various weapons and armor, and even learn new skills. Second, there’s actually somewhat of a storyline that attempts to bring all of these characters together in a sensible way.

Unlike other fighting games I’ve played over the years, battles in Dissidia are not as simple as just hitting your opponent until they’re dead. There are two main types of attacks in Dissidia: Bravery attacks and Health Attacks. And each character has two gauges: Bravery Points and Hit Points. Bravery points are basically “armor points”. In order to deal damage to your enemy, you must first execute a number of Bravery Attacks. Doing so successfully will leech Bravery Points from your opponent and add them your Bravery gauge. When full, you execute a special attack that does massive damage to your enemy’s hit point, but leaves you in an extremely vulnerable state. As a result, the game is just as much about stat management as it is about combat technique. Once you’ve depleted your opponent’s HP gauge, you can execute a Final Blow that finishes them off. 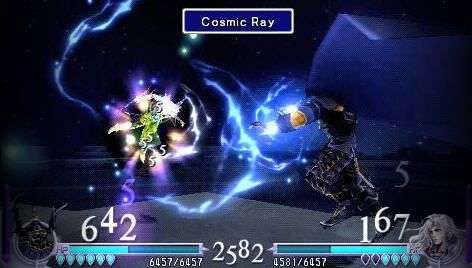 Naturally, this type of fighting action makes Dissidia a great multiplayer game. You can do battle with other players in a number of ways. There are lobby servers that allow for battle matching via the PSP’s wireless connection using a Friend Code system. Players are able to create custom matches and even exchange “Friend Cards” – which allow you to collect special items.  However, if you’re looking for something a little simpler, there’s even a special “Arcade Mode” that strips out all of the RPG elements (armor and weapons) and simply allows two players to do battle on equal ground wirelessly. This is perfect for quick matches. But it is advised that you first complete the game’s single player “Story Mode”. This way you can earn enough points to unlock all of the characters in the game. (Completing the Story Mode also unlocks the ability to participate in something called the Duel Colosseum – a mode of play that rewards participants with trade materials.)

That’s right, when first starting Dissidia, there’s a limited number of playable characters. To unlock the rest, players will need to progress through the game’s Story Mode. This allows you to earn points that can then be spent on purchasing new characters, costumes, and perks. There’s also a few hidden characters that are only available after meeting certain special requirements.

The complete character roster is as follows: 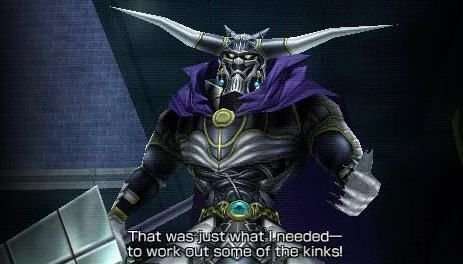 On its surface, Dissidia may seem like a simple fighting game. But when you consider all of the RPG elements, unlockables, and social trading, it’s easy to see that there’s actually quite a bit more than meets the eye. For example, the game also features a fun calendar system. When starting the game for the first time, you will be asked to select a day of the week in which you would most likely play. This day becomes your Bonus Day. Playing the game on your Bonus Day grants you a special point reward. Also, the game features something called the “Play Plan”. Players will be asked to select if they are Casual, Average or Hardcore players. This selection will determine the frequency in which players are rewarded with special bonuses.

The story mode included in the game is extensive and time consuming. There’s a scenario for nearly every starting character. This is a good thing too, because these days most players would be hard pressed to find random people to play with. At the time of this writing, the game is about nine years old. It’s very unlikely that you will encounter other players on the street to exchange Friend Cards with. Unless you have a friend or family member that shares your interest, Dissidia Final Fantasy is likely to be more of a single player experience these days.

I went into this game not expecting much more than a simple arcade style brawler. What I found was a very well put together title, with loads of potential. The graphics and sound are simply top tier for a handheld title, and even the skeleton of the storyline is decent enough to remain interesting until the end of the game. My biggest gripe with this title is the playcontrol. Most of the action is played with the thumb pad, which on a PSP is not a control of particularly good design. I found myself suffering from hand cramps after longer play sessions just due to the overall shape of the PSP and the position I had to place my hands. I do not own a Playstation Vita – so I couldn’t test this for myself, but I’d be willing to bet that these these issues would not carry over to that hardware as it seems to be much more ergonomic. The game also suffers from some annoying camera issues. I would often find myself engaged in a battle and unable to see my opponent. I’d have to break off my attack to adjust the camera angle, thus losing my attack chain or opening myself up to danger.

In summary, I found Dissidia to be a very innovative but somewhat imperfect game. Some of these imperfections are not the fault of the game itself, but rather repercussions of age and the platform in which is was designed for. I’m curious to see how things differ in it’s sequel. 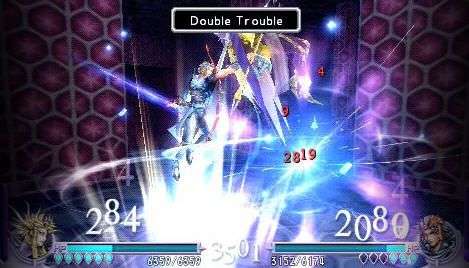 Difficulty: Variable –  On its surface, the Story Mode of Dissidia can be as easy or as challenging as you want it to be. As you play through the story map you can make choices to make your journey either easier or harder. Enemies do get more difficult as the game progresses, but you can always grind and level up to make things a bit easier. Many of the optional challenges can be downright brutal. And as expected, when playing multiplayer against others, you never know what to expect.

Story: The storyline is admittedly weak. It serves only as a barebones excuse for bringing heroes and villains from different Final Fantasy titles together. In truth, people don’t play these kinds of games for storyline. So, it’s forgivable.

Originality: Fighting games are usually very unoriginal things. Dissidia manages to break that stigma by introducing characters with separate storylines and goals and providing a unique leveling system and social interactions. These functions are very well done in their design.

Soundtrack: One of the high points of the game. Dissidia brings back a number of classic Final Fantasy scores and renders them in new and fresh arrangements. The game also features fairly decent voice acting. Well done.

Fun: Fans of brawlers will find a lot to enjoy here. Annoying camera issues and iffy playcontrol can be a damper. The best time will be had by those with friends who can engage in the multiplayer aspects of the game.

Graphics: Dissidia is a beautiful game. The PSP really shines on this title. The characters, environments and even the special effects in battle are all breathtaking.


Playcontrol:  This is where the game really suffers. The camera issues I mentioned are a fairly big problem. Also, some of the controls are just not very intuitive. The layout of the original PSP exacerbate the issue.  Play this on a Vita if you can.


Value:  Finding a physical copy of this game may be difficult and pricing on physical copies can vary. The game is available for purchase digitally on PSN for $10. For the amount of content in the title, this price is worth it for fans.

Overall score (1-100): 70 – For me, Dissidia is an interesting game and one certainly worth the time I invested in it. However, it is far from perfect. The sheer amount of content is its saving grace. Most players would likely be better served by skipping over this debut entry and checking out one of the sequels. But fans of the series can still find a lot to enjoy in this release.